Before I get to the review, I just wanna say this: I finally got what I needed! 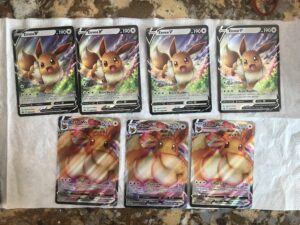 Eevee-V is only available in a tin around October 2020, and tomorrow’s COTD of Eevee VMAX was available from the Shining Fates Elite Trainer Box, which is how I acquired those copies. I wouldn’t say that those Eevee cards will take the meta by storm, but it does have enough things to work with.

This is a Basic Colorless type with 190 HP, Fighting weakness, and a retreat cost of 1. Collect costs a single energy and lets you draw three cards. Brave Buddies costs 3 energy for 80 damage, plus 80 more damage if you played a supporter card during your turn.

Eevee can be splashed into any deck, but it would be better if it benefits from energy acceleration. Perhaps the best use of energy acceleration would have to be Welder, which lets you attach 2 Fire energies. Coupled with your manual attachment, you can actually attack right away with Brave Buddies AND deal 160 damage! That’s how Eevee-V is going to be used as an attacker, except that it is pretty underwhelming due to some reasons:

-Extra investment might be needed to increase the damage output of Brave Buddies (like Vitality Band and/or Powerful C Energy) and Eevee’s colorless typing won’t be able to exploit weakness for double damage.

-You have to keep using a Supporter card every other turn. If you can’t, then you’re stuck with the base 80 damage.

Gallade BKT and Silvally-GX CEC has similar attacks, albeit with different attack names and damage output, but they also have great abilities. They can also exploit weakness with Gallade’s Fighting type or Silvally’s various Pokémon Tools of Memory Cards. Eevee doesn’t have any of those to exploit, so I don’t think Eevee will pick up where those two Pokémon left off. Eevee VMAX, however, fulfills a different role that today’s card, so I’ll save that story for tomorrow.

Eevee-V can double being an attacker using Brave Buddies or being a stepping stone to evolve into Eevee VMAX. A deck can be made using Eevee-V, with or without Eevee VMAX, but I don’t know how successful those hypothetical decks can be. The only place I’ve seen that Eevee could be used competitively would be from both a Twitter post AND PTCGradio’s video, but even that goes a long way to being viable through luck, and that kind of strategy can be completely circumvented by using a Switch card, eliminating the need to flip coins.

Eevee V (SW – Black Star Promos SWSH065) is one of the promo cards I almost forgot about.  It is a Pokémon V, giving up an extra Prize when KO’d, excluded from using certain support, and made vulnerable to certain counters the same as all other Pokémon V.  Being a Pokémon V isn’t all bad, however, but I’ll address the benefits as we come to them.  Eevee is a Colorless Pokémon, which is probably the worst type.  Not having to worry about Resistance does not balance out never being able to exploit Weakness.  There are no longer any anti-Colorless effects in Standard, but there are one or two in Expanded that might matter, and while Colorless support exists in both Formats, it hasn’t really proven useful in a while.

Eevee is a Basic Pokémon, so it requires no additional cards to hit the field, nor waiting to evolve.  It can more effectively make use of certain card mechanics due to the previous two aspects of being a Basic, and it can even be your opening Active.  Both anti-Basic and Basic support exist, so that seems to be a wash right now… but the first few points mean being a Basic has been and remains the best.  We finally reach a stat influenced by being a Pokémon V; Eevee V has 190 HP, nearly three times more than baseline Eevee cards.  This is still low for a Basic Pokémon V, but overall more likely to survive a hit than not.

[F] Weakness is relatively unimportant right now, but that may change with the release and eventual legality of SW – Battle Styles.  Yes, I have said something many, many, many times before, but it is true; Fighting Weakness is found on many prominent cards, so there’s basically a power vacuum longing to be filled.  Maybe the cards from the new set will once again fall short, but be ready for them to succeed if you’re running Eevee V.  No Resistance is the worst, but -30 in a single match-up usually doesn’t make a lot of difference.  A Retreat Cost of [C] can, however; easy to pay and to recover from having paid much of the time.

Eevee V knows two attacks.  For [C], it can use “Collect” to draw three cards.  Like many Supporters-as-attacks, this isn’t good.  It isn’t too bad, though; if you’re stuck with Eevee V Active and were going to try to build it up anyway, you may as well use your attack as a Hop.  Even though Hop is a weak Supporter, drawing three cards is rarely a bad thing, just not usually good enough to be worth it when there’s an alternative.  For [CCC] Eevee V can attack with “Brave Buddies”, this does 80 damage plus another 80 if you’ve played a Supporter card this turn.  80 for three is weak, though it can be an almost decent supporting attack if you can easily meet the cost.  If you use something like Welder plus your manual Energy attachment, you can take Eevee from zero to attacking in a single turn… and Welder is a support, so you score a much better 160 for three.

Eevee V isn’t a good card, but I wouldn’t call it bad, either.  If it had another 20 HP, then it would be “average” in the good sense.  There’s a little more to discuss here, as Eevee V can evolve!  Eevee VMAX exists, and we’ll review it tomorrow.  The main thing to understand is that as a lead-in to a Pokémon VMAX, Eevee is much better than as a stand-alone card.  Not enough I’m going to up its score, but enough to be worth pointing out.

The Expanded Format adds a lot more support options for Eevee V, as it gains access to cards like Double Colorless Energy and Muscle Band.  Even if you still go the Welder route, you can try to Welder two Fire Energy, manually attach a Powerful [C] Energy, attach a Fighting Fury Belt, and you have a Basic attacker with 230 HP, doing 200 for three.  However, you can use most of the same support with much better attackers, so I still cannot bring myself to give it a higher score.

If you’re an Eevee-lover, you may not like that I gave this card a two-out-of-five.  I don’t hate Eevee.  Like most people I know who know Pokémon even a little, I have a soft spot for it.  Maybe that is why I’m not cutting it as much slack as I did some other cards we’ve reviewed over the last few weeks.