Disney Villainous is a game that made a huge splash at GenCon 2018 in August.  The game was extremely popular at the Ravensburger / Wonder Forge booth over the weekend. Ravensburger had completely sold out of the game by Saturday morning.  Villainous was so popular that they had a signup sheet just to play the demo. Demos windows were 15 minutes long . My daughter signed up for the demo first thing Saturday morning, and the earliest time slot available was late Saturday afternoon.

Some games you can demo and learn in 15 minutes, but Villainous is extremely tough to demo in 15 minutes.  Why?  How do I put this?  This game is strange, bizarre and different!  Everyone is kind of scattered about the gaming table doing their own thing.  Everyone has their own Disney themed villains deck, and everyone is basically playing a completely different game of solitaire at the exact same time.  This is NOT a bad thing, but it is difficult to convey the rules to new players in a 15 minute time frame.  So hopefully I can give you a better understanding of game play now! 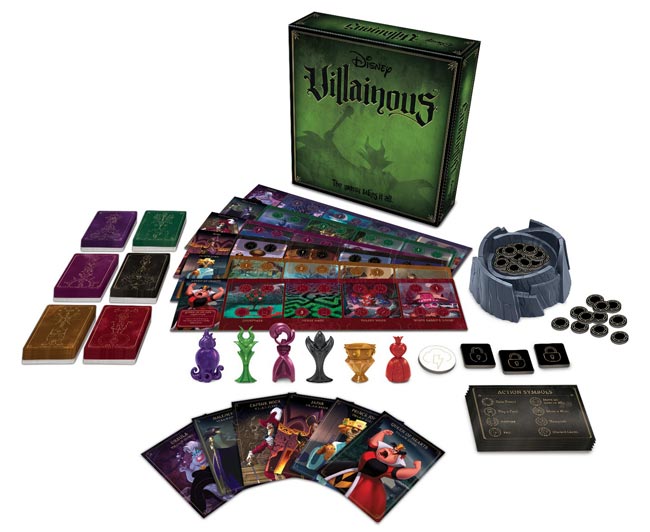 Villainous is a Turn-Based Board Game / Card Game for 2-6 players.  In Villainous, each player takes on the role of a different Disney Villain.  In this base set, you will either be: Maleficent, Ursula, Jafar, Prince John, Queen of Hearts, or Captain Hook.  The villains will try to succeed in this game where they failed in the movie.  How?  Basically:

How Does Villainous Play?

Each player takes one of the 6 theme decks and the corresponding game board.  Each game board has 4 different locations corresponding to places in each Disney Movie. For our example, we’ll be looking at Jafar’s deck.

Above is Jafar’s game board (every player has a different board).  Jafar’s game board locations are: Sultan’s Palace; Streets of Agrabah; Oasis; and Cave of Wonders.  These are straight out of the movie.  Jafar’s objective is noted on the left.  For Jafar to win, he must start his turn with the Magic Lamp at Sultan’s Palace and have the Genie under his control.  And he must do this before any other player achieves their goal.  Each turn, you move your Villain to a different location on your board, and take the actions there.  Each location has 3-4 possible actions you can take.  It’s not easy to decide where to go, as every location has something good for you!

Other players are playing other Villains at the exact same time.  You are the only player with the Jafar cards.

Each player will start with a 30 card Villain Deck and a 15 card Fate Deck.  Each player starts the game with 4 Villain Cards.

The Villain Deck has cards that will help you win the game. Here are some examples of Jafar’s Villain Cards:

The villain deck contains Allies, Conditions, Items and Effects.  Some require a cost in Power/Money to play.

The Fate Deck contains cards that your opponents can play against you during their turns.  These are obstacles you have to overcome.  Fate Heroes will also block off the top 1/2 of each location. This cuts each location down from 4 Actions down to 2 for that player! So you need to defeat the heroes to get all 4 actions spaces back.  But many players also need these cards to win the game!  Here are some examples of Jafar’s Fate Cards:

So how do you achieve your Goal in Villainous?

What Actions can you perform?

If you are the first player to complete your Objective – You Win. 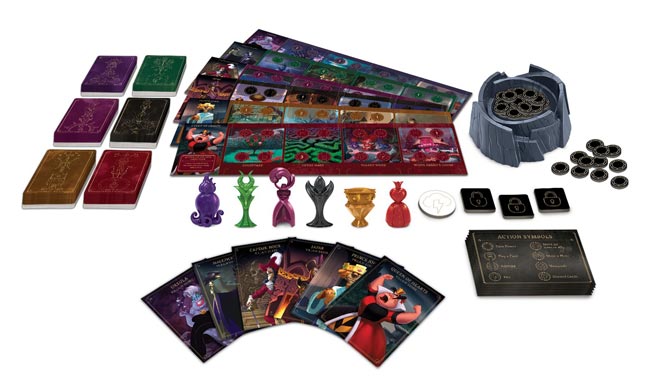 First off, this is not your typical kiddie Disney fare.  This game is a basically a Pre-Constructed Trading Card Game Set hiding inside a Disney Box. Difficulty-wise, I don’t consider this a kiddie game. The box says ages 10 & Up.  That basically means 5th graders and up.  If your kids can play deep strategy games by then … Great!  Just know, that there’s a lot of depth here!  I certainly wouldn’t expect kids under 10 to grasp this.  I’d guess 12 & Up if someone had asked me my opinion.

During your turn, you will usually be taking 4 actions. But these decisions are not easy!

Oh wait, are you even paying attention to what the other players are doing?  Remember, if they compete their objective before you do, they win!  So:

The game is confusing and fun, all at the same time!

I have played through this game 3 different times with 2 and 3 players.  It has taken about an hour each time.  Once you have had one play-through, it’s fairly simple to understand the game.  That’s where the simpleness ends though.  There is a lot to strategize in order to beat your opponent.  You have to thin your deck as fast as possible, get your winning conditions put together, and slow down your opponents.  It’s a deep game and I’ve enjoyed it.  I’m looking forward to seeing new Villains – The sooner the better!