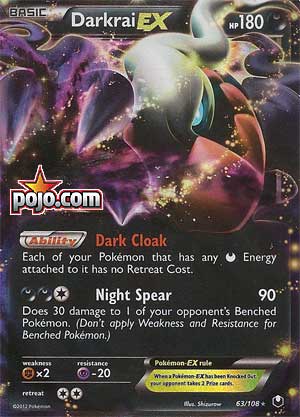 Hello readers! Vince here with another late card review! This time, I go back to a card that I enjoyed using during my time when I was able to play at a local league. The subject is Darkrai-EX (BW Dark Explorers 63/108, 107/108, BW Black Star Promo 46, BW Legendary Treasures 88/113). It was reviewed three times by the Pojo crew: as the second best card of BW Dark Explorers (https://www.pojo.com/COTD/2012/May/17.shtml), the second best card of 2012 (https://www.pojo.com/COTD/2013/Jan/3.shtml), and he third best reprinted cards of BW Legendary Treasures (https://www.pojo.com/COTD/2013/Nov/13.shtml). It did not make into the list of top 10 cards lost to rotation in 2015. Those reviews are definitely dated, as a lot of things have happened between the time they last chimed in and today. Fortunately, many of the great aspects that they said before about this card can be said for the Legacy Format because that format contains HGSS-era and BW-era sets.

We now get into this card. Being a Pokémon-EX would mean extra HP, better attacks/abilities, and/or some EX support, but at the same time, being excluded from certain cards as well as anti-EX cards trying to hinder EX Pokemon (Safeguard users and Silver Bangle). Being a Basic is usually the best as it can be put into play without needing the cards under it as a prerequisite. And it takes less deck space. 180 HP was the highest amount of HP as a Basic Pokémon when it came out, though now a Basic Pokémon can have HP as high as 250. What used to be safe from a OHKO is suddenly not safe from OHKOs, even 250 due to certain card combinations that can boost damage output. Th Fighting weakness is dangerous before and is still dangerous now. The time where you have to watch out for Terrakion and Landorus-EX, now you must watch out for Lucario-GX, Diancie Prism Star, and Buzzwole-GX. Cheap attacks that can OHKO due to weakness may deter players from using a particular card, and you can’t blame for their reasoning. Taking 20 less damage from Psychic Pokemon is a bit useful; Garbodor will need one more item in your discard pile to break even, and Mewtwo-EX will need one more energy to break even as well. And a retreat cost of two is neither here nor there: not legal for Heavy Ball and not easy to pay (though it would not matter to this card, as we shall see). 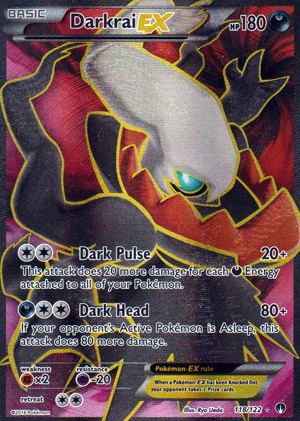 Darkrai-EX sports an ability and an attack. It’s Ability, Dark Cloak, states that if any of your Pokemon has any dark energy attached to it, that Pokemon has no retreat cost. During that time, it wasn’t just Basic Dark energy that counts, there’s also Special Darkness Energy, Rainbow Energy, Blend Energy GRPD, and Prism Energy that also provides dark energy. This is an awesome ability that saves you from needlessly discarding energies just to manually retreat. Night Spear costs DDC for 90 damage and also does 30 damage to one of your opponent’s Benched Pokemon. Not a bad value as it can 2HKO at the time, but for right now, it has to be shooting for 130 to make it worthwhile. Still not a bad attack, though, but it’ll take quite some investment if you want to go beyond limited damage output, be it Choice Band and Devoured Field.

Darkrai-EX came out at the time where BW Dark Explorers contained some Dark type support so that a new deck can be made. Of course, you got this card. You also got Dark Patch for putting a Basic Dark energy from the discard to one of your Benched Dark Pokemon. And you got Dark Claw which grants a +20 damage boost for Dark Pokemon. As new sets continue to release, there are some more support for Dark types; be it Hydreigon PHF, Shadow Circle, and Yveltal-EX as another powerful attacker. Looking at some World Championship decks that used Darkrai-EX, it was used in Pesadelo Prism by Igor Costa and Darkrai Deck by three time world champion Jason Klaczynski. The former was a deck utilizing Darkrai-EX and Mewtwo-EX to overwhelm the opposition while the ladder has Darkrai-EX accompanied by Sableye and Keldeo-EX.

Of course these aren’t the only ways to use Darkrai-EX. There’s also Darkrai-EX/Hydreigon with its Energy Trans/Max Potion combo that made it difficult to KO if they weren’t able to OHKO you. Even if they fall short of a KO, like surviving with 10 HP left, all damage will be flushed away with Max Potion without penalty due to having no energy in the first place; you move the energy from a damaged Pokemon to another Pokemon, heal it, and then put it back on that Pokémon. You also got Turbo Darkrai where they use Darkrai related cards to overwhelm the opposition. This card, another Darkrai-EX from XY BreakPoint, and Darkrai-GX were the focus of that deck. The BKT version has Dark Pulse which does 20 plus 20 more for each Dark energy attached to all of your Pokemon. This card provides free retreat, and Darkrai-GX resurrects itself from the discard pile onto your bench, plus a Basic Dark energy. Max Elixir provides opportunities to accelerate energy and keep it as a placeholder for Dark Pulse, and Shaymin-EX is for extra draw power when you used up your Supporter for your turn. I’ve seen Turbo Darkrai decks more frequently than the world championship decks or the Max Potion combo, and needless to say, they made quick work to me.

So Darkrai-EX can do many things, but it’s not invincible. Just looking at what’s been used more frequently now, it’s mostly Buzzwole-GX, Lycanroc-GX, and Lucario-GX, with some including Gardevoir-GX and Zoroark-GX. I don’t think Darkrai-EX can last long in Expanded. Add in ability lock, and Darkrai-EX’s pretty much nothing. In Limited, it’s a nice pull that can be used in a +39 deck. Do mind that there are plenty of Fighting Pokemon in BW Dark Explorers and BW Legendary Treasures.

Conclusion: Like many older cards, Darkrai-EX went from being the most hyped card that players will heavily play into being a useful Pokémon while being a decent secondary attacker. Power Creep may have gotten the best of old cards, but one cannot forget the legacy Darkrai-EX brings to the table.