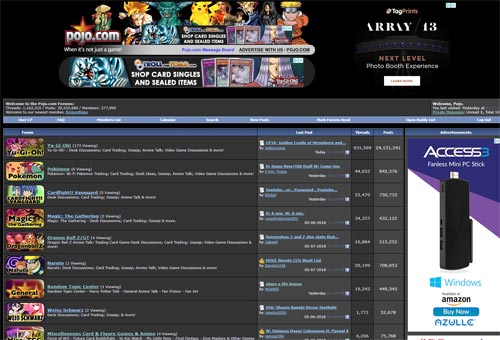 A few years ago, I had a relatively short tenure as a mod on the Pojo Forums.  I left due to the overall experience being too stressful and decided to simply go back to just being a Featured Writer.  In my brief time as a mod, I set out to accomplish respectable goals.  However, since I was much newer to the forum than the other mods and even many of the regulars, there were many little things I never was aware of at the time.

1) Make friends with other users.  Being friends with some of the users on the forums, even the ones that seem disrespectful, could be a good way to gain understanding of what exactly is going on (because it’s impossible to watch everything at once).  I wish I had made friends with more members.  However, a few I did talk to were able to help me do my job by linking me to posts that needed moderating, whilst also letting me know when not to moderate.

2) Don’t try to change the culture all at once.  I didn’t like that some of the Yugioh sub-forums on Pojo had a general culture of disrespect, ridicule and a desire to take knowledge without sharing it.  It was never really my place to decide these things, but I think it would have been better to gently influence it into a positive direction rather than trying to force it to become sterile all at once.

3) Setting some standards does make a difference.  In the Forbidden/Limited list forum, I added a rule that topic creators must explain the reasoning behind the choices they want rather than just posting a thread with vague opinions (on especially controversial topics).  I had to lock at least 50 threads, but while I was on the forum, this did result in members trying to communicate the reasons behind their views, as an actual discussion should.

4) Understand the context before penalizing someone.  On various occasions, I’ve sternly warned people for writing angry and mean-sounding posts.  However, in some of those cases, I later realized that they did have a justifiable reason of being angry.  For example, a person who is tired of misinformative posts and insults the topic creator.  In those cases – instead of exercising any power against them – I should’ve noted that their intent of helping readers find better quality content was good while asking them to be a bit more polite about it.

5) Don’t waste time arguing.  With other members, why do it?  If I’m right, I don’t need to justify.  If I’m wrong, I shouldn’t.  In uncertain cases, give the benefit of the doubt.  Arguing with fellow mods?  A pointless exercise that didn’t end up well for me.

6) Prioritize.  I focused a bit too much on rectifying little nitpicks and very minor offenses when I really should’ve allocated my time toward regulating the kinds of posts which had a broader impact.

7) Encourage good behavior.  As a mod, I often made posts and threads about bad behaviors to avoid and things I felt like were not doable.  But a better way to do this would have been to post good things.  One example, Riko took my “Don’t make Low Quality Posts” thread and turned it into “How to make Good Quality Posts” thread, and I thought that was a great thing he did.

8) Listen to what the “haters” are saying.  A portion of people on the forum can be mean at times and they feel like the website is not worth taking seriously.  Maybe they are just jerks.  But it’s also true that maybe they have valid criticisms of the website that can be useful.  In some cases, I messaged some of the more negative-sounding members: the ones that have made many valuable posts but also just as many “lol stop being a salty noob” posts.  I expected them to troll me or ignore me, but quite a few of them actually wrote me a genuine and constructive reply which showed they actually care about the forums.  With the majority of the members on the forum, I found that if you approach them genuinely and they feel like their opinion is respected, they will treat you like a human being and actually put effort into making a meaningful response rather than just saying “lol fail noob”.