Cannot be used as Synchro Material, except for the Synchro Summon of a “Majestic” monster. This card’s name becomes “Majestic Dragon” while on the field or in the GY. When you draw this card: You can reveal it; Special Summon it from your hand, then, if you control a Level 8 or higher Dragon Synchro Monster, you can Special Summon 1 Level 1 Dragon monster from your Deck. You can only Special Summon “Converging Wills Dragon(s)” once per turn.

You have three targets, and while two require specific Dragon Synchro monsters, the one that doesn’t is a level higher, making it not as easy to summon (Level 11 vs 10). Despite that, you could summon something like Shooting Star Dragon and then summon Converging Wills Dragon and go for Shooting Majestic Star Dragon (Friday’s CoTD).

Converging Wills Dragon is an improvement necessary for the Majestic archetype. The original didn’t help much with getting you to your end goal and had 0/0 stats. This version of the card does everything you want the original to do.

Stardust Week is going to be a fun one and we start the week with the Majestic Dragon retrain we needed for years: Converging Wills Dragon.

CWD is a Level 1 LIGHT Dragon Tuner with 0 ATK and DEF. Tuner’s stats don’t usually matter, but being a LIGHT Dragon is great. You can only use this monster as a Synchro Material for a Majestic, but it’s treated as Majestic Dragon on the field or in the graveyard. Becoming Majestic Dragon is good, just disappointing the restriction has to remain after all these years. When you draw this card, you can reveal it to Special Summon it from your hand, then if you control a Level 8 or higher Dragon Synchro, you can summon a Level 1 Dragon from Deck of your choice, minus Converging Wills Dragon since it can only be Special Summoned once per turn. A free Special Summon on a Tuner is good, even if you have to hard draw it, but at least we can stack it on top of Deck and draw it that same turn off one card, or just run T.G. Hyper Librarian. Only being able to Special Summon this once can get annoying when summoning your Majestic monsters, especially if you want the original Majestic Star and its retrain, you’re just fine running the new one anyways. This card isn’t the greatest, especially in the opening hand. You just put it in the Deck to use with the other cards to try and summon your new boss, then you basically got all the use out of it. You’ll run it in Synchrons, just wish the Majestic Dragon retrain was a bit better.

Art: 3.5/5 Majestic Dragon mixed with the Crimson Dragon I guess?

Stardust week is upon us (shoutout to our pokemon go players) and I’m excited.  Covering Wills Dragon is a Level 1, Light/Dragon, also a Tuner with 0 attack and defense.  Like most Tuners, the atk/def values are moot, but Light and Dragon are always a wonderful pairing.  So we see this can only be Synchro Material for a ‘Majestic’ Monster, and this card becomes Majestic Dragon while on the Field or in the Graveyard.  You can reveal this in your Hand when you Draw it to then Special Summon a Level 1 Dragon from your Deck.  You have to control a Level 8 or higher Dragon Synchro to do this, so it won’t always be able to do that for you.  A free Monster, likely another Tuner, which can help you Synchro up from Stardust or Red Dragon Archfiend, whatever you happen to be running.  You can’t loop or abuse this card with itself, as you can only Special Summon this once per Turn.  Fine enough, I don’t think that was necessary, cause even a few Tuners dropping at once shouldn’t be a catastrophe and it still needs its condition to be met.  It is a slight improvement over Majestic Dragon, but not a great one, unfortunately.

Art:  Speaking of Majestic Drago, this guy looks like his drugged out cousin or something.  Majestic Dragon definitely got the better art.  3/5 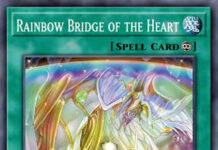