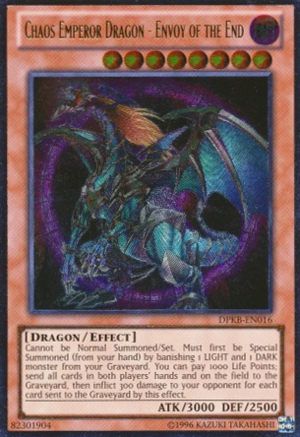 Noteworthy mentions:
* No cards were Forbidden yet.  This is the last format before cards were banned.
* D.D. Warrior Lady and Mystical Space Typhoon are still at 3.
* Chaos Sorcerer was at 3, but Chaos Emperor Dragon and Black Luster Soldier (EOTB) were Limited to 1. 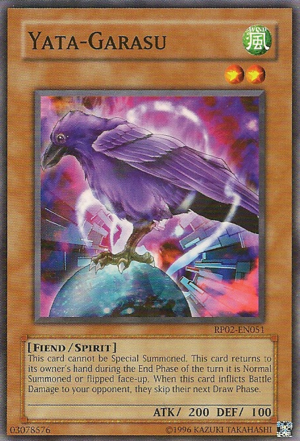 In some ways, CED-Yata was the apex of broken-ness in Yugioh.  Chaos Emperor Dragon could nuke the entire field and both players hands.  CED allowed players to easily deal thousands of life points worth of damage at once, especially if they landed a brutal attack from CED first.  Another win condition: if CED nuked your face-up Sangan or Witch, you could use it to search Yata-Garasu which could instantly Yata-lock the opponent.

These degenerate elements can unfortunately be very annoying at times, and a ban list was needed eventually to make room for new cards and strategies.  However, upon testing this format for a dozen or so games, I found that it’s not as lethal and chaotic as many would think.  Until a player draws into one of their two Chaos monsters (and has a worthwhile opportunity to use it), the games are actually quite slow-paced and tame.  There are power spells, but players often save them until they could combo them with powerful monsters.  But since many of the best monsters in this format are relatively weak, players will be poking each other with cards like Witch, Mystic Tomato and DDWL until substantial plays could be made.  Also, the hand removal cards like Confiscation can preclude CED entirely.

Overall, it’s a slow cozy format, which has potential to become extremely lethal at any moment.

Miscellaneous observations: Painful Choice is just crazy at this point.  Tomato is still good for searching Witch/Sangan, but with DDWL around to counter it, it’s not quite as assential.  With low trap counts and weak monsters, Airknight Parshath is a better choice than Jinzo in many cases.  However, keeping the number of LV5+ monsters in this deck low is important; there are already a lot of power cards in the format (which benefit from being held onto) so having too many potentially dead-draw monsters is ill-advised.

These are examples of deck lists you may find in this format.  Chaos was the standard, apart from weird OTK’s involving cards such as Butterfly Dagger – Elma.  Decks needed LIGHT’s and DARK’s, as well as the many staple cards which have been increasing over the months prior to this format, so the deckbuilding is creatively limiting.  However, there is some discretionary room for what LV4 monsters you would like to use for battle.  Please forgive my disdain of Cyber Jar, Fiber Jar and Magical Scientist.  Many players still used them, especially Scientist.  Also Mirage of Nightmare (combined with a spell like Mystical Space Typhoon) was a good combo for card advantage that a portion of competitive players used. 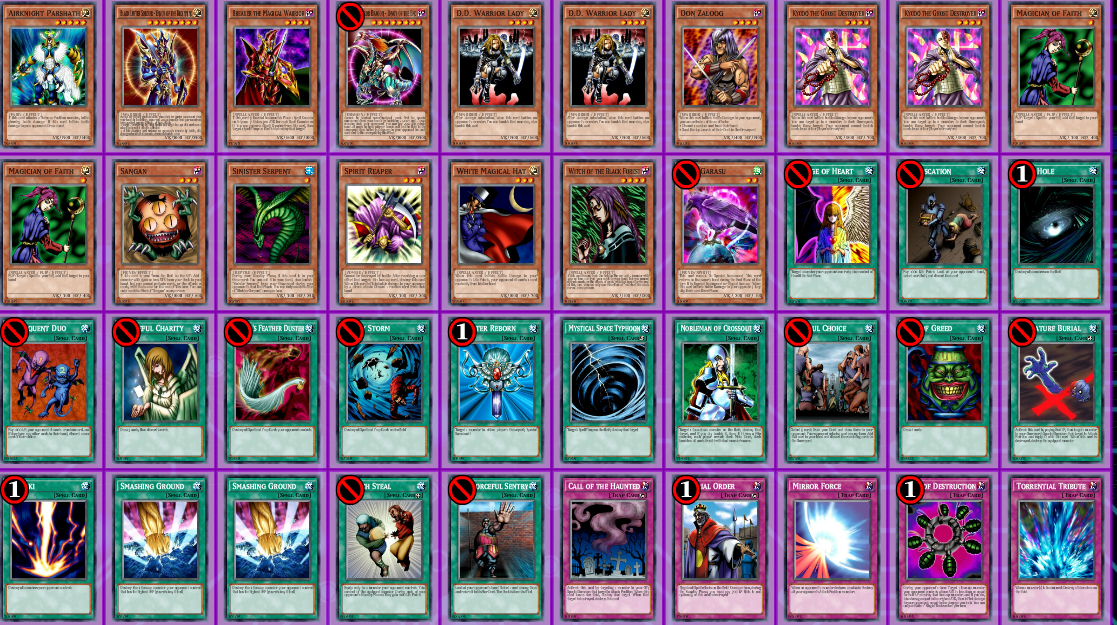 Since this meta is so spell-focused, there are less resources spent on protecting life points with monsters and traps.  As a result, getting direct attacks and triggering effects via battle damage can be a great way of reducing the opponent’s arsenal to preclude late-game power plays. 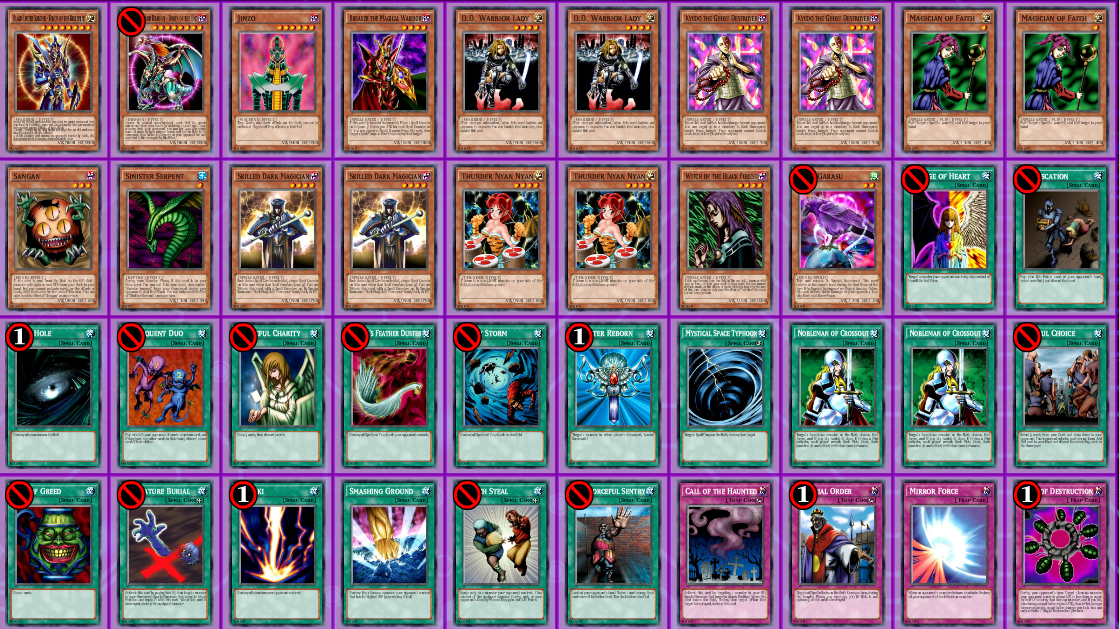 I’m not claiming this to be the best deck of the format, but in an era of weak monsters, these beaters can stomp, deal damage and force removal to be used on them.  The 2nd Nobleman is used because the opponent may be more inclined to play defensively against beaters. 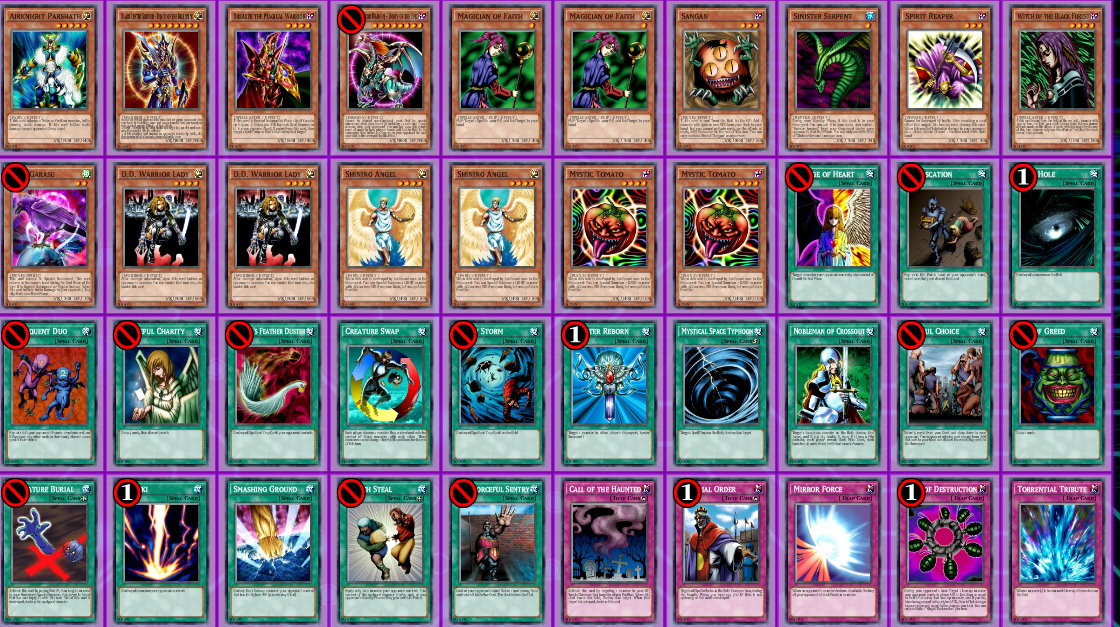 With Witch of the Black Forest still legal and D.D. Warrior Lady unrestricted, there are ample search targets for Mystic Tomato and Shining Angel.  In an era of weak monsters, these recruiters can hold their own and provide fuel for powerful Chaos plays.