Cities: Skylines is a new “Cooperative” Board Game from Kosmos Games.  Players work together to plan, build and manage a growing city.  Your team starts with a blank canvas, and you design and build your city from the ground up.  During the course of the game your team will continually have to monitor in factors like: Water, Electricity, Traffic, Garbage, Pollution, Crime, Education, Residential Areas, Industrial Zones, and a whole lot more.

Cities: Skylines – The Board Game is based on the extremely popular Cities: Skylines Video Game series which has sold over 6 million copies worldwide.  There are certainly a lot of people out there who like city building sims.

What is Cities: Skylines?

Back in 2015, Paradox Interactive released a video game titled “Cities: Skylines” to a hungry population of City Building Simulation Video Gamers.  The City Building Sim crowd had become increasingly dissatisfied with the SimCity video game Franchise.  SimCity’s 2013 release was a huge letdown to Sim fans.  Paradox stepped in with some fresh ideas and provided fans with a fantastic City-Building game that has now been released on Windows, Mac, Playstation, Xbox and the Nintendo Switch.

What is the Cities: Skylines Board Game?

In October 2019, Kosmos Games released a cooperative board game version of Cities: Skylines.  The game can be played with 1-4 players, Ages 10 & Up.  The Box says the Game Play Time is 40-70 minutes.  The board game version was designed by Rustan Hakansson, who designed the Tribes: Dawn of Humanity board game we previously here on Pojo.

Kosmos has tried to capture the building simulation excitement of the original video game, and transfer it to the board game.  Teams will have to plan and place their Tetris-based building pieces onto the board, and make the city fit the landscape the best they can.  And they will also have to try to get all their districts playing nicely together. 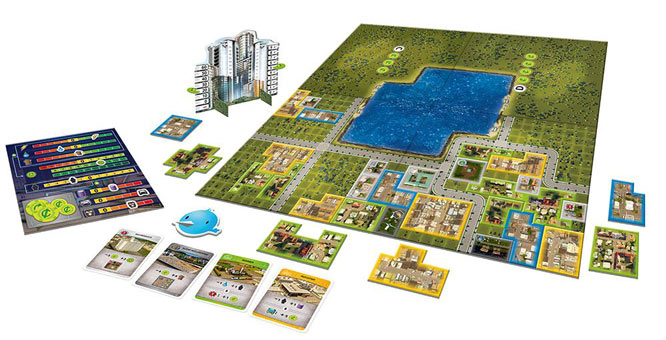 As you might expect with a building simulation game, there are a lot of pieces here! And thus, you will have a lot of cardboard punch-outs to press out before your first game.

Here are all the game materials you will find inside the box:

As you can see, there are a lot of pieces in this game.  I’m guessing this will not be a surprise to the Video Game players out there though.

How does the Game Play?

There is a lot going on in this game, but Player’s turns are pretty simple.  During a player’s turn they can do one of three things:

That’s it!  The only difficult thing for a player each turn is determining what is actually the best move for your team.  You have to pay attention to the Administration Board, your Construction cards, your Role Cards, the Landscape, and your Building Tokens.

Above is a look at the Administration Board.  This is where your team keeps track of your:

If your City maxes out in the “Red Areas”, you will not be able to play any Construction cards that would make your levels go beyond the maximum allowed value for each.

Finally, your City’s Happiness is basically how you track how well your team is doing.

Pictured above, is a hand I had last night:

If you decide to construct one of your cards, you then take the matching building token and place it anywhere on the city board.  Utility and Service Buildings have specific building tokens.  Residential and Commercial Zones are Tetris-like Pieces, and you can take any of the matching zone tokens and fit them in the best you can.

Your board will eventually look something like this during the course of the game:

Role Cards can be passed out at the beginning of the game.  Each Role Card will give each player a unique Special Ability that can be used during their turns.

Likes, Dislikes and Final Thought for Cities: Skylines – The Board Game

Cities: Skylines is a very good Cooperative board game.  As I mentioned earlier, your team’s success is pretty much completely tied to your team’s decisions.  There is no A.I. gunning for you like there is in Pandemic.

This is a game you would ultimately plan your Game Night around.  Skylines is not a filler game.  You should plan at least 90 minutes for a 4-player game.  This is the type of game you: invite friends over for; Break out some cold ones; Roll up your sleeves; And get down to the nitty gritty.

One of the weird things about this game, is that your team does not really have a clearcut win.  There is an arbitrary “Success Table” on the back of the rulebook.  The Success Table gives you an idea of how your group finished up based on your City’s Happiness.  Bad Cities are: Dying Cities; Ambitious Cities; and Busy Cities.  While Good Cities are: Showcase Cities; Boom Cities; Grand Cities; and Heavenly Cities.  There is no clear-cut win here like there is in Pandemic.  I’m not sure if typical gamers will like the Success Table.  Do you like to simply get together with friends and play fun games?  Or, does your gaming group want a cutthroat type victory?  Will you feel better if you build a Grand City over a Boom City?  Maybe?

During your first play through, you might paint one of your important city buildings into a corner.  You might place a Police Station into a tiny little district not realizing it would have been better placed somewhere else.  This is the type of thing that will keep you coming back for more.  After early playthroughs, your group will say something like: “Man, we could have done that so much better!”

If your gaming group / family is into Coop Board games, then this is a fine addition to your Gaming Library.  This game is I know our gaming group will be coming back to.

And, I’m banking on Kosmos getting a professional “How to Play” video up on the internet fairly soon.