I feel that the last few Magic releases, going back to Throne of Eldraine, all go together really well. This version of Chandra could be thought of as “Cinderella, if instead of fleeing the ball at midnight she started lighting things on fire”. That’s particularly the case of the alternate art, which really emphasizes the “dressed to kill” phrase in its usual metaphorical use, rather than its literal one. 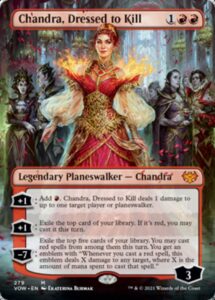 It wasn’t too long ago that Chandra had another three-cost planeswalker card that I got quite excited about; while Acolyte of Flame is highly aggressive with a late-game bonus, this version is more of a midrange card with a typical game-ending ultimate. She works best in a mono-red deck, but you can get around that with careful deck construction (eg. lots of Ravnica gold cards), and I think many decks can use some additional mana now and then. This version of Chandra is more dependent than some on what else is in the deck with her, so you’re not going to just throw her into any deck that can cast her or into a “good stuff” scenario. But in a mostly red deck, she can easily catch people off guard and do some serious damage.

The newest Chandra seems to be in a particularly interesting space: more of a mono-red supportive angle than anything else. With a pair of +1 abilities, but no way to protect herself, she’s an engine card that requires a bit of help to really shine.

So, her two +1 abilities aim to accelerate; the first is an extra red mana (and burn damage), while her other is functionally an extra card in mono-red decks (or getting past a land). These are not game-breaking, though going from 3 mana to 5 can be nice, and she even lets you do a one-drop on the turn she comes out to play if on curve. Her ultimate is quite the attraction, turning any red spell into a massive blast of fire on top of that spell (and functionally drawing you five cards). Her other two abilities are quite incremental, so it’s really building into her -7, which asks you to protect her long enough to immolate the building.

The question of if Chandra, Dressed to Kill is worth it isn’t an easy one to answer; she has a clear weakness in her inability to protect herself, and she’s not explosive enough for some decks. But there will be some that like her distinct mix of abilities, and I think she’ll play decently as a bit of an engine card in the enterprising red deck.

Constructed: 3.5
Casual: 4
Limited: 4.5 (not as vicious in Limited as most planeswalkers, but she’ll get there if an opponent can’t answer her)
Multiplayer: 3
Commander: 3.25

Three mana for a pretty good planeswalker is always a joy to open up in booster packs. Three loyalty is kind of low, it puts this card within bolt range but the bolt risk aside it is a pretty solid and not overpowered card. The first +1 is good but would be better if it was any target although hitting a pesky planeswalker for one so they can’t activate a minus ability can and will still come in handy. Even in a burn deck the damage to the opponent will wear away at them each turn and will get annoying to the point they have to address this card. The second +1 ability might be more valuable than the first +1 ability because you can gamble by looking at the top card and being able to play it, first thing that comes to mind is if you’re mana screwed and you need to top deck a land right now. I think the two plus one abilities are where this card will shine, the ultimate being a -7 is tough to get off when you only have +1 abilities and you’ll be a target before you can go off. If you’re in a planeswalker deck or a proliferate deck this could go off and if it does you essentially win the game. I like this card, want to love it, but it is yet another example of having to dumb down the power level of planeswalkers so they are not broken.

Voice of the Blessed – MTG Crimson Vow Card of the Day