Cause everything is better in threes, right? Hello Pojo Readers, Crunch$G here to discuss the most recent F/L list that dropped on October 9th and is scheduled to go into effect on October 14th (the day they said the new list would be ready no sooner than). There are a few changes on this list, mostly stuff coming off the list, so I’m here to give my opinions on these changes and if they make the game better. 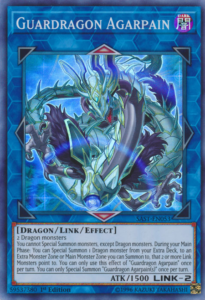 First off is the Guardragon that probably felt the most obvious to hit if Konami was going to go after these cards, Agarpain was the perfect hit to help neuter Dragons in the meta so they don’t get too powerful. Agarpain easily brought out monsters from the Extra Deck that probably shouldn’t be able to be summoned with such ease. You had options like Odd-Eyes Vortex Dragon, Hot Red Dragon Archfiend Abyss, Crystal Wing Synchro Dragon, Number 38: Hope Harbinger Dragon Titanic Galaxy, Borreload Dragon, and Borrelsword Dragon just to name some of the best options for a plethora of different decks, though you’d mostly go for the non-Link monsters and it’s most likely between Odd-Eyes Vortex Dragon or Hot Red Dragon Archfiend Abyss depending on what you’re playing since the others aren’t as hard to summon. Agarpain made Dragons a forefront contender for the meta, especially with Striker Dragon coming soon, so it’s nice to see this out of the game. 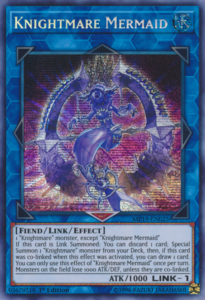 The second ban on this list is another Link, this time being one directed towards Orcust. Knightmare Mermaid allowed for so many different decks to abuse the Orcust package if they could easily put two monsters on the field to go into a Knightmare Phoenix or Cerberus. A few even ran Knightmare Corruptor Iblee in the main deck, which means you don’t need the extra monster to go into Mermaid. Without Mermaid, you cannot just throw Orcust into any deck and expect it to work, but it doesn’t kill Orcust as a whole. The deck is still very playable, just not as an engine for literally any other deck. I mean, we had Lunalight Orcust and Cyber Dragon Orcust just to name a few, and there could of been more options later with Mermaid in the game, so this card needed to go. 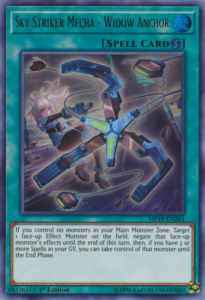 The lone limitation on the list is one to hinder the Sky Striker archetype. Widow Anchor gave the deck consistent negation and potentially monster stealing all while being able to easily recycle it with Kagari and Multirole (despite the two going to 1 on previous lists). Widow Anchor now joining the other three Sky Striker cards that are now limited will really hurt the strength of the deck since their negation capabilities are not as plentiful if the one Widow Anchor gets banished from retrieving it with Multirole, but the deck probably isn’t dead just yet since they still have a ton of different options, just a little less to do on the opponent’s turn. 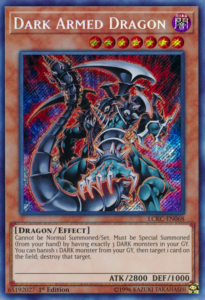 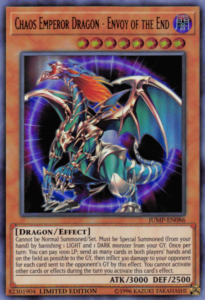 Now it’s time to get to the many unlimitations on this list, starting with one we all probably saw coming since the card got its errata to the TCG and came back to 1 to begin with. I feel I’ve already talked about Chaos Emperor Dragon a lot in these articles, mostly because they slowly moved it off the list instead of just putting it to three like the OCG has had for years. This card is still a shell of its former self and will probably not make a big impact in the game, though three of this and three of The Melody of Awakening Dragon does make it as consistent as you can possibly get, I doubt that’ll mean anything in the long run. Another card who lost all of its playability due to an errata. 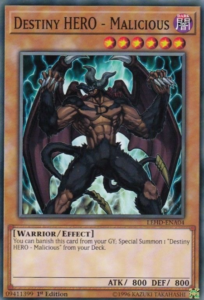 A card that’s probably moved back and forth between 2 and 3 the most, Malicious is fine to have back into the game considering DARK Warrior decks have lost a lot of their win conditions over the previous F/L Lists. Summoning another Malicious from the deck is fine considering the Malicious can only really be used as material, but now you can banish a second Malicious to get a third one for more plays. Malicious probably won’t be as good and won’t make Warrior decks as strong considering they don’t have Number 86, Firewall Dragon, Topologic Gumblar Dragon, and other cards. At the same time, it’ll allow for some cool plays in many different decks like HEROs. 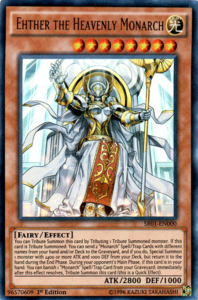 Another card that moved to two last list and is now moving to three, Ehther the Heavenly Monarch gives the Monarch deck a lot more power now that they have their best Monarch that isn’t Erebus back to three. Monarchs won’t really be as powerful as they were years ago, mostly since Pantheism is still at one. Ehther does give the deck a lot more power and makes Ehther into Ehther more consistent alongside the Ehther/Stormforth play that the deck loved to make. Now we just await Pantheism to return to three so we can finally have this deck at full power once again. 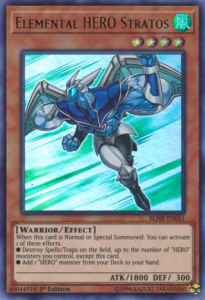 For the first time since the first few months of the card’s release, we can once again play with three Stratos in the TCG. We’ve come a long way from begging Konami to bring this card back from the Forbidden section and now we have it at full power once again. Stratos at three gives the deck more searching capabilities once again as well as another way to remove Spells and Traps, which is great for a deck that likes to OTK like HEROs. It’ll help with the new Evil HERO support that we got recently and the fact we’ll likely be getting more HERO support in 2020 and beyond. Stratos is finally back to three and that’ll make HEROs a ton of fun. 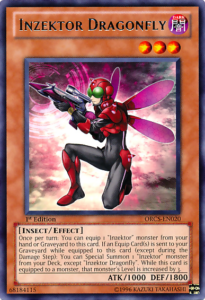 A card that has been long overdue for this honor, Dragonfly now being back at three basically puts the Inzektor deck at full power for the first time since 2013. The deck is also slightly better arguably since it can spam out a good amount of Link Monsters with relative ease, mostly in part due to Dragonfly being able to summon any other Inzektor from the deck when something like Hornet or Ladybug is detached from it as an Equip. Inzektors can now have the power they once had half a decade ago and it feels like a welcome addition to have back. 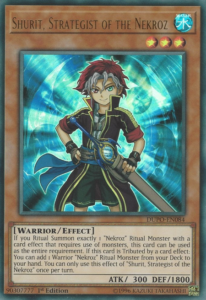 With Shurit back to three, all the deck now needs is for Nekroz of Unicore to go back from one to three in order for us to once again have full power Nekroz in the format, only better now with Impcantations. Shurit will add a lot more consistency to the Nekroz strategy since it being used as a Ritual Tribute will allow it to search for some of the best Nekroz Rituals in Brionac, Trishula, and Clausolas. It also makes summoning Trishula easier since it was always used as the entire sacrifice for any Nekroz Ritual Summon, which was mainly for Trishula. Shurit is going to make Nekroz a lot more consistent and it’ll be nice to see, especially as we wait to see if Unicore gets the same treatment as Shurit and Brionac did. 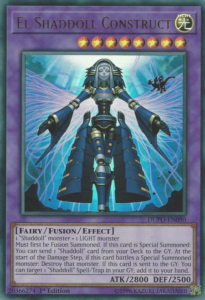 Something that should of probably happened sooner, we now have three El Shaddoll Construct to officially put Shaddoll back at full power. Construct has always been great to dump a Shaddoll to the graveyard for an effect while being able to easily out Extra Deck Monsters and getting the effects of the Shaddoll and LIGHT monster you sent to the graveyard to summon it off. Construct will make Shaddolls in LIGHT based decks look more promising, though it is arguable that El Shaddoll Winda is now the best Shaddoll. Overall, Shaddolls aren’t really as strong as a standalone deck anymore, even with three Construct. The deck is going to fit better as an engine splashed into other decks and LIGHT decks will love the two extra Constructs. The Structure Deck we are expecting for Shaddolls should at least help to potentially bring Shaddolls back as a pure deck and especially boost it as an engine. 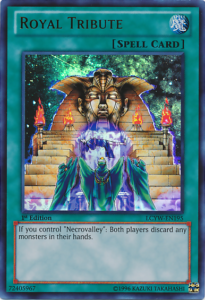 On paper, one of the most powerful cards to come off the list, the only thing was that it relied on a very specific card. Royal Tribute is a great Spell to boost Gravekeeper’s decks, though it still stings for them to have less options to access Necrovalley in the main deck with Terraforming and Metaverse still being limited, but at least they’ll likely always have three Gravekeeper’s Commandant and they also got Gravekeeper’s Supernaturalist to search for Necrovalley if they really needed to. Royal Tribute now at three makes Gravekeeper’s more scary to play against and makes seeing Necrovalley even more terrifying of a card since that’s the lone card that lets you use Royal Tribute. I doubt it’ll make Gravekeeper’s meta, but it’s a great addition to have back to three. 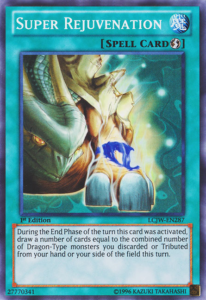 The lone card to get unbanned and it’s striking to see it come all the way back to three without an errata. Super Rejuvenation should not be the problem it once was when all the Dragon Rulers were legal considering the only one we can play with now is a lone copy of Tempest and the baby Dragon Rulers. The best deck to probably end up abusing this is the new Dragonmaid archetype coming up in Mystic Fighters, and since this card was in the OCG version of the set and is now unbanned in the TCG, I imagine it’ll be in our version of the set as well. I can also imagine players playing the old Super Rejuvenation Exodia strategy to try to get an FTK, but it probably won’t make the biggest splash in the world. There’s no real scary way to abuse this card, even though Super Rejuvenation into Super Rejuvenation is still a terrifying sight to see, it’ll be welcome back to three until we find other ways to abuse it once again… or if for some reason all the Dragon Rulers return.

This list helped hit some of the biggest threats in the format in Orcust and Dragons by taking away some big cards from them in Mermaid and Agarpain as well. Sky Striker is also nerfed somewhat with only one Widow Anchor, but it should still be viable. Dragons and Orcust are viable as well still, though Dragons aren’t as strong without Agarpain summoning a strong Extra Deck Dragon and now you can’t just throw Orcust into every deck and have success with it. The list mostly cleaned up some cards that didn’t need to be there anymore. All the unlimits are perfectly fine and the semi-limitation to Dark Armed Dragon will likely prove to not be a problem and we’ll see it at three soon. Still though, no Saryuja Skull Dread hit, but I guess I can give them a pass since it was in Duel Devastator. No Thunder Dragons hit either, but I guess that helps the Mega Tins sell better. The next list will be no sooner than January 13th, 2020 which means this is the list we’re stuck with for the rest of the year unless we need an emergency list.