When a Spell/Trap Card, or monster effect, is activated that includes an effect that Special Summons a monster(s): Return to the Extra Deck, 1 face-up Fusion Monster you control, or 2 Fusion Monsters in your GY, that mention “Fallen of Albaz” as material, and if you do, negate the activation, and if you do that, destroy that card. You can banish this card from your GY, then target 1 “Branded” Spell/Trap in your GY, except “Branded Retribution”; add it to your hand. You can only use 1 “Branded Retribution” effect per turn, and only once that turn.

Branded Retribution is the archetype Counter Trap all archetypes typically have.

Counter Trap that acts like a LP free version of Solemn Judgment, but its cost ties into the archetype. In this case, you need to bounce a Fusion Monster of yours or two Fusion Monsters from your grave to do your negating. The second option is preferable, and with how the deck summons from the Extra Deck does give you more of a shot at cycling back two vs bouncing one. This Counter Trap also works as a smaller Pot of Avarice without the draw, which would be a downside, but Retribution does negate and destroy.

Banish to get a Branded Spell/Trap from the grave to your hand is on par with how the Spell/Trap work in the Branded archetype, and makes your Counter Trap a good 1-for-1 even if it is destroyed before you can activate it. You could even discard it for cost and then banish to get something you just used that turn and use it again. Archetype Counter Traps that do this kind of negating don’t typically have second effects like this, and this one works great with keeping one copy Fusion Monsters accessible.

Every archetype seems to get a Counter Trap, so Branded was eventually due one and now we got it with Branded Retribution.

Branded Retribution is a Counter Trap that can be activated when a Spell/Trap Card or monster effect is activated that would Special Summon a monster(s), letting you return to the Extra Deck either 1 face-up Fusion Monster you control or 2 Fusion Monsters in your graveyard that mention Fallen of Albaz to negate the activation and destroy the card. It’s a bit specific, but you could probably rely on the opponent using effects to Special Summon monsters, so this isn’t that bad. Having the versatility to use the field or the graveyard for returning the monsters is nice to have for options, and I’d say it’s fair for you to have to shuffle more back from the graveyard since that’s more free than using the field. It’s easy to get those monsters in grave at least. Second effect lets you banish this from the grave to target a Branded Spell/Trap that’s not another Retribution in the graveyard and add it to your hand, which is nice recovery for your Counter Trap to have after its been used. Can only use 1 effect a turn and only once that turn, since being able to negate and recover on the same turn does seem a little good. Either way it’s another fine card for the Branded archetype. Another 1-of I’d say, you shouldn’t really have issue searching this when you need it, and maybe not going to show up in as many builds as Branded Lost, but I do like this card still.

Art: 5/5 Gonna instantly like anything with The Iris Swordsouul in it, her artwork alone is already great.

Sticking with Branded but shifting to Counter Trap (the best type of Trap) here’s Branded Retribution.  This has a lot of text, but by returning a Fusion Monster from your Field, or two Fusions from your Grave back to the Extra Deck that mention FoA as Material allows you to negate the activation of a Magic/Trap or Monster Effect that includes Special Summoning a Monster(s) and destroy said card if you’re successful.  The win there for sure is recycling the Monsters from your Graveyard back to the Extra Deck, but it’s handy to have the Field option at your disposal as well.  Removing this card from play lets you add a Branded Magic/Trap from your Grave back to your Hand, which is also really useful, and note that Effect does Target.  You can only use one Effect per Turn, AND only Once per Turn, which I totally agree with (note I usually don’t).  The negation and recycling of Monsters is a tremendous boon to the player, as is netting back whatever you have in your Grave at the time Magic/Trap wise.

Art:  4.5/5  Also very busy like yesterday, but easier to make out, and a lot more cool things going on here.

I wish some weaker archetypes got counter traps instead of demonstrably powerful ones, but that’s life! Branded Retribution is a counter trap, and can be searched by all manner of Branded card searchers. Branded Retribution’s effects are a hard once per turn, one per turn, so keep that in mind if you’re running multiple copies and trying to set up both of the effects at once. Branded Retribution’s first effect activates in response to a spell, trap, or monster effect that includes an effect that would special summon a monster; by returning a fusion monster OR two fusion monsters that use Fallen of Albaz as a fusion material to the extra deck, you can negate the activation and destroy that card. Naturally, this makes for some strong disruption, and using it at the right time will put a monkey wrench into your opponent’s combos. While returning one of your on-field fusion monsters is a rather steep cost, recycling Albaz fusions from the graveyard is excellent, though even with the help of their new boss that dumps Albaz fusions, filling your graveyard is not as easy as it seems. Branded Retribution’s other effect is simpler, allowing you to banish it from your graveyard to add a Branded spell or trap back to your hand from your graveyard. Recycling is nice, though it’s more of a bonus to the first effect; I don’t think it’s worth running Foolish Burial Goods to use this card as an extender. Unfortunately, once again, Branded Retribution competes with much better cards. If you search it, you’re missing out on a chance to search Branded in Red or Branded Fusion, and if you rely on Lady Luck, you run the risk of drawing the card when you don’t need it or can’t activate it. Overall, while it does have a strong effect, I don’t feel that it’s versatile enough to warrant being searched or used over stronger Branded cards.

Art: 4.25/5 Maximus sure is getting a butt-whooping, but unfortunately, the story’s not over yet.

Today’s card is a Counter Trap, perhaps the most rare of all card types. As with most Counter Traps, this card negates something. Retribution negates the effect of a card that Special Summons a monster(s). So although this isn’t an omni-negate, it’s almost as good. Think about all the different kind sof effects that special summon – Monster Reborn, Red MD (whom we’ll check out tomorrow), Fusion / Poly Spells, Nibiru, Gamma, in-archetype cards. This list goes on and on.

The tough part about this card is being able to meet its activation requirements. You have to give up either 1 Fusion monster you control or 2 from your GY and these Fusion monsters must be ones that mention Albaz. Obviously, this usually isn’t an issue in an Albaz deck. The cards you give up to activate this card go back to the Extra Deck which is good for recycling them for later, so it’s actually not that hefty of a cost.

As with most modern Spells and Traps, this card also comes with an additional “remove from grave” effect. By banishing Retribution, you can add back a different “Branded” Spell or Trap from Grave to Hand. This is nice for reusing power cards like Branded Fusion or Branded in Red. But at the very least, it gives you an additional resource to discard for cards like Lubellion or Twin Twisters.

Being searchable, this card is pretty great in the Albaz deck, but it’s not quite good enough to run 3 copies of. Run the one copy and get it on your opening board to put the hurt on your opponent.

Today we are reviewing Branded Retribution, a Counter Trap from the Albaz Strike precon that fits into the Branded/Albaz theme, but interestingly, doesn’t see much play as of yet.

Counter traps are the fastest effects in the game, and can only be responded to on the chain by other counter traps, so this is an immediate bonus this card has going for it. In typical fashion, most counter traps negate effects and this is no exception.

When a spell/trap or monster effect is activated that includes special summoning one or more monsters, you have to return one face-up fusion monster you control or two fusion monsters in your graveyard that mention Fallen of Albaz as a material to the extra deck as a cost – and then you get to negate and destroy the card that would special summon something. These are some steep costs, I’m not going to lie.

But there is more! As a lot of trap cards that are too slow to be pure reactive cards, Branded Retribution can also be banished from your graveyard for an additional effect. In this case, you can target another “Branded” spell or trap in your graveyard and return it to your hand. Keep in mind the effect where you banish from the grave is spell speed 1, since it has nothing to do with the counter-trap nature of the card, but you wouldn’t use that effect on the same turn you activated Branded Retribution anyway, since both effects are once per turn.

All in all, this is a lot to ask for a Branded Fusion player. The second effect is certainly nice, but the combination of this being a trap (currently the weakest type of card in the game, probably, since they inherently need at least one turn to be activated and are completely vulnerable right after being set face-down) and it needing to return either one fusion monster from your field or two from your graveyard to function kind of puts me off, and most Branded Despia players as well, probably. Make no mistake, both effects are powerful and if the Branded Engine had some sort of Graceful Charity-like in-archetype filtering Spell, you could probably abuse the second effect and occasionally get some use out of the actual trap card as disruption, but the decks playing the various Branded/Albaz flavors of fusion summoning are actually not even that afraid of special summoned monsters, they usually just Super Polymerization those away.

Anyway, long story short, this trap has potential and the second effect is alright, but it’s probably a tad too expensive and slow to see widespread play.

spell speed 3 is the fastest in the game, can be completely free if used by returning fusion monsters from the graveyard, can disrupt opponent’s plays, offers some additional value after initial use

conditional, slow and vulnerable to backrow removal, very costly and does nothing unless you manage to set up a fusion board first or have the game go pretty long already

This is a great action shot, Dramaturge of Despia had it coming! But wait, they fight each other? And who is the other monster? Kinda funny how Yugioh gameplay is so scripted, yet they make the story be in conflict with the card mechanics. 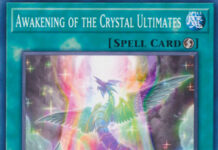 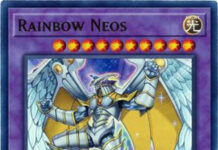