I am in my mid-50’s and I’m still an avid gamer. And, I have to say that Borderlands 2 was one of my favorite video games of all time.  I loved the storyline.  I loved the writing.  I loved the artwork.  And I loved the gameplay.  I played all the usable characters through the main storyline at least once.  My favorite character to play was the Gunzerker: Salvador!  I relished in enabling that Dual Wielding Action Skill and wreaking havoc!

For the uninitiated, Borderlands is set in a very bizarre-ass universe. It’s a First Person Shooter / Role Playing Game.  Your characters are Vault Hunters that are trying to discover the riches in the storied Vault on the planet Pandora.  You are trying to get to the vault before the evildoers.  The villains in the series remind me of the crazies in the Mad Max movies.  They are stylized, over-the-top crackpots that usually have hilarious dialogues and crazy attacks.  The game forgoes realistic looking imagery for more of a comic book type atmosphere.

One of the main draws of Borderlands games are the guns.  You usually start the game with a single pistol.  But you keep finding more and more and more and more guns along the way.  And you are continuously upgrading your guns as you go.  Villains drop guns.  Bosses drop guns.  Quest Rewards are guns.  There are even gun vending machines.  The first Borderlands game is in Guinness Book of World Records for having over 17 million different possible guns that could be generated!  The guns will shoot: bullets, flame bullets, corrosive bullets, shock bullets, etc.  You will get to fire pistols, sniper rifles, machine guns, SMG’s, shot guns, grenade launchers, etc.  You find the weapon of your choice, and go to town.

The Borderlands Series now consists of 5 video games.  Four of the games are first-person shooters.  And one of the games is a fantastic Telltale Adventure – which is essentially an interactive comic book (Tales from the Borderlands).

A nice thing about the Borderlands games is that they are great for both Solo and/or Cooperative play with up to 3 friends (4 players).  The Borderlands series also offers a cool “drop in / drop out co-op” where you can join in with your friends, and leave at any time. 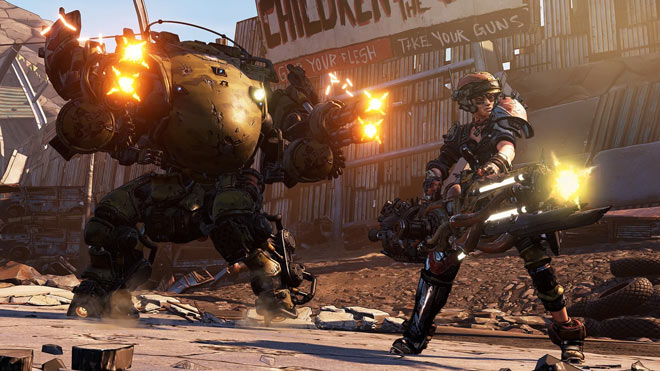 There are currently 4 Vault Hunters in Borderlands 3.  I’ve played 3 of the 4 characters in the game so far.  You can start the game with either:

Each character has 3 Skill Trees that allow you to further spec out your character to suit your playstyle.

The Borderlands 3 story takes place 7 years after the events of Borderlands 2.  It has been discovered that there are more vaults on other planets.  Two new, powerful villains have risen to power – Twin Siblings Troy and Tyreen Calypso.  They have formed a cult called the Children of the Vault, and have brought the crazy bandit factions together to find the Great Vault.  They are essentially Pandora YouTubers who have rounded up the scum on Pandora.

I have been playing this game solo, and co-op with friends and family.  I was talking to one of my son-in-laws, who played and loved the previous versions of Borderlands, and asked him if he was getting Borderlands 3.  He responded with a “No” because he heard the early reviews were not that good.

This got me to thinking that I should write a review.  I had pre-ordered this game as I  had played all 4 of the previous installments of Borderlands, and loved them.  I assumed I was going get more of the same in Borderlands 3 – Guns, Fun Storylines, Great Villains, Good Graphics, and fantastic Gameplay.

Then I started reading some of the early reviews.  Some people said the graphics were really choppy.  And some people said the main villains sucked.  Well, I had pre-ordered the game already, so I was stuck with it.  But you know what?! The game is frickin’ fun to me!  I have a PS4 Pro, and the game is running fairly smoothly.  It could be better, but it’s certainly not unplayable.  I’m sure patches will keep coming out to smooth things out.

And I don’t think the main villains are all that bad.  The first time you run into the Calypso’s, they beat the shit out of Lilith – and Tyreen steals Liliths Siren powers.  They are annoying as fingernails on a chalkboard, and you can’t wait to silence them!  They aren’t as funny as Handsome Jack from Borderlands 2, but that would be hard to top.

Most the dialogue and writing is still hilarious to me.  There are dozens of NPC’s with fantastic side quests, that are both fun & funny.

The new playable characters are different than before, and have new skill trees.  It’s fun and different to run around inside a Bear Mech, or have a skag as your Hunter’s pet.

Cooperative play has been working pretty well for us.  Gameplay has been fairly smooth. I’ve been playing cooperatively with 3 other people.  Occasionally, the Heads Up Display over friendly characters will disappear.  And we’ve had a couple of times where friends characters images have disappeared and you simply see a gun running around.  These are minor bugs that I’m sure will be fixed with patches.  The game has never glitched out or crashed while we’ve been playing.

This time around, Borderlands has upped the types of vehicles the you can drive.  You may find cool vehicles being used by the enemies, and Ellie will ask you to hijack them so she can use the tech in future vehicles for you.

If you haven’t played any Borderlands games, I highly recommend picking up: Borderlands 2 – The Handsome Collection.  That’s a great place to jump in to the series.  And Borderlands 2 has been tweaked to 4K UHD Textures via patches, and looks gorgeous!

If you have been on the fence about picking up Borderlands 3, and you enjoyed the previous installments, then I suggest getting off the fence and picking up a copy Borderlands 3.  The joy you had in defeating Handsome Jack can still be found right here while taking on the Calypso Twins.

As of this writing: 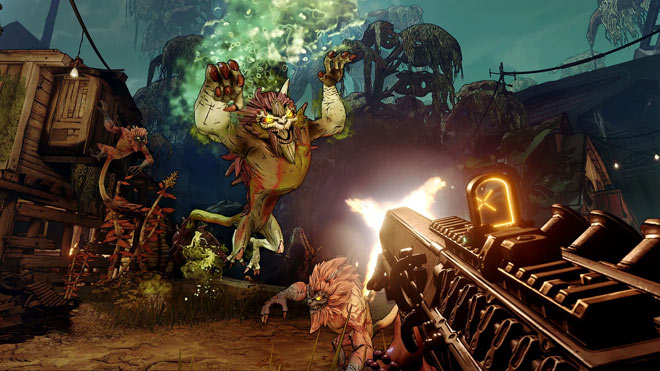