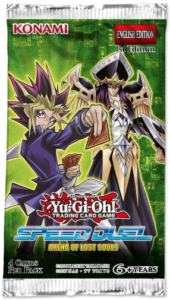 The three musketeers of face have arrived to Speed Dueling. Hello Pojo Readers, Crunch$G here to talk about the first ever main set for the Speed Dueling format, Arena of Lost Souls. The purpose of these Speed Dueling sets are obviously to add new cards to the legal Speed Dueling lineup for tournament play, as remember a card has to have the Speed Duel stamp to be used in official Speed Duels. This set has the main focus on Bonz’s zombies and Yugi’s Three Musketeers of Face cards, with Skills to go with them, and Ishizu getting herself a new Skill as well. However, there’s a ton of other cards in here to help various decks, some good generic cards for many Speed Dueling decks, and some cards to set the way for other deck types to be ready in the future. With that out of the way, the way these articles will work is that I’ll talk about all the new Skills (which are all Super Rare or Ultra Rare, which I’m sure you could tell with the name’s foiling or lack-of), then discuss the Commons, Super Rares, and finally Ultra Rares and see how they would do in this environment, so without further ado, let’s get started. 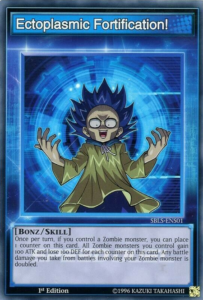 The first of three Bonz Skills is here to help Zombie decks, as Ectoplasmic Fortification is flipped over when you activate this Skill, which once per turn if you control a Zombie monster, you can place a counter on this card and all Zombies you control gain 100 ATK and lose 100 DEF for each counter on this Skill, but the downside is this skill doubles any battle damage you would take from battles involving your Zombie monsters. It’s a cute boost for Zombie based decks to have, as these counters will add up over time in a duel as a 100 ATK boost slowly becomes 300 and later 500 and you notice how much it starts to matter. The downside of the Defense shouldn’t matter too much as if you’re putting a monster in Defense Mode, you know it’s likely going to die anyways, but it will matter if there is piercing because of that double battle damage clause, which stops mattering if your Zombies are strong enough but will still hurt if you are attacked with a much bigger monster, especially one with piercing even though I don’t believe there are many right now in Speed Dueling. This is a cute Skill for Zombie decks to use, I believe it can find a niche.

Straight to the Grave 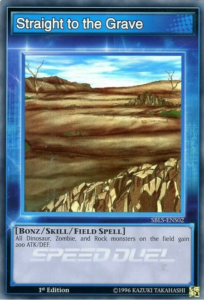 One of the only Skills in this set taken from Duel Links, Straight to the Grave is the second Bonz Skill and basically acts as the Wasteland Field Spell as at the start of the duel, this Skill goes to your Field Spell Zone and is activated as a Field Spell that boosts all Dinosaur, Zombie, and Rock monsters by 200 ATK and DEF. For Zombies, I believe the previous Skill might end up being better since it can’t be destroyed as it isn’t acting as a Field Spell and instead just a Skill, and there’s no way to destroy normal Skills… at least not yet. For Dinosaurs this is a nice boost for them, especially when they add stronger Dinosaurs to this format like Sabersaurus, Megalosmasher X, Evilswarm Salamandra, Black Brachios, maybe eventually Giant Rex. Eventually I imagine we’ll get a Skill for Dinosaurs that acts as Jurassic World so Dinosaurs can instead get a 300 ATK/DEF boost, but for now this will work for Dinosaurs. Rocks might benefit the best though, especially depending on what Rocks they add to this format, like maybe the Magnet Warriors or the Rock Koa’ki Meiru monsters. Rocks, unlike Dinosaurs, don’t have a superior boost than this and if you can’t find a good generic Skill that really helps your deck and your monsters aren’t too powerful in stats, then this can help you out some.

Call of the Haunted 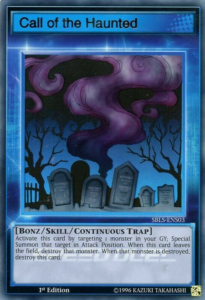 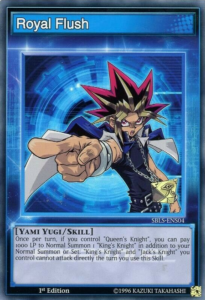 Now we get to Yugi’s Skill to help the Three Musketeers of Face cards. Royal Flush is a Skill that is flipped over when you activate it, where once per turn if you control Queen’s Knight then you can pay 1000 life points to Normal Summon a King’s Knight in addition to your Normal Summon or set, but King’s Knight and Jack’s Knight cannot attack directly that turn. The main reason for this Skill is probably for board presence or to maybe summon Arcana Knight Joker with greater ease and they didn’t want OTKs to be so easy so early on in Speed Dueling’s lifespan, which is why the restriction on King’s Knight and Jack’s Knight attacking is there. It’s clear they thought this one out to make sure it isn’t too overpowered, but it still requires you to have King’s Knight and Queen’s Knight in the same hand at the same time, which is probably easier with 20-30 card decks. It’s basically a fun Skill I feel, I don’t think it’ll make the Three Musketeers of Face meta in this format.

Tomb of the Pharaoh 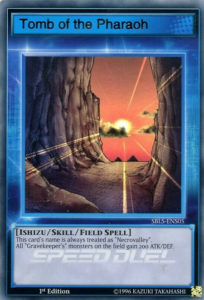 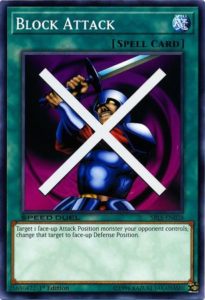 Now I don’t think it has to be said that most of these Normal Monsters are probably just pack filler, though I’m sure Dragon Zombie might be the best vanilla in this set with the Straight to the Grave or Ectoplasmic Fortification Skills. Buster Blader will be useful when/if the Speed Dueling format gets the Buster Blader support. Possessed Dark Soul might find a niche against Level 3 heavy decks, though there’ll probably be better outs later on. Magicians Unite might help Spellcaster decks get over stronger monsters early on in this format. Shield & Sword could be cute to play against decks with monsters that have low Defense, though you’d have to use it before you summon your monsters maybe unless they have better Defense. Common Charity might be the best draw power in this format that isn’t generic, though that won’t be hard to top. Amazoness Spy gives the deck a way to gain field presence. Gravekeeper’s Ambusher might be good in Gravekeeper’s decks if not just for the body it provides on board. Conscription is a good Trap to help you get field presence early in this format’s life as well. Skull Servant has a card in here that makes a Skull Servant deck considerable, though it’ll need more support to be worth considering. Violet Crystal can be useful in Zombie decks early on to give them more ATK power. De-Spell is a good Spell removal option early on, though it’ll easily be powercrept. Block Attack will probably be decent early on for getting over stronger monsters. The Shallow Grave can find a niche maybe. White Elephant’s Gift could be decent draw power if you know you can keep field presence after using it. Wicked-Breaking Flamberge – Baou might the best generic Equip Spell that Speed Duels will have for a while. Half Shut might be one of the best commons in this set, behind Block Attack probably, to protect your monster or help you deal some damage.

Super Rares in Arena of Lost Souls: King’s Knight, Meteor B. Dragon, Sword of Dragon’s Soul, Senju of the Thousand Hands, and King of the Skull Servants 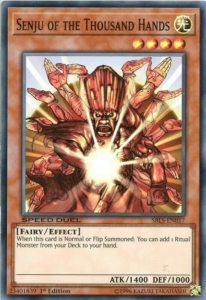 The Super Rares in this set are solid, and that does include the Skills. King’s Knight is only good with the Queen’s and Jack’s Knight, and I don’t think that will be too meta breaking in Speed Dueling. Meteor B. Dragon is a nice, powerful Fusion for the format since it only needs 2 materials and that 3500 ATK stats is great to have and this might be the best option for Joey’s Pal-O’Mine-Zation Skill from the Starter Decks. Sword of Dragon’s Soul is a great Equip Spell for Warrior Decks as that 700 ATK boost is great to have and it being able to counter Dragons could be a good niche to have, especially with how good Dragons can be in this format. Senju of the Thousand Hands is amazing for this format to have so early as Rituals could use all they can get this early on and it could help make Relinquished Decks more viable until Sonic Bird hopefully comes soon to Speed Dueling. King of the Skull Servants will go well with Skull Servant and other copies of itself, but I do think we need the other Skull Servant cards to make this worthwhile. 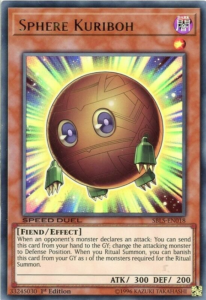 I feel like the Ultra Rares are mostly going to be the stars of the show in all these Speed Dueling sets, which I’d hope they are considering they should be the hardest cards to get. Arcana Knight Joker and Blue-Eyes Ultimate Dragon were always going to be Ultra Rare in one of these sets, no matter how viable they are or aren’t, due to how iconic they are. Arcana Knight Joker is a little more viable with the Royal Flush Skill, but that’ll be a fun deck. Summoning Blue-Eyes Ultimate Dragon does seem almost game winning in this format, but the requirements are high to pay still considering even with the Pal-O’Mine-Zation Skill, you still need to have two Blue-Eyes White Dragons. Sphere Kuriboh probably has the highest shelf life in this set, the card is great in this format for keeping tempo for protecting your monsters from destruction in battle, saving your life points, and making an opponent’s monster more prone to being destroyed in battle, not to mention it can help benefit a Ritual Deck like a Relinquished-themed deck since it can be banished from the grave for material for a Ritual Summon. Desert Twister might be good in Speed Dueling later on as a cute boss monster, we just need better EARTH and WIND monsters in this format and I don’t think there are that many yet. I’m sure Amazoness/Harpie hybrids can make one work, but I’m expecting this to work with Last Gamble decks eventually. Twister is a card that will be good early on for Spell/Trap removal, but is very prone to powercreep, especially with Dust Tornado in the next Speed Dueling set. Michizure will probably be great early on as well in this format as it can help get revenge for one of your monsters being destroyed and even the playing fields by destroying an opponent’s monster, it’s a good tempo card in this format, but I imagine we’ll have better options later on.

This is a good start with these sets. You are setting the table for the future, but not getting things off to an overpowered start. Things seem a little balanced compared to how they could be. Some cards in here will be cute for some themed decks though not the top deck in this format, some cards are very weak to powercreep, and some cards will stand the test of time in this format for a while. It’s a good, slow start to this format before things eventually speed up.