I had an opportunity to play the Arcadia Quest Board Game recently, and I really enjoyed it.  I thought I would share some of my thoughts from play-testing this fun Dungeon Crawler.

Arcadia Quest is made by CMON games, and designed by Eric Lang.  Mr. Lang is the brainchild behind dozens of popular games including Blood Rage, Dice Masters, Star Wars TCG, The Godfather, and Warhammer. Arcadia Quest originally came out in 2014 and was funded by a Kickstarter campaign.  The game is an adventure style board game that combines elements of PVE and PVP.

Aradia Quest is played on modular game board tiles that are assembled differently before each scenario.  Miniature enemies are then placed on the board that each player has to contend with during the scenarios.  Various treasures are also hidden on the board.

Arcadia Quest is played with 2 to 4 players.  Each player will draft a Guild of 3 Heroes from the 12 different Hero Miniatures available and guide them through an Arcadia Quest campaign made up of multiple, different scenarios.  Each Hero also has a unique Special Ability.   Arcadia Quest is similar to a World of Warcraft dungeon raid, with Heroes working together as a team, except that you’re not the only Guild down in the dungeon.

About How Arcadia Quest is played:

This is very basic overview on how a scenario in Arcadia Quest is played.

As noted above, each player will draft 3 heroes to form their Guild.  They will place their Heroes together in their starting area. Your Heroes will all start with some beginner weapons.

On your turn, you will activate one of your 3 Heroes.  Your Hero can then:

You can decide to attack another nearby player, a nearby monster, or try to move towards some loot in the dungeon. If one of your Heroes dies, he/she can be resurrected at any time by resting (skipping your turn).

Gameplay is fairly simple.  Players will roll dice and use their Heroes’ Special Abilities and weapons to determine damage during their turns.

Aradia Quest comes with a Campaign Book.  There are 11 different Scenarios in the Campaign Book.  Six scenarios played successively make a campaign.  The scenarios range from Easy to Medium to Hard. After your first campaign you will have earned gold by killing monsters, killing other players’ Heroes, and by completing Scenario goals.

At the end of the first Scenario, you will use the gold you have earned to purchase newer and stronger weapons.  These stronger weapons will allow you take on the stronger monsters in the 2nd scenario.  This process is rinsed and repeated until you have played through a campaign of 6 Scenarios.  In the 6th Scenario, you will all face off against the evil Vampire Lord who’s controlling the lost city of Arcadia. 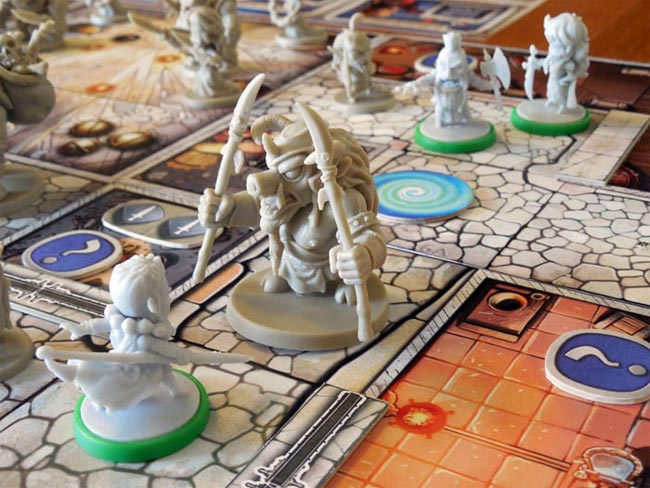 I thoroughly enjoy this game.  The theme is fun, and the PVP battles are great.  Arcadia Quest is combative and competitive, but it never seems to make anyone mad if you decide to attack them.  If someone attacks you, you just grab your defence dice and yell “Come at me Bro!”

I like that there are additional Heroes you can add to the game to spice things up.  Sprinkling in a few more heroes to the initial draft gives everyone more choices so they can build a team they really want to play with.

To me, the sign of a good game is that I’ve enjoyed myself even when I’ve lost.  And I do enjoy this game … even while losing.  😉

Click here to read some of our other Board Game reviews. 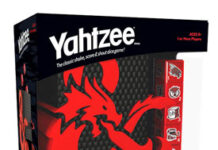