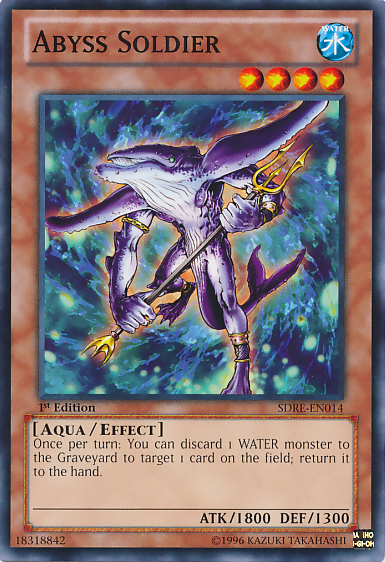 Originally, this card was mostly only used in aggressive Zoo/Warrior/Aggro decks.  But now, some Goat Control decks are using it.  Why would people use this with only Sinister Serpent as the target?  Because Sinister Serpent is the only discard fodder you need and you wouldn’t want to be discarding monsters that don’t make Abyss Soldier’s effect essentially free.

At its worst, it’s still a good card.  1800 ATK runs over most card in Goat Format, and 1300 DEF resists Tsukuyomi.  There aren’t a lot of LV4 monsters in the format with those stats alongside a useful effect.

At it’s best, the return to hand effect offers so much utility:
* It allows the player to maintain a Summon Advantage and basically un-do the opponent’s Normal Summon each turn.
* It prevent Flip Effects from happening.  While it doesn’t exactly negate them, bouncing them to hand robs the opponent of the advantage their deck is supposed to provide for them.
* Against set Spells/Traps, it often forces the activation of chainable cards, and makes battle traps like Mirror Force in-effective.
* It returns the opponent’s Thousand-Eyes Restrict to the Extra Deck
* It’s viable against a variety of different matchups.  It can fight for field presence against Zoo and can interact against the spells/traps of stall decks, whereas most cards don’t.

Some players swapped out their 2nd Airknight Parshath for a copy of Abyss Soldier.  This is a subjective choice with pros and cons, of course, but it does result in a superior early game.  While Airknight bricks the opening hand without a reliable way to summon it, Abyss Soldier is a viable strong turn 1 play.  Even if it doesn’t use its effect when its summoned, it can always stay in the Graveyard and be a great target for Premature Burial to lead an offensive push for game.  Of course, it being a WATER monster does sacrifice in a deck’s LIGHT/DARK economy, but having 1 Airknight and 1 Abyss in the deck means that the deck has more late-game possibilities, being able to revive whichever is better for the situation.