The official Top #25 countdown will begin on Thursday December 7th, as we’re going to close out the last 25 days of 2017 with the Top 25 cards.  We’re kicking things off early with a few honorable mentions. 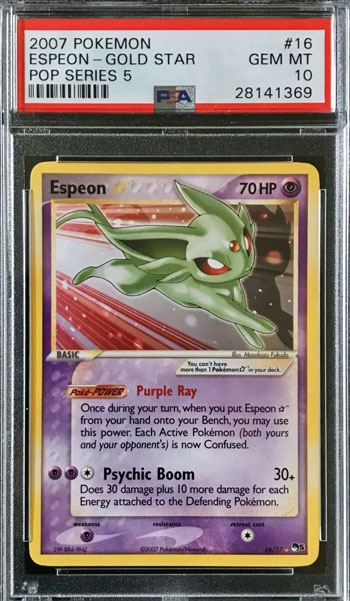 POP Series cards were rewards from Pokemon Organized Play.  As a reward for playing in Pokemon Leagues, players were occasionally given 2 card booster packs.  Each POP Series went with a different season of the Pokemon League.  Umbreon Gold Star is a rare pull from Pop Series 5.

Some quick notes on our rankings:  These are all cards you could have reasonably collected. These are all cards that were available in the United States.  These are cards that appeared in Booster Boxes, Booster packs, Leagues, and/or Starter Sets. Typical Pokémon fans could have plausibly obtained these cards through auctions, trades and/or blind luck pulls.  There are no cards in our list that were given out as prizes for winning contests.  All values are based on actual sales of Pokemon Cards on eBay during the 4th quarter of 2017. Our Prices are based on Professionally-Graded, Gem Mint cards, which are independently certified of their condition. Here’s an article on Graded Pokemon Cards if you don’t know what Graded Cards are.