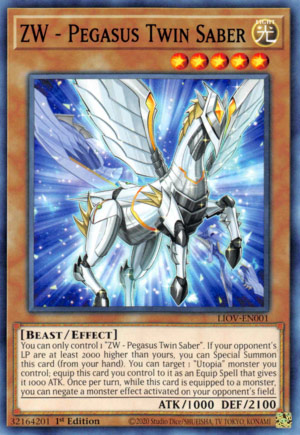 You can only control 1 “ZW – Pegasus Twin Saber”. If your opponent’s LP are at least 2000 higher than yours, you can Special Summon this card (from your hand). You can target 1 “Utopia” monster you control; equip this card you control to it as an Equip Spell that gives it 1000 ATK. Once per turn, while this card is equipped to a monster, you can negate a monster effect activated on your opponent’s field.

A Utopia week we’ve got in store for you with the new Utopia support being released. We’re starting this week off with ZW – Pegasus Twin Saber.

Level 5 is never a good start for a monster with 1000ATK, but like many, Twin Saber can Special Summon itself. Since LP don’t matter too much, being down 2000LP to Special Summon Twin Saber is doable. Only being able to control one Twin Saber is a good restriction, making it tougher to make a Rank 5. Works like a Union monster for only Utopia monsters, equipping itself and boosting it by 1000ATK. The monster effect negation once per turn is what makes this card something you’d run in a Utopia strategy. Utopia cards, especially the bigger ones, have more than enough ATK to deal with anything on the board, but usually have little to no protection and need materials to attach themselves to them to protect. Even if a monster has inherited protection you still need something to counter your opponents moves and that is where Twin Saber comes in. On it’s own it is a 2100DEF wall or a Rank 5 maker, but paired with Utopia, it can make life difficult for your opponent. There are so many ZW cards to choose from but this one is one of the best ones because not only does it boost your Utopia’s ATK, but it restricts your opponents plays, something ZW – Eagle Claw only did.

Good card to use in the archetype, but you’d rather never be down in LP to your opponent.

Alright, time for the cover theme of Lightning Overdrive, so we get to look at more Utopia support and start the week with the newest Zexal Weapon monster: ZW – Pegasus Twin Saber.

Pegasus Twin Saber is a Level 5 LIGHT Beast with 1000 ATK and 2100 DEF. A very nice DEF stat to make up for low ATK, LIGHT is pretty great, and Beast is alright. You can only control 1 Pegasus Twin Saber, cause they won’t want multiples of these equipped to your Utopias. Anyways, you can Special Summon this from hand if the opponent’s LP are at least 2000 higher than yours, so a free body on board is always nice. Sadly, you have to get this on board to use its own effect to equip to a Utopia and give it a 1000 ATK boost. Now you got ways to equip this via other means at least, just would of been nice to just play this from hand and equip it to the Utopia you want. You want it equipped as well because it has a soft once per turn where you can negate a monster’s effect activated on the opponent’s field while this is equipped to a Utopia. Nice little effect to make this one of the better ZW monsters now. It’s great to add alongside Tornado Bringer and Lightning Blade to get protection on this and the Utopia as well. Either way, negation is something Utopia could use to give it a turn one play and make it not just an OTK Deck. Anyways, Pegasus Twin Saber is a really good ZW monster, and with it being highly searchable and easy to equip from Deck, you can only use one to not worry about bricking because you can only control one.

A Utopia Theme week…Alex’s unhappy face will remain until end of business; Friday.  ZW-Pegasus Twin Saber…You can only control one of these, and while the 1000 attack boost is a sizable one, I’m not sure a 3000 boost, assuming you had all three in Hand and able to drop at once, is enough to warrant that.  Your opponent having 2000 or more Lifepoints than you lets you Special Summon it from your Hand.  Interesting little condition.  That still could benefit you in ways pertaining to your Extra Deck (likely a Utopia play given you’re using this card) but even not.  The ability to negate a Monster Effect (so long as it’s on your opponent’s Field) once a Turn is pretty nice.  I like that it’s optional AND that you’re not locked into doing it at a certain time (a step or stage in the Turn, or say, the FIRST Effect used, etc).  The Light helps a lot, the Beast doesn’t so much, and the 1000/2100 aren’t doing much for you on a Level 5.  This card is doing a few things, just nothing here is particularly…useful.  As said, 1000 attack increase is nice, and it’s permanent.  But you might not get the Special Summon.  And without a Utopia and/or the Lifepoint difference, this is essentially a deadweight Tribute Monster.

Art:  3.5/5  Pretty enough The Pegasus is a bit underwhelming, but the background is cool.