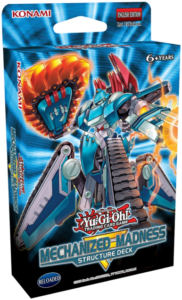 The Machines have risen up, upgraded themselves, and now they will battle each other. Hello Pojo Readers, Crunch$G here to tell you about the latest Yu-Gi-Oh Structure Deck release: Mechanized Madness. This is another retrain of an older Structure Deck from years past and this one focused on retraining the Machina Mayhem Deck that gave us Machina Fortress for the first time. Therefore, you can expect a lot of new Machina support in here to help bring Machinas to the modern day, as well as offer some good reprints that these Machines can use, as well as a few cards that are good for any generic purposes. With all that said, let’s see the upgrades to our Machina Militia.

A Mechanized Militia of Mayhem 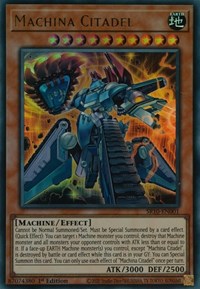 First off is the new Machina support cards, and we have a new boss in Machina Citadel: a Level 10 EARTH Machine that cannot be Normal Summoned or Set and must be Special Summoned with a card effect. Therefore, Citadel does have an effect to Special Summon itself from the graveyard if a face-up EARTH Machine(s) you control that isn’t another Citadel is destroyed. The other effect it has is a Quick Effect to target a Machine you control to destroy that target and then destroy all your opponent’s monsters with ATK less than or equal to the targeted Machine’s. Next up you got 2 Level 8 EARTH Machines with similar effects: Machina Air Raider and Machina Irradiator, both of which can be Special Summoned from the hand by discarding a Machina monster. Air Raider can target a Machine you 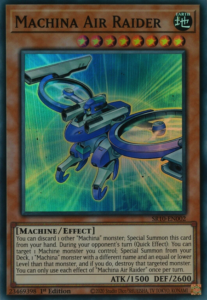 control on the opponent’s turn to Special Summon a Machina with a different name and an equal or lower Level from the targeted monster from the Deck, and then the targeted monster is destroyed. Irradiator targets the monster on your turn, and summons the Machina monster from your graveyard, but it’s the same as Air Raider besides that. Machina Redeployment is a Normal Spell with an effect to either discard a card to add 2 Machina monsters with different names from your Deck to your hand, or it can discard a Machina card specifically to add 2 Machina cards with different names from your Deck to your hand that aren’t Machina Redeployment. Machina Defense Perimeter is a Continuous Spell that prevents your opponent from targeting 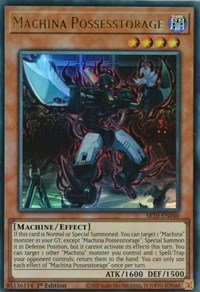 your Level 6 or lower Machines for attacks or effects while you control a Level 7 or higher Machine, and it can add a Machine from your graveyard to your hand if a face-up Machine you control is destroyed by battle or card effect. Machina Overdrive is a Normal Trap that targets a Machine you control to Special Summon a Machina with a different name from the hand or Deck and then destroy the targeted monster. Also it can be banished from the graveyard to target 3 Machines that are banished and/or in your graveyard to shuffle them into the Deck and let you draw a card. Machina Possesstorage is a Level 4 DARK Machine that upon Normal or Special Summon can target a Machina monster in your graveyard that isn’t Possesstorage and Special Summon it in Defense Position, but it cannot activate its effects that turn. Possesstorage can also target another Machina monster you control and a Spell/Trap the opponent controls to return them to the hand. Finally, Unauthorized Reactivation is a Quick-Play Spell that lets you target a Machine you control and equip it with an appropriate Union Monster from the hand or Deck, but the equipped Union cannot be Special Summoned that turn. 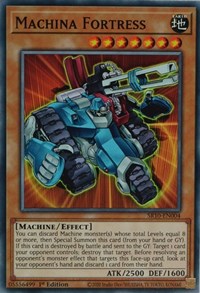 Now it’s time for some Machine goodies. You of course have all of the old Machina cards, with the best cards to have reprinted being Machina Fortress, Machina Gearframe, Machina Megaform, Machina Cannon, and Machina Armored Unit. Jizukiru, the Star Destroying Kaiju gets a needed reprint as it’s one of the better Kaijus. You got Genex Ally Birdman in here for some interesting plays. Scrap Recycler is a much needed reprint and it synergizes with Machinas well. Righty and Lefty Driver can both be useful cards to have, and the same can go for Deskbot 001 and 003. You got some great Machine-based Spells like Iron Call, Iron Draw, Magnet Reverse, and Limiter Removal. Ties of the Brethren getting another reprint in a Structure Deck is really good. Pot of Avarice now becomes the card that’ll be in nearly every Structure Deck now, replacing its Jar counterpart. Cosmic Cyclone is another really good reprint for some backrow removal. Back to the Front is a great reprint to have. Trap Trick gets a second reprint in a month and it’s very welcome. Finally, you got a copy of Solemn Strike, which is always going to be good.

Overall, the Machina support is actually fairly solid. It helps boost Machines a fair bit and is worth trying outside just a pure Machina Deck. Citadel is a pretty solid boss monster to have. We are missing Machina Metalcrunch, and I was hoping it would make the cut in this Structure Deck, but we still have to wait a bit longer (which we now know is in Eternity Code). The reprints are better than you might think at first glance. Scrap Recycler really needed the reprint, and you got cards that don’t hurt to have reprints for like Jizukiru, Ties of the Brethren, Cosmic Cyclone, Trap Trick, and Solemn Strike. It’s a fairly good Structure Deck, especially for those trying out any sort of Machine strategy.