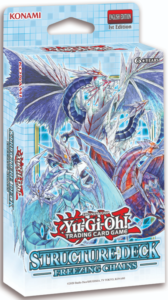 The dragons have awoken from their slumber. Hello Pojo Readers, Crunch$G here to tell you all the information about the new Structure Deck: Freezing Chains. This Structure Deck was the winner of the most recent Structure Deck poll overseas and now it makes its way over to the TCG. This Structure Deck is centered around the old Ice Barrier theme from the Duel Terminal storyline, giving them new cards to modernize the strategy, and honestly try to make the Deck a bit more playable compared to its previous state. We got several new Ice Barrier cards, including the Jump Promo being imported in here probably to make up for the fact Crossout Designator was never going to be imported in a Structure Deck of all things. We even got a new Trishula Synchro and an errata on Dewloren, so let’s go down the list and see what we got.

Disciples of the Frozen Dragons 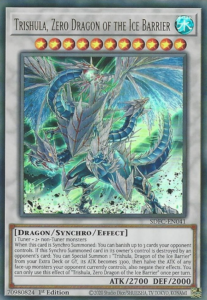 The Structure Deck starts off with nine new cards to update the Ice Barrier strategy. We’ll start off with the new Trishula, Zero Dragon of the Ice Barrier, which is a new Level 11 Synchro of any Tuner and 2+ non-Tuners, can banish up to 3 cards the opponent controls upon being Synchro Summoned, and if it was Synchro Summoned and destroyed by an opponent’s card, you can Special Summon the original Trishula from your Extra Deck or graveyard while making Trish’s ATK become 3300 and negating the effects of all your opponent’s monsters plus halving their ATK. General Wayne of the Ice Barrier is a new Level 5 who banishes all the opponent’s Spells and Traps that would be sent to the graveyard from the field, can be Special Summoned from the 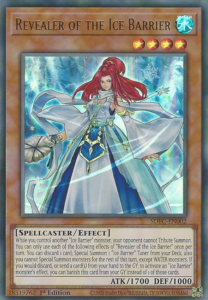 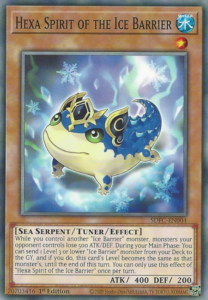 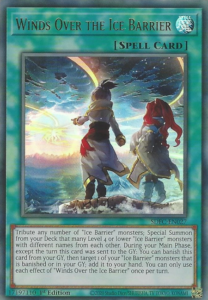 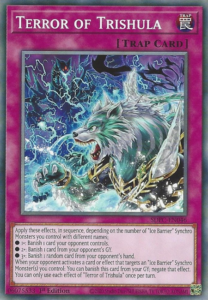 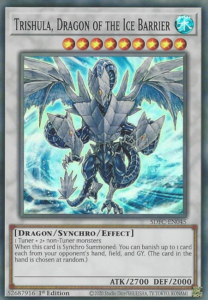 Overall, you kinda get what you expect from this Structure Deck in terms of reprints. You have literally every Ice Barrier card in this Structure Deck, mainly getting the Synchros for the archetype: Trishula, Brionac, Gungnir, and Dewloren. The Dewloren reprint also comes with an errata to make it a hard once per turn so you can no longer do loops with it for FTK combos. Outside the Ice Barrier cards, you have reprints for the Genex package of Undine and Controller, Aqua Spirit, Dupe Frog and Ronintoadin, Fishborg Launcher, Moulinglacia the Elemental Lord, and Silent Angler for some good monster reprints. The Spells and Traps that aren’t the Ice Barrier cards give you Salvage, Surface, Where Arf Thou?, Appointer of the Red Lotus, Fiendish Chain, Eisbahn, Mind Drain, Heavy Storm Duster, and Crackdown.

It’s kinda what you’d hope from a Structure Deck. You got all the new cards for the archetype and every old card in the archetype all in one place, something many Structure Decks don’t give from time to time. The other reprints are fine, but nothing special. We knew Vanity’s Emptiness would get removed since it’s banned in the TCG and Crossout Designator was getting removed so TCG could import it in a set where you have to RNG pull it. The other staples could be better, a card like Eisbahn is kinda questionable, but the others are okay to have, especially Appointer of the Red Lotus and Crackdown. The new cards help give Ice Barriers more swarming, which does help the lockdown effects of the old Ice Barriers and the new cards. It’s weird we get a Spell and Trap searcher and the only Trap the archetype has to its name isn’t an Ice Barrier card, making it unsearchable, but it is what it is. Overall the Structure Deck is cool, that new Trishula is going to be a boss of a new Synchro to have, but I do have higher expectations for the Cyber Style SD being more competitive than Ice Barriers.