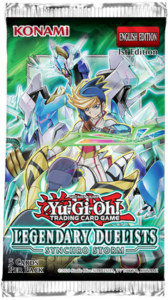 Ready to speed your way to victory? Hello Pojo Readers, Crunch$G here to tell you want you should know about the 8th installment in the Legendary Duelists series: Synchro Storm. Where last Legendary Duelists took more of a focus towards DARK monsters, this time we focus on the WIND Attribute and 3 duelists who used WIND monsters in the anime. We see the return of Yugo’s Speedroids and Lulu’s Lyriluscs from the Arc-V show, and we also finally see Sherry’s Fleur Deck from 5D’s start to become a reality. We got 2 Synchro archetypes and an Xyz archetype, alongside a Ghost Rare in this set. Overall, let’s see how strong this set is. 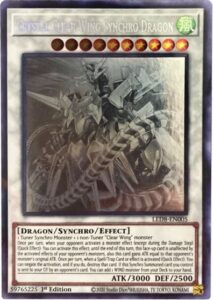 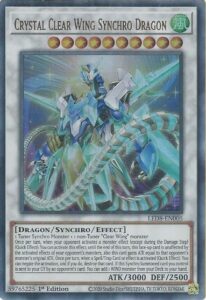 First off we’ll cover the main theme for this Legendary Duelists, the Speedroid archetype and Clear Wing monsters wiht the new support they received. Speedroid Fuki-Modoshi Piper is a Level 4 WIND Machine Tuner who upon Normal/Special Summon lets you excavate the top cards of your Deck equal to the number of other WIND monsters you control and add 1 of the excavated cards to hand while the others go back to the bottom of the Deck, also you can banish this card from the graveyard to target a Level 3 or higher WIND monster and reduce its Level by 2. Speedroid Ultra Hound is a Level 3 WIND Machine who upon Normal Summon can let you send a Speedroid card from the Deck to the graveyard, also during your Main Phase of a turn this card wasn’t sent to the graveyard, you can banish this card from the graveyard to target a Speedroid in your graveyard to shuffle it into the Deck and summon a Speedroid Synchro with the same Level, but different name, from the Extra Deck with its effects negated. Hi-Speedroid Cork Shooter is a Level 3 WIND Machine Synchro Tuner who needs any Tuner and any non-Tuner(s) to summon and upon Synchro Summon can either search for a Speedroid Spell or Trap from the Deck or take all Speedroid monsters used as Synchro Material, if you only used Speedroids to summon this that is and they’re all in the graveyard, and revive them, but you can only summon WIND monsters the turn you use this effect. Crystal 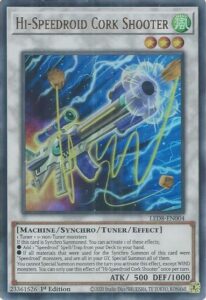 Clear Wing Synchro Dragon is a Level 10 WIND Dragon Synchro that needs any Synchro Tuner and any non-Tuner Clear Wing monster to summon, as a Quick Effect with a soft once per turn when the opponent activates a monster effect to make this monster unaffected by monster effects that turn and have it gain ATK equal to the ATK of the monster who activated its effect, has a second once per turn Quick Effect to negate an opponent’s Spell/Trap Card or effect activation and destroy it, and finally if this card was Synchro Summoned and sent to the graveyard by an opponent’s card, you can add a WIND monster from your Deck to your hand. Hi-Speedroid Clear 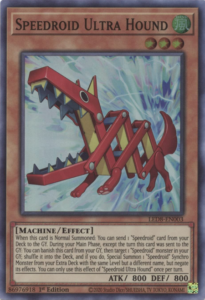 Wing Rider is a Level 11 WIND Machine Synchro that needs any WIND Tuner and non-Tuner WIND monster(s) to summon, can roll a six-sided die once per turn during your Main Phase and shuffle WIND monsters from your graveyard into the Deck up to the result to then destroy cards the opponent controls up to the number of cards shuffled back into the Deck and have this card gain 500 ATK times the number of destroyed cards until the end of the turn, also you can tribute this card during the opponent’s Main Phase as a Quick Effect if it was Synchro Summoned to Special Summon up to 2 Level 7 WIND 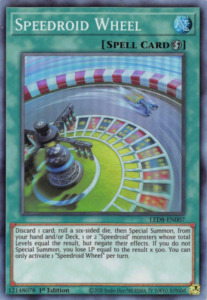 Synchros with different names from your Extra Deck. Speedroid Wheel is a Quick-Play Spell that lets you discard a card and roll a six-sided die to Special Summon from your hand and/or Deck 1 or 2 Speedroid monsters with a combined Level equal to the result, but their effects are negated and if you do not Special Summon, you lose LP equal to the result x500. Finally, Speedroid Dupligate is a Normal Trap that lets you banish a WIND monster from your graveyard to bounce an opponent’s card to their hand, also during your Main Phase while this card is in the graveyard, once per Duel, you can reduce a Speedroid monster’s Level by 1 to summon this card as a monster that isn’t treated as a Trap (Machine/Tuner/WIND/Level 1/ATK 0/DEF 0). 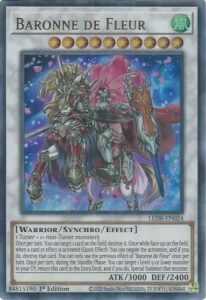 Next up we get the Fleur series of cards finally growing as a theme in this set. Sauge de Fleur is a Level 8 DARK Spellcaster who can target a monster you control and a card on the field to Special Summon this card from the hand and destroy the targets, and upon being sent to the graveyard can target another monster in your graveyard to shuffle it into the Deck and let you add a Level 1 Plant from your Deck or graveyard to your hand. White Steed of the Floral Knights is a Level 6 WIND Beast who can be Special Summoned from the hand if you control a Level 2 or lower monster, and can banish itself from the graveyard when an opponent’s monster declares an attack to target a card you control, 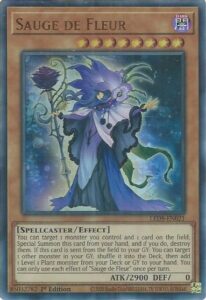 negate the attack, and destroy the targeted card. Necro Synchro is a Level 2 DARK Machine Tuner whose name becomes Fleur Synchron while on the field or in the graveyard, can target another face-up monster you control and increase its Level by 2, and can let you summon a Level 1 Plant from the Deck if its sent to the graveyard as Synchro Material. Baronne de Fleur is a Level 10 WIND Warrior Synchro who needs any Tuner and non-Tuner(s) to summon, can target a card on the field and destroy it once per turn, can negate an opponent’s card or effect once while it’s face-up on the field, and can return to the Extra Deck during the Standby Phase to revive any Level 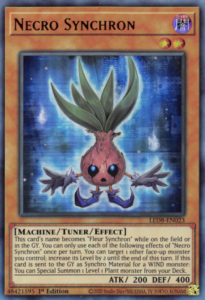 9 or lower monster. Fleuret de Fleur is an Equip Spell that can target and revive a Level 2 or lower monster from your graveyard with its effects negated and have it be equipped with this card, where that monster would be destroyed if this card leaves the field, boosts the eqiupped monster by 700 ATK, and if this card is sent to the graveyard from the Spell/Trap Zone, you can equip this card from the graveyard to a Synchro Monster you control. Synchro Dilemma is a Continuous Spell that can either let you send a Synchron monster from your hand or face-up field to the graveyard to summon any monster from your hand or target another card you control to destroy it and summon a Synchron monster with a different original name from your hand or graveyard. Finally, Pennant of Revolution is a Continuous Trap where if a card(s) you control is destroyed by battle or card effect, you can add a Liberty at Last! from your Deck or graveyard to your hand, can destroy an opponent’s monster your Synchro Monster battles at the start of the Damage Step, and can destroy a monster you control instead if this card would be destroyed. 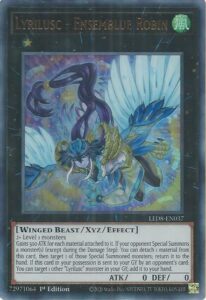 The final archetype to get support in this set is another small series of cards, as we finally get more Lyrilusc cards. Lyrilusc – Beryl Canary is a Level 1 WIND Winged Beast who if in your hand can target a Lyrilusc monster in your graveyard to summon both this monster and the targeted monster, but you can only summon Xyz Monsters from the Extra Deck for the rest of the turn, and a Lyrilusc that used this monster as material gains the effect where it gains 200 ATK and control of it cannot switch. Lyrilusc – Celestine Wagtail is a Level 1 WIND Winged Beast who if Special Summoned can let you add a Lyrilusc Spell/Trap from your Deck to your hand and it can attach itself from the graveyard to a Lyrilusc Xyz you 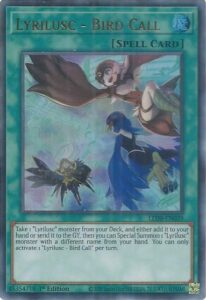 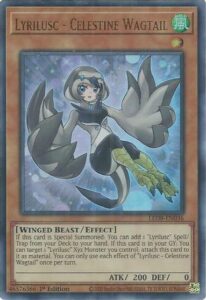 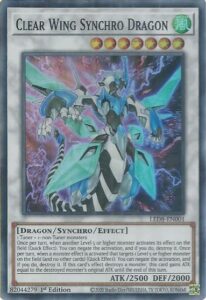 Now for all the reprints in this set for the three archetypes alongside some other various stuff. Speedroids is probably the only archetype that didn’t get most to all of their cards, but most of the important ones are in here with Clear Wing Synchro Dragon, Speedroid Terrortop, Speedroid Double Yoyo, Speedroid Taketomborg, Speedroid Red-Eyed Dice, Speedroid Den-Den Daiko Duke, Speedroid Horse Stilts, Speedroid Marble Machine, Speedroid CarTurbo, Hi-Speedroid Chanbara, Hi-Speedroid Kitedrake, Speed Recovery, and Speedlift. The Fleur series of cards basically are all in here in terms of reprints, which is good considering most of them were video game promos previously, as we got reprints for Sorciere de Fleur, Necro Fleur, Noble Knight Joan, Fleur Synchro, Chevalier de Fleur, Z-ONE, and Liberty at Last! Finally we got all the Lyrilusc monsters minus their Fusion with reprints of Cobalt Sparrow, Sapphire Swallow, Turqouise Warbler, Assembled Nightningale, and Recital Starling. Finally we got some various other reprints for Quillbolt Hedgehog, Synchron Explorer, Unknown Synchron, Rush Warrior, Mariamne, the True Dracophoenix, Stardust Warrior, Stardust Assault Warrior, Totem Bird, Tornado Dragon, and Quill Pen of Gulldos.

Overall, we got a much better Legendary Duelists set compared to last time. Speedroids and Lyriluscs already had a better base than any of the archetypes in the last set, despite the small pool of Lyriluscs we had, so the support just makes competent Decks much better. The Fleur series of cards makes for some cool Synchro plays and Baronne de Fleur is going to take over as one of the best generic Synchros in the game. The reprints aren’t anything insane, but it’s stuff that was much needed to prevent Speedroids and Lyriluscs from getting to expensive and the video game promos from going too far out of print when they’re relevant now. The only downgrade from the last Legendary Duelists is the Ghost Rare, since Crystal Clear Wing Synchro Dragon just can’t compare to The Winged Dragon of Ra, no matter how cool it actually is and the fact it’s actually part of a complete set in Ghost Rare. Overall, a great Legendary Duelists and one of the best ones we’ve received.