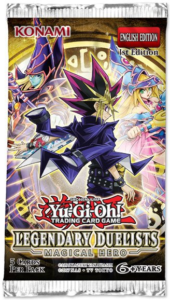 It’s time for the protagonists to get the spotlight. Hello Pojo Readers, Crunch$G here to talk about the sixth installment of the Legendary Duelist series, Magical Hero. This time around, we have a theming of the archetypes used by the first five main protagonists in the Yu-Gi-Oh series, meaning we have new cards for Yugi, Jaden, Yusei, Yuma, and Yuya. We see new Dark Magician cards to represent Yugi, some more HERO cards for Jaden, you got Synchron/Synchro support for Yusei, some Xyz and Onomatopoeia cards to represent Yuma, and Performapal/Odd-Eyes/Magician cards to represent Yuya. We got a batch of characters that are going to be easy fan favorites as they were the main characters for their respective shows, so let’s see what we got in terms of new cards for them. 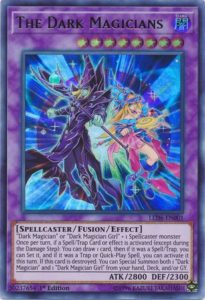 The first protagonist to talk about is the one from the original series, Yugi Muto, and we got some pretty solid Dark Magician cards to represent him. The Dark Magicians is a new Fusion of either Dark Magician or Dark Magician Girl and any other Spellcaster and it lets you draw a card every time a Spell/Trap is used, then it can let you set said card if it was a Spell/Trap card and that same card can be activated that turn if it was a Trap or Quick-Play Spell, then it can summon a Dark Magician and Dark Magician Girl from the hand, Deck, and/or graveyard when The Dark Magicians is destroyed. Magicians’ Souls is a Level 1 that can let you send up to 2 Spells/Traps from your hand or on your field to the graveyard to let you draw an equal number of cards and while it’s in the hand it can send a Level 6 or higher Spellcaster from your Deck to the graveyard to either 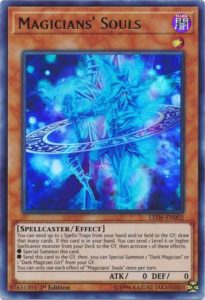 Get Your Game On! 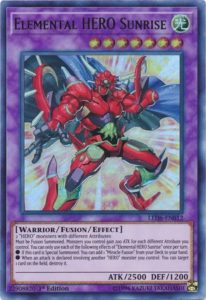 Going in chronological order like always, we now have Jaden and some new Elemental HERO support. Elemental HERO Sunrise is a Fusion of any 2 HERO monsters with different Attributes, must be Fusion Summoned, boosts every monster by 200 ATK for each different Attribute you control, searches for Miracle Fusion from your Deck when this card is Special Summoned, and can target and destroy a card when an attack is declared involving a HERO monster. Elemental HERO Liquid Soldier is a new Level 4 that can revive a Level 4 or lower HERO from the graveyard upon its Normal Summon and if Liquid Soldier is sent to the graveyard or is banished for a Fusion Summon of a HERO monster, it can let you draw 2 cards and discard 1. Generation Next is a Quick-Play Spell that while your LP are lower than your opponent, it can let you add to your hand 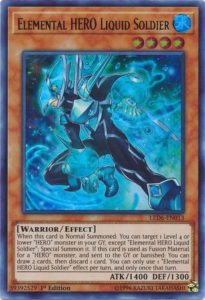 Special Summon any HERO, Kuriboh, or Neo-Spacian monster from your Deck or graveyard with ATK less than or equal to the LP deficit you have, but for the rest of that turn you can’t activate effects of cards with the same name as the summoned monster. Favorite Hero is an Equip Spell that can equip to a Level 5 or higher HERO, lets that monster gain ATK equal to its original DEF and gives it targeting protection while you control a Field Spell, at the start of the Battle Phase can let you activate a Field Spell from your Deck, and when the equipped monster destroys a monster in battle you can send this equip to the graveyard to let that monster attack again in a row. Finally, Magistery Alchemist is a Normal Trap that can banish 4 HERO monsters from your graveyard and/or face-up from your field to revive any HERO, ignoring the summoning conditions, and then if you banished an EARTH, FIRE, WATER, and WIND monster for this effect you can double the summoned monster’s ATK from its original ATK and negate all effects of face-up cards your opponent controls. 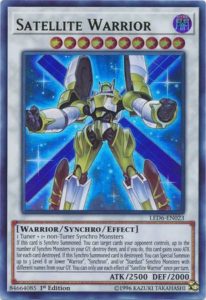 Now it’s time for the Yusei support. First, we have Satellite Warrior, a Level 10 Synchro of any Tuner and any non-Tuner Synchro monster(s), upon Synchro Summon can target cards your opponent controls up to the number of Synchros in your graveyard and destroy those targeted cards and then this gains 1000 ATK for each destroyed card, and then if this Synchro Summoned card is destroyed, you can revive up to 3 Level 8 or lower Synchro Monsters with different names of the Warrior, Synchron, or Stardust archetypes. Junk Converter is Level 2 that can discard itself and any Tuner to search for any Synchron from the Deck and if it’s used as Synchro Material, you can revive any Tuner from your graveyard but it cannot use its effects that turn. Satellite 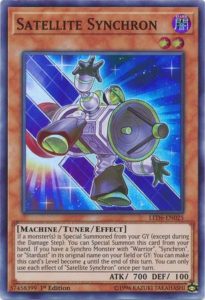 Synchron is a Level 2 Tuner that can Special Summon itself from the hand if you revive a monster from your graveyard, and it can become a Level 4 if you have a Synchro with Stardust, Warrior, or Synchro in the original name on your field or in your graveyard. Synchro Chase is a Continuous Spell that prevents your opponent from using cards or effects in response to the activation of your Stardust, Synchron, or Warrior Synchro monster effects and if you Synchro Summon a Stardust, Synchron, or Warrior Synchro you can revive a monster that was used as material for that summon in Defense Position. Finally, Scrap-Iron Signal is a Counter Trap that can negate a monster effect if you control a Synchro Monster that lists another Synchro Monster as material, and then it can set itself instead of going to the graveyard. 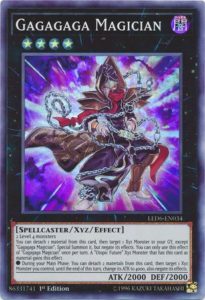 Get ready for tons of onomatopoeia. Gagagaga Magician is a Rank 4 of any 2 Level 4 monsters, can detach a material from itself to revive any Xyz from your graveyard with its effects negated and if this card is used as Xyz Material for a Utopic Future monster, then that Utopic Future monster gains the effect of detaching 2 materials to target a Xyz you control and make its ATK 4000 and negate its effects. Zubababancho Gagagacoat is a Level 4 that can Special Summon itself from the hand if you control a Zubaba or Gagaga monster, and it can revive a Gogogo or Dododo from your graveyard in exchange for locking your Extra Deck plays to only Xyz Summons for the turn. Dodododwarf Gogogoglove is another Level 4 that can let you Special Summon a Zubaba or Gagaga from your hand and it can revive itself from the graveyard if 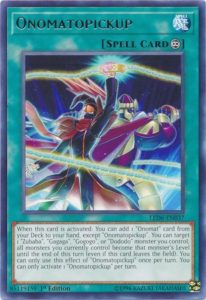 you control a Gogogo or Dododo monster in exchange for locking your Extra Deck plays to Xyz Summons for the turn. Onomatopickup is a Continuous Spell that searches for an Onomat card with a different name upon activation and it can target a Zubaba, Gagaga, Gogogo, or Dododo monster you control and make all monsters you control with a Level become the same Level as the targeted monster for that turn. Finally, Future Drive is a Quick-Play Spell that can target a Utopic Future monster you control and give it the effects to attack all monsters your opponent controls once each, if it battles an opponent’s monster then that opponent’s monster has its effects negated during that battle, and if it destroys a monster in battle you can deal damage to your opponent equal to the destroyed monster’s original ATK.

The Fun Has Just Begun! 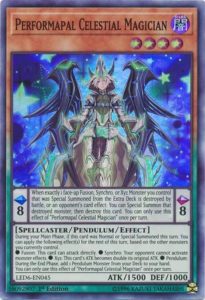 Now we get to Yuya’s cards of the Performapal, Odd-Eyes, and Pendulum Magician theme. Performapal Celestial Magician is a Level 4 Scale 8 Pendulum with a Pendulum Effect that if a Fusion, Synchro, or Xyz summoned from the Extra Deck is destroyed by battle or an opponent’s card effect, you can destroy this card in the scale to revive the destroyed monster and then as a monster it lets you apply certain effects the turn it was Normal or Special Summoned depending on the types of monsters you control (besides itself) with controlling a Fusion lets this attack directly that turn, a Synchro would prevent your opponent from using monster effects that turn, a Xyz would make this card’s ATK become double its original ATK that turn, and a Pendulum would let you search for any Pendulum Monster during your End Phase. Odd-Eyes Wizard 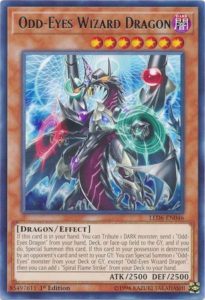 Dragon is a Level 7 that can Special Summon itself from the hand by tributing a DARK monster and sending Odd-Eyes Dragon from your Deck or face-up from your field to the graveyard, and if this card in your possession is destroyed by the opponent you can summon an Odd-Eyes monster from your Deck or graveyard, except Wizard Dragon, and then you can search for a Spiral Flame Strike from the Deck. Performapal Popperup is a Normal Spell that lets you send up to 3 cards from your hand to the graveyard to draw the same number of cards, and then you can Special Summon monsters up to the number of drawn cards that are Performapals, Odd-Eyes, or Magician Pendulums from your hand with Levels between the Scales of Pendulums in your Pendulum Zones, or you lose 1000 LP for each card in your hand if you didn’t summon a monster with this effect. Smile Action is a Field Spell that can let each player banish up to 5 Spells from their graveyards and and lets a player being attacked be able to activate the effect to let you randomly add 1 of the cards banished off this effect to your hand and then you can either discard that card to negate that attack or not discard the card and the damage will be doubled in return. Finally, Pendulum Dimension is a Continuous Trap that can apply an appropriate effect if you summon the specific monster using a Pendulum Monster as material with summoning a Fusion letting you Special Summon a monster with the same Level as that Fusion Summoned monster from your Deck in Defense Position with its effects negated, a Synchro Monster letting you search for a Polymerization, and an Xyz Monster letting you take a Tuner from your Deck with a Level equal to or lower than the monster’s Rank and either add it to your hand or Special Summon it. 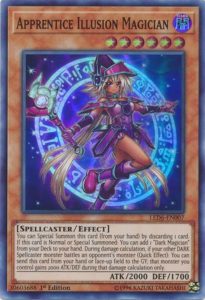 Now it’s time for reprints, and there are some pretty good reprints in this set. For Yugi’s reprints, you got some necessities and some good optional cards for Dark Magician Decks like Magician of Dark Illusion, Apprentice Illusion Magician, Magician’s Rod, Dark Magical Circle, Illusion Magic, and Magician’s Navigation alongside a reprint for Dark Magician Girl. For Jaden’s reprints you got a Winged Kuriboh, Neo-Spacian Aqua Dolphin, and Skyscraper with the most noteworthy reprints being Elemental HERO Honest Neos, 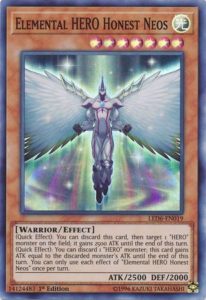 Anything to do with the protagonists of the series are likely to retain a lot of future value, but there are some great cards in here. Dark Magician got a pretty solid boost, though Magicians’ Souls does leave room to be abused outside Dark Magician Decks. HEROs got some great pieces in Sunrise and Liquid Soldier to be more competitive and you got some other cool cards, especially some that give cool anime throwbacks. Yusei’s new cards give Synchros a great boost for the future with some great cards. Yuma gives us more Rank 4 Spam, which is still the best toolbox in the game. Finally, there are some cool Pendulum and Odd-Eyes related cards for Yuya with the best being Celestial Magician, though Wizard Dragon is nice for Odd-Eyes Decks. There are some pretty good reprints in here as well, maybe not value wise but it gets these cards in the hands of players and most of them would be useful for the strategies supported. Overall, I really like this Legendary Duelists, though I hope it isn’t the last one just because this one does give us new protagonist cards.