Home Yu-Gi-Oh! Yu-Gi-Oh! Featured Writers Yu-Gi-Oh Legendary Duelists: Duels From the Deep – What You Should Know Ready to go under the sea? Hello Pojo Readers, Crunch$G here to talk about the latest Legendary Duelists set to release: Duels From the Deep. As you might of guessed already from the name alone, this Duelist Pack is based on the WATER Attribute, following up the Attribute-themed Legendary Duelists we previously got. Like the last two sets, we get three Duelists from the anime getting support for their strategies. Shark/Nash is the first Duelist in here with his Shark and Barian cards. Mako is your cover Duelist with a bunch of brand new Umi-related cards. Finally, we get to Blue Maiden and her Marincess cards, finally seeing a Vrains character appear in one of these sets. With all that out of the way, let’s dive into this set and salvage up everything that’s in here. As the trend continues with Legendary Duelists now, we get a Ghost Rare in this set to chase after. Despite Mako being on the cover, the Ghost Rare goes to Shark, the original cover Duelist of the set, as we see Number 101: Silent Honor ARK appear in Ghost Rare. I’d say this is an improvement over Crystal Clear Wing from the last set, which flopped. This card at least has past format use and it goes with Number collecting pretty well, as this is now the highest rarity for Number 101 there is in the TCG. Still doesn’t top the collectability of Ra as a Ghost Rare, but it’s still a pretty nice collectible to have, especially for Number Hunters. 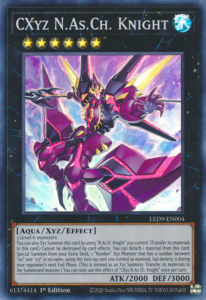 Following up from Number 101 being the Ghost Rare, we get straight into the new Shark and Barian cards that appear in this set. Abyss Shark is a Level 5 WATER Fish who can be treated as a Level 3 or 4 for the Xyz Summon of a Number monster, can be Special Summoned from the hand if all monsters you control are WATER, then you can add a Level 3-5 Fish from your Deck to your hand that isn’t Abyss Shark, but you can only Special Summon monsters that are WATER for the rest of the turn and during that turn, double the first battle damage the opponent would take from your Number monster battling an opponent’s monster. Crystal Shark is another Level 5 WATER Fish who can also be treated as Level 3 or 4 for the Xyz Summon of a Number and can be Special Summoned from the hand or graveyard by targeting a WATER monster you control and halving its ATK, but this card is banished when it leaves the field and you can only summon Xyz Monsters from the Extra Deck for the rest of the turn. N.As.H. Knight is a Rank 5 WATER Aqua Xyz that needs 2 Level 5s to summon, can’t be destroyed in battle while a Number is on the field, and has a Quick Effect during the Main Phase to detach 2 materials from itself to attach a Number Xyz with a Number between 101 and 107 in its name from your Extra Deck to this card alongside another face-up monster on the field. CXyz N.As.Ch. Knight is a Rank 6 WATER Aqua Xyz that either takes 3 Level 6 monsters to summon or can be summoned on top of a N.As.H. Knight you control, it cannot be destroyed by card effects, and you can detach a material from this card to Xyz Summon a Number monster that has a number between 101 and 107 in its name from your Extra Deck by using this card and its Xyz Materials as material. Barian’s Chaos Draw is a Normal Spell that you must draw for your normal draw in the Draw Phase to reveal and activate in the Main Phase 1, where then you can either send a Seventh Normal Spell from your Deck to the graveyard to have this card’s effect become the effect of the sent card’s, or you can Special Summon up to 2 monsters from your Deck with their effects negated and then immediately Xyz Summon a Number monster by using monsters you control as materials, including the 2 summoned monsters. Seventh Ascension is a Normal Spell that lets you take a Barian’s Spell/Trap, a Rank-Up-Magic Quick-Play Spell, or a Seventh Spell/Trap that isn’t Seventh Ascension and either add it to your hand or place it on top of your Deck, also if your opponent controls a monster that was Special Summoned from the Extra Deck, you can banish this card from the graveyard and send a Rank-Up-Magic Spell from your hand to the graveyard to have this effect become the effect of the sent card. Finally, Seventh Eternity is a Continuous Trap that lets you target a Number Xyz that has a number between 101 and 107 in its name or an Xyz Monster that has any such monster as material and activate an effect to either negate the effects of 1 monster the opponent controls with ATK less than or equal to the ATK of the targeted monster or you can detach all materials from the targeted monster and then summon a Number Xyz from your graveyard. Next up, we look at Mako’s new cards, which are retrains of all of his classic monsters as Umi support. Mega Fortress Whale is a Level 7 WATER Fish who can activate the effect to let all WATER monsters you control attack directly that turn if Umi is on the field, has a Quick Effect during the opponent’s Battle Phase to target a face-up monster they control and destroy it, and if this card on the field is destroyed by battle or card effect, you can either add to your hand or Special Summon a WATER Warrior monster from your Deck or graveyard. Ocean Dragon Lord – Kairyu-Shin is a Level 5 WATER Sea Serpent that only lets each player control just 1 non-WATER monster while Umi is on the field (where a player that controls 2 or more must send monsters to the graveyard so they only control 1), and also during your Main Phase you can add an Umi, a Kairyu-Shin Spell/Trap, or a Sea Stealth Spell/Trap from your Deck to your hand. Doom Kraken is a Level 4 WATER Aqua where if Umi is on the field, you get a Quick Effect to target a WATER monster you control and a monster the opponent controls to Special Summon this card from the hand to then return your targeted monster to the hand and destroy the opponent’s monster, also you can return this card to the hand when an opponent’s monster declares an attack to negate said attack. Electric Jellyfish is a Level 4 WATER Aqua who can let you send an Umi from your hand, Deck, or face-up field to the graveyard to summon any WATER monster from your hand and it also has a Quick Effect while Umi is on the field and the opponent activates a monster effect or a Spell Card/effect where you can negate that effect and then you can make this card gain 600 ATK/DEF. Fish Sonar is a Normal Spell that lets you add a Level 7 or lower monster from your Deck that mentions Umi or any WATER Normal Monster, and then if you control Umi you get to Special Summon a WATER Normal Monster from your Deck. Sea Stealth II is a Continuous Spell that’s treated as Umi while on the field or in 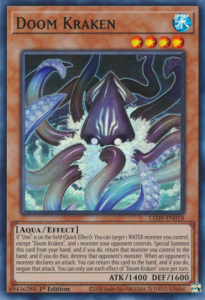 Finally, we look at the new wave of Marincess support in this set. Marincess Springirl is a Level 4 WATER Cyberse who can be Special Summoned from the hand by banishing a Marincess monster from your graveyard and if this card is sent to the graveyard as Link Material for a WATER monster, you can send the top cards of your Deck to the graveyard equal to the number of Marincess monsters you control and then inflict 200 damage to the opponent for each Marincess card sent by this effect. Marincess Sleepy Maiden is a Level 5 WATER Cyberse who can target a Marincess card you control to Special Summon this card from the hand and gains the effect that while it’s in the Monster Zone, the targeted card monsters the turn you use either of this card’s effects. Marincess Aqua Argonaut is a Link-4 WATER Cyberse who needs 2+ WATER monsters to summon, is the only monster your opponent can attack while it’s in the Extra Monster Zone, can target a WATER monster you control and a card the opponent controls to return them to the hand, and has a Quick Effect on the opponent’s turn when a Spell/Trap Card or effect is activated on the field to Special Summon a Marincess monster equipped to this card and negate the effect of the activated card. Marincess Dive is a Normal Spell that can either let you target a non-Link Marincess in your graveyard to Special Summon it or if Marincess Battle Ocean is in your Field Zone, you can Special Summon a Marincess from Deck, but you can only Special Summon WATER monsters for the rest of the turn after this card resolves. Marincess Circulation is a Normal Trap that lets you target a WATER Link you control to return it to the Extra Deck to summon a Marincess from the Extra Deck with the same Link Rating but different name, but it cannot attack directly or be destroyed in battle that turn (this is treated as a Link Summon), also this card can be activated from the hand if you control a Link-3 or higher Marincess. Finally, Marincess Bubble Ring is a Normal Trap where when the opponent’s monster declares a direct attack, you can negate that attack and Special Summon a Marincess Crystal Heart from your Extra Deck or graveyard, also you can banish this card from your graveyard to target a Link-2 or higher Marincess monster you control to let it attack a number of times each Battle Phase up to its Link Rating, but your opponent takes no damage from battles involving it for the rest of the turn. I mean, it doesn’t really look that bad on paper, just it was going to be hard to sell if we go based off Synchro Storm and how poorly that did, even with Baronne de Fleur. Rage of Ra at least had the Ghost Rare and alternate art Ra alongside Egyptian God Slime finally being printed, which is why that box is holding up. Maybe this set could hold up if we see Synchro Storm gaining future value at least. The Shark and Marincess cards are honestly pretty great for their respective Decks, while the Mako cards are fine for what they are, but struggle to make a coherent strategy just by theirselves. The Ghost Rare is nice, and we got some nice reprints at least like Bahamut Shark, Number 106, and Forbidden Droplet. I just wish this set could be better than what it’s likely going to end up being, to be completely honest.