Hello readers! Vince here with another late card review! This time, I’m looking at Xerneas BREAK. This is one of the Break Evolutions that I had the most fun using, but at the same time, frustrating to get a playset on since this card was around $15-$20 at one point during late 2016. This card was reviewed on August 15, 2016 as the fifth best card of XY Steam Siege.

Being a Break Evolution of a Basic Pokémon, it takes only two cards from your deck and you would have to wait for one turn to Break Evolve unless you played Wally. Xerneas Break is a Fairy type with 150 HP and maintains the Abilities, Attacks, Weakness, Resistance, and Retreat Cost from it previous Evolution. This card only adds in one more attack called Life Stream, which costs YY, and does 20 damage times the amount of energy attached to all of your Pokémon. This attack could potentially be good if you are able to maintain the amount of energy on the board. Without any help, YY for 40 damage seems low. 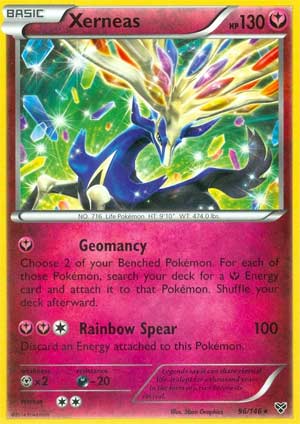 So Xerneas BREAK has done well for itself, but it would probably be better if their previous evolution has something to offer. Xerneas XY/Steam Siege has two attacks. Geomancy costs Y and it lets you search your deck for two Fairy energy to two of your Benched Pokémon (one Fairy energy for each benched Pokémon). Rainbow Spear does 100 for YYC and forces an energy discard from Xerneas. This card was the ninth best card of XY. The first attack would be the reason to use this card. Xerneas XY31 Promo has two attacks. Aurora Gain does 50 for YCC and removes your weakness until the end of your opponent’s turn. Light of Life does 80 for YYCC and does 40 more if your opponent has an Yveltal or Yveltal-EX in play. Both attacks are underpowered and over-specialized. Xerneas from XY BreakThrough has two attacks. Rainbow Force costs YCC for 10 damage, plus 30 more for each different type of Pokémon on your bench. Power Creation does 80 for YYCC and does 80 more if this Pokémon was healed during your turn. So something like Pokémon Breeder, Potion, etc. will fulfill the requirement. This card was the main focus of making the best of Rainbow Force, but requiring too many partner can make you risk starting with them instead of Xerneas and getting prone to being dragged active and KOed. Another recent Xerneas card from SM Crimson Invasion has two attacks. Lead costs C and lets you search your deck for a Supporter card and put it onto your hand. Bright Horns costs YYY and you can’t use this attack on your next turn. This Xerneas could be a fallback option in case Life Stream isn’t doing enough damage to your liking.

I was searching for tournament placings regarding decks featuring Xerneas BREAK. So far, all seven decks that I see are 4-3 or 4-4 line of Xerneas Break. I must be seeing the mid 2017 onwards placings. The go-to Basic Xerneas was the XY/Steam Siege version. I guess that’s because Geomancy provides energy acceleration even though you’re using an attack for it. Getting two Fairy energies from your deck to your benched Pokémon thins your deck and can help prep for Life Stream or other attacks. Other partners include Tapu Lele-GX and Oranguru. Tapu Lele-GX is pretty much universal in almost every deck because of its stellar consistency for searching your deck for a Supporter card so that you can use it on the same turn. Oranguru’s Instruct ability provides draw power, even though a potential three cards may seem low, but it’s better than nothing. The decks that I see looks pretty good and functional and there are other partners listed there such as Tapu Koko promo and Gumshoos-GX; you can see it here.

Overall, Xerneas Break still makes some tournament placings, and somewhat shows that it hasn’t faded from the spotlight yet. The next set, SM Ultra Prism, may say otherwise, with Metal getting some support based on what I saw from PokeBeach’s leaks. But you could say the same in pretty much any Pokémon with weaknesses. The cycle never ends when it comes to type matchups. Something along the lines of metal making fairies disappear; fire makes metal disappear; fairies come back to compete again.  In Limited, if you manage to get both the Basic and the Break, with a couple partners holding energy cards for you, you could potentially sweep your opponent!

Notes: Xerneas BREAK has a good-to-great scalable damage, and some of it’s basic incarnations are pretty good as well. Go ahead and grab a playset of Xerneas cards and try it out yourself!