Home Games Board Game Reviews World of Warcraft: Wrath of the Lich King – Pandemic Board Game... 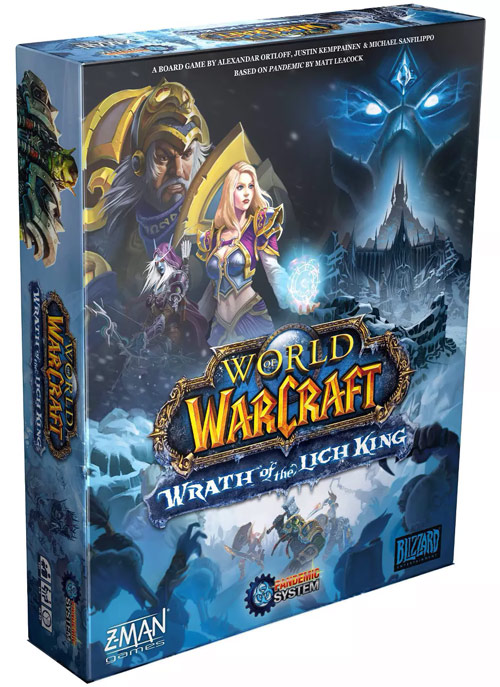 There is a new co-op Pandemic game on the block, and this one is wearing World of Warcraft armor!

I am a huge fan of the World of Warcraft MMO, and have been playing since vanilla.  My Dwarf Paladin spent a considerable amount of time flying around Northrend grinding out as many achievements as I could during the Lich King expansion.

In late 2021, ZMAN Games and Blizzard put a new face on the Pandemic system.  This time around, the Lich King is spreading the Scourge throughout the continent of Northrend, and a group of well known World of Warcraft adventurers must band together to stop him.

Does this mix of Pandemic and Warcraft work well together? Is it like peanut butter and chocolate in a Reese’s Peanut Butter Cup?  Let’s have a look.

The “World of Warcraft Wrath of the Lich King: A Pandemic System Board Game” box is 10 inches x 12 inches x 2 inches, and it is jam-packed full of goodies.  Here is what you will get inside:

The game board folds out to be about 19 inches x 30 inches.  Game play takes approximately 45-60 minutes.

In the original Pandemic board game, you would assume one of seven possible roles: dispatcher, medic, scientist, researcher, operations expert, contingency planner, or quarantine specialist.

In this Warcraft version of Pandemic, you get to be one of seven heroes of Azeroth: Thrall,
Muradin Bronzebeard, Jaina Proudmoore, Sylvanus Windrunner, Varian Wrynn, Tirion Fordring, or Lady Liadrin. Each hero has varying amounts of health points at the bottom of their cards.

In the original Pandemic board game, the villains were wooden virus cubes that spread around the globe.  In the Warcraft version of Pandemic, the villains are Scourge miniatures (undead ghouls and more) that spread around the map.  In addition, there are Abominations that wander the roads looking for trouble – like Stitches in Duskwood.  And you will ultimately have to take down the Lich King himself in order to win.

World of Warcraft: Wrath of the Lich King Pandemic Gameplay

Here is a very simple overview of gameplay.  For experienced players of Pandemic, you will find this Lich King version feels fairly similar to the original base game.

Scourge miniatures will be placed around the map of Northrend.  As will 1 Abomination, and Lich King himself.  You will not be able to attack the Lich King directly until the End Game.  There will also be 3 Quest Sheets (dungeons) placed on the board.

Players will take turns attacking the Scourge on the map, or working their way to the dungeons and trying to complete those instances.  You will need to complete all 3 Quest Sheets before you can enter Ice Crown Citadel and battle the Lich King.

On a player’s turn they will (in this order)

A player’s 4 Actions are:

You can do any action multiple times if you want, but you cannot exceed 4 actions.  After your turn, you will: draw 2 Hero cards, Spawn more Ghouls on the map, and Move all Abominations one space closer to the nearest hero.

In the original Pandemic Game, players collected sets of cards to wipe out the virus.  The Hero cards are used in this version of amplify attacks and defense.

Heroes will defeat Scourge by rolling the dice.  The dice have gauntlets and shields on them to indicate your attacks power and defense power.  You will defeat the Scourge with good dice rolls, and take damage if roll poorly, and/or are outnumbered by Scourge forces on your space.  The Lich King will give the Scourge a Damage Bonus if he is in the area too!

The game is a fine balance of keeping the Scourge at bay, and knocking out the 3 instances.  The Heroes need to work together as a team of accomplish that goal.  Each hero has two Special Abilities that might benefit the team inside the instance, or out in the land of Northrend itself.  Special Abilities can only be uses once per turn.

For example, Thrall has an Special Ability called Chain Lightning that will hit multiple Scourge at once.  So, he’s better suited for walking around Northrend and taking down Ghouls.  Muradin Bronzebeard can contribute 1 additional card only to his own quest actions making him ideal for tanking a dungeon.

Once all dungeons (Quests) are completed, then the walls of Icecrown Citadel will come down, and players can attack the Lich King himself!

There is a despair marker that keeps track of bad things that happen in the game.  If your character dies.  You will resurrect at your home base, but the despair marker moves down.  If you are supposed to summon some ghouls, but there are none, you will suffer more despair.

If the despair marker reaches the bottom of the despair track, the invasion of Northrend fails, the Lich King’s terrible plans come to fruition, and all players immediately lose the game.   If you complete all 3 quests, and then complete the Icecrown Citadel quest, the
players defeat the Lich King and immediately win the game!

Locations are actual Northrend Locations – like Dalaran and Amberpine Lodge.  And Quests are actual instances in Northrend – like Naxxramas and Azjol-Nerub!

The components are great, and a giant step up from the original Pandemic.  There are 47 detailed miniatures in the box, along with high quality playing cards.  The dice are also of good quality. Icecrown Citadel is simply cardboard, but it is an effective prop here.

All the Special Abilities of the Heroes are properly thematic based on their World of Warcraft abilities.  Some examples,

The rulebook is well written and in full color.  You can take a look at it right here on Zman’s site if you want.

5 Players!  My gaming group consists of 5 players quite often.  The original Pandemic only played up to 4 players.  This one goes to 5, and plays well at 5.

If you love to paint miniatures, you get some really nice sculpts in this box.

Pretty easy game to teach and play.  Setting up the board is a bit tedious, but the game play itself it fairly simple.  You move.  You attack by rolling dice.  And/or you heal yourself. Then it’s the Scourge’s turn.  Gameplay is not complicated for new players to learn.

There is a solo variant.  I will be honest, I have not tried it, but it is here for you solo gamers.

The game has 4 difficulty levels.  These will determine how often, and how many Scourge spawn during the game.  You can ease yourself into this game if you want.

The Warcraft theme will not be for everyone.  The theme pays tremendous homage to the World of Warcraft MMO, but this will be wasted on people that never played the online game.  Those players might prefer a completely different version of Pandemic.

The box insert is nothing special.  But the box holds everything nicely.

If you like World and Warcraft, and also enjoy Pandemic, then this is a no-brainer must buy co-op game!  You will fall in love with the miniatures, special abilities, theme and gameplay.

I am not sure you really need this in your collection if you are not a World of Warcraft fan though.  There are about a dozen different versions of Pandemic, and you can choose a game that fits your style.

This version is definitely staying in my collection, and I look forward to painting the Heroes and the Lich King!