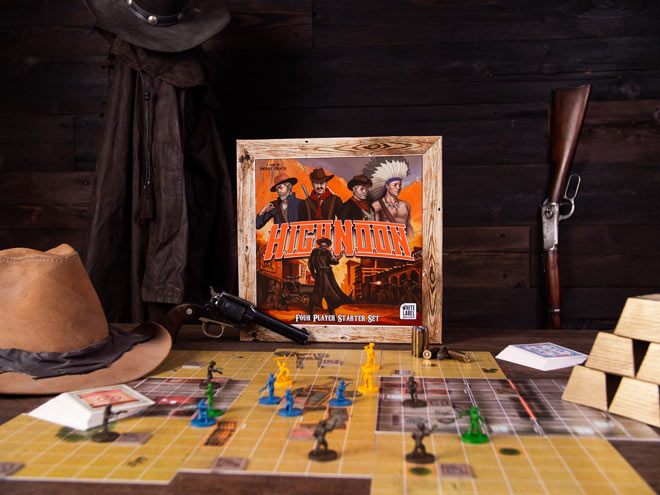 NEW YORK, NY (March 5, 2021) – High Noon Game Inc., a board game company recently announced the release of its highly anticipated, tactical card-based miniatures combat board game, High Noon. Set in an immersive and cutthroat turn of the century Wild West world, the goal of the game is to achieve dominance playing as the gunslingers from the World of High Noon, known as “posses”, each has a unique playstyle and strength. The player with the most gold at the end of 12 rounds wins. High Noon will be available via Kickstarter for the next 30 days with the goal of raising $60,000.

High Noon’s game play is unique, simple and requires no dice. All movement and actions are baked into the cards, character sheets and phases of each turn. There are three types of cards you can draw in the game, Basic, Special and Loot cards. Basic cards have attack and defense values on them. Special cards have additional values and further instructions on them that explain how and when to play them and what they do. Loot cards can either include extra weapons, armor or modifying gear to make the characters who possess them stronger or give them a temporary boost in a last-ditch effort to score!

“Being a Wild West fan myself, I made it my mission to create the most authentic shootout game the industry has ever seen,” said Dwight Cenac II, Creator of High Noon. “With this mission, our team took the time and effort needed to produce a quality game that transports you to a different time and place. Given our hard work, we feel Wild West fans and newcomers alike will enjoy High Noon and every exhilarating gameplay it provides.”

Unlike other board games, High Noon is ever-expanding. The board consists of beautifully designed tiles that represent buildings, roads and various terrain, which can be arranged in any formation, ensuring no two games are ever alike. Throughout the game, players control groups of characters known as “posses” using multiple decks of cards. Each deck is unique to each team, giving them special abilities to use while attacking their opponents. To entice further actions, every battlefield is filled with crates of randomized loot that players can equip and customize their characters with. Additionally, new posses are introduced as the story of the High Noon Universe evolves, each with their own unique abilities and playstyles. Players can collect them all or choose their favorites, providing for a unique and versatile play experience with no wrong way to pick your posse and dominate the board.

The High Noon Starter Set can be played with two to four players (or more with expansions!) at a time and is for ages nine and up. With the campaign launching, backers are encouraged to support the campaign now on Kickstarter as its success decides the size and scope of the retail roll-out. The Kickstarter campaign is packed with expansion packs, each of which adds value and changes the gameplay. Many of these expansions will be available as stretch goals while others are included in the campaign’s pledge levels. This allows for players to customize their experience even more every time they play. With miniatures, game tiles, chips, tokens and cards, each expansion pack is full of new content and assets. High Noon has developed awesome Kickstarter-exclusive Loot cards, which everyone who supports the Kickstarter campaign will get for free as each stretch goal is unlocked. Each unlocked stretch goal will also be made available as an optional buy. If all of the stretch goals are unlocked, in total, there will be 50 Kickstarter exclusive cards that will add new weapons, ammo, and outfits to the game.

“We are so excited to debut High Noon via Kickstarter so our fans can get the chance to try it out for themselves,” said Cenac. “What differentiates us from other Wild West games is the fact that no game is ever the same. Also, the possibility to add on 50 exclusive Kickstarter cards will provide further value to the game. That being said, we can’t wait to see what our supporters think of the game and to see what’s next for us as a company .”

High Noon is for two or more players and is for ages nine and up. Backers are encouraged to support the campaign on Kickstarter on the first day with early-bird pledge options ranging from $12 to $300. For additional information, follow us on Facebook and use the #pickyourposse and #highnoongame.

High Noon Inc., was founded in 2019 with the mission of bringing a Wild West combat adventure to tabletops across the country. The company’s first product release, High Noon is a miniature tactical board game set with complex characters and well-crafted design. The fast paced, adventure board game was created by Dwight Cenac II, a game manufacturer and distributor, who shares a passion for gaming and business.