Home Featured Articles To Be Un-Like Anyone- MTG 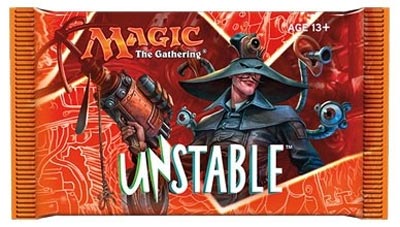 It’s a pretty open secret around here that I don’t really play Standard any more. I do keep an eye on some of the top decks, because I am after all a Card of the Day writer and the majority of our reviews are from Standard sets, but I haven’t actually assembled one of those decks in quite a long time. If you scan through my reviews on this site, you’ll note that I often refer to decks from Shards of Alara Standard, or Lorwyn Standard, or Time Spiral Standard . . . anyway, my references are rather far off the most recently-travelled roads, and so it may not surprise you to hear that I also sometimes play with silver-bordered cards. Unstable is coming out soon, and so you should take the opportunity to consider doing the same.

Why, you may ask? There are, after all, a number of superficial reasons why not. Certain online databases list every single silver-bordered card as “illegal” even in social settings like Commander, putting them in an adjacent category to stigmatized cards like Trinisphere or Strip Mine. Even cards whose power level doesn’t approach those two do things that completely alter a game of Magic, sometimes in unpredictable ways. Beyond that, Unhinged‘s signature gotcha mechanic is infamously powerful as a tool for griefing – isn’t the whole point of casual Magic to make friends, not lose them?

I described issues like these as superficial – and I do believe that they are. Gotcha cards exist. This does not mean you have to use them. We exclude tens of thousands of cards each and every time we sleeve up a deck, whether it’s because they don’t fit your strategy, or they would stretch the deck to more colors than you want or need to be; or simply because you enjoy playing with different cards. The idea of exclusively using certain cards as a staple or “best” alternative fits in competitive settings; it does not necessarily fit in casual ones. Away from PTQs and FNM, the first and last line is what you and your friends enjoy. 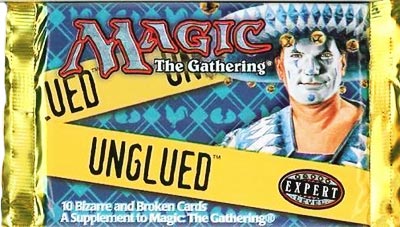 This is also why I don’t put much stock in the fact that Unglued and Unhinged have previously been designated illegal by, say, the Commander rules committee. Why, for a social format like Commander, would the way one group plays be in any way the same as the way another one does? Why should it be? Each group is made up of completely different people with different tastes and preferences. Even something like 93/94, where the card pool is limited, has a great deal of regional variation in practices and preferences.

And for groups that do decide to dive into the silver-bordered world, there is surprisingly much to explore considering the sets’ relatively small sizes. The fact that cards can completely alter the operation of a game of Magic is, in truth, an advantage. Unglued and Unhinged offer something that few other sets have truly pulled off in the long run: cards that change the way you look at playing Magic and building decks, beyond the simplistic “choose aggro/midrange/control, choose colors” flowchart.

This is a big deal, of course. It should not be taken lightly. Magic is a complex game as it is, and decks with a highly divergent focus can be overwhelming – and paralyzing – in high enough doses. Caution is required, and the consensus of your playgroup. But we live in an era where you could, if you chose, learn exactly what people on the other side of the world are playing and base your deck choices on that; and silver-bordered cards represent an effective response to the homogenizing trends introduced by the internet. 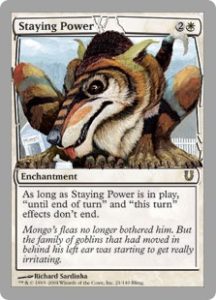 On one level, Staying Power falls into the class of silver-bordered cards that break the rules just for a sake of it. On one level, that is true. But any deck that has ever assessed a card that only gives a simple temporary power and/or toughness boost as too narrow will reconsider when it choose to use Staying Power. It gives you a reason to actually try Kindled Fury alongside Lightning Bolt. It changes the complexion of the exalted ability, turning it into an aura-less Voltron strategy, and somehow manages to make it even more fragile in the face of removal on the single attacker.

How about Frazzled Editor? 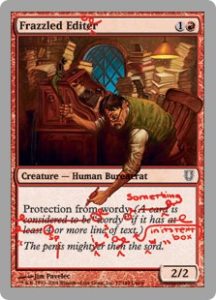 Are you used to thinking of red as having such resilient creatures? If you’re old enough to get my references to Hand in Hand and Solar Flare, you may remember Genju of the Spires. Even if you’re not, though, perhaps you will get some enjoyment out of noting that aversion to wordiness is an incredibly, characteristically red attitude, even if “wordy” has no meaning in tournament Magic. You may come to appreciate an answer to targeted removal with an unusual approach that is harder than usual to get around. (Or, if you’re on the other side of that matchup, you may appreciate another excuse to break out your textless FNM promos . . .) 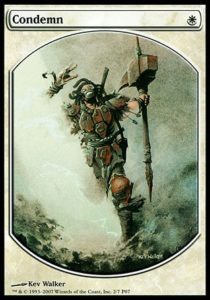 These are relatively simple examples. I’ve only really scratched the surface here – it’s hard to look through a spoiler list for Unglued, Unhinged, or Unstable without seeing something that sparks the imagination. The next time you find yourself burning out on a deck or a card, pause for just a moment and consider whether what you really need is a dash of silver.