Home Featured Articles The Moon That Breaks The Night: A Gameplay-Free Review of Midnight Hunt...

Well, this took me a long time.

Every Innistrad set so far has been an absolute flavor home run. It’s insane how good they are on this metric. Every card is evocative, whether of a character or a concept or an H.P. Lovecraft story. Every card makes you feel something, whether it’s hope or danger or fear (lots and lots of those last two). Every card is great to just hold in your hand and look at, and be transported to a mental realm beyond. And for a plane like that, one set is usually not enough.

This was an issue with Throne of Eldraine‘s release, and with Kaldheim‘s too. Much like a good book, you often want to spend as much time as possible in a set like that, whether that’s measured in months drafting it or years using it in casual decks. Note that our next visit to Dominaria, a similarly significant and lore-friendly world, is also going to involve two consecutive sets.

But now that both sets have come together, Innistrad has never felt more like a real, living, vibrant, complex place. It may have started as a Plane of Hats (literal as well as metaphorical), but it has evolved into something far beyond that. Consider that the first block, from 2011, had five tribes, and various factions and character types, but arranged them in a largely dualistic manner. Humans versus monsters generally; Church of Avacyn versus Skirsdag in white and black, and so forth. But then, in Midnight Hunt, we got cards like this:

This is a big deal. The decline of the Church of Avacyn didn’t lead to a single-facet world. Wizards of the Coast didn’t resort to hand-waving or shenanigans to maintain the status quo. It would have been easy to do so – they’ve done things like that before. But they actually went deeper into the world and added elements we hadn’t seen, not all of which fit neatly into the frameworks of previous sets. Midnight Hunt has a lot of content about pre-Avacyn religious beliefs, which are inspired by European folklore about the circle of the seasons and the power lurking in dark forests. And Crimson Vow goes deeper than previous sets into the vampires’ lifestyle, its baroque decadence and near but horrifying parallels with human society. I give Wizards of the Coast credit for that.

I also can’t help but notice that Midnight Hunt and Crimson Vow have a brighter color palette than many previous Innistrad cards, and much more light and visibility in their art. This, in fact, makes them among the scariest Innistrad sets. There are a few ways of generating fear in game art like Magic’s. The first Innistrad block evokes horror movies, especially the sort that use jump scares. Shadows Over Innistrad is like illustrations for the Lovecraftian stories it’s based on, with the fog and gloom providing a visual metaphor for secrets the human mind literally can’t perceive. Midnight Hunt and Crimson Vow are horrific events in broad daylight – things you don’t want to see, and you don’t want to know, but that you can’t deny. 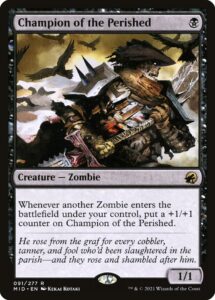 I’m biased towards that style of art in general, but I wouldn’t be too surprised if it’s part of Innistrad’s future, too. Sometimes, the scariest things are those that you pause and think about just enough to realize the horrifying implications. Champion of the Perished still holds his duty in his decaying skull, and probably will until he falls to dust. You know that giving  in to enticement by characters like Falkenrath Celebrants means a night of passion and an eternity of damnation, but you feel the pull anyway. Cerebral horror is more difficult to make and to engage with, and less overt than jump scares, but it holds up much better on the second, third, and twentieth viewing.

But I should probably stop short of making overt predictions – after all, there are few things scarier than a distortion of something familiar. And since Innistrad is now a deeper and more complex plane, we’ve probably only scratched the surface of its horror. I’m looking forward to diving deeper – while anticipation is another part of horror, in the case of Innistrad, it’s also justifiably part of excitement.