Home Magic: The Gathering MTG Card of the Day The Book of Vile Darkness – MTG Forgotten Realms Card of the...

The Book of Vile Darkness
– D&D: Adventures in the Forgotten Realms 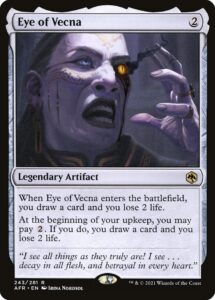 I find it mildly amusing that the Book of Exalted Deeds got banned, while its evil counterpart seems unlikely to suffer the same fate. Both of them are potentially powerful and unique in their effects, but Vile Darkness is marginally easier to deal with in some ways. Even so, its “worst case” still gives you an advantage for something black is usually good at anyway, and when you do manage to go big and summon Vecna, he’s quite intimidating and puts a lot of pressure on the opponent. It’s unfortunate that he has a weak point against opponents who play Pacifism-style cards, but when it all comes together (and when timed properly), it’s plenty good enough to steal games from any opponent. 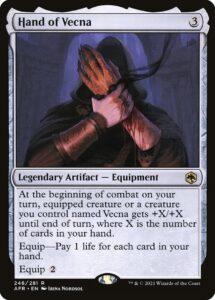 If this set had come out in the 1990s, I wonder if the magazines would have gotten in on the famous practical joke and claimed there was a super-secret Head of Vecna card in either the main set or possibly an upcoming sequel.

The Book of Vile Darkness seems to be done as a bit of a mirror to The Book of Exalted Deeds: you get something for losing life in this case, and it’s a lovely little Zombie. Admittedly, the main attraction of this is not the passive ability, but the ability to call forth Vecna, who absorbs the abilities the Hand of Vecna, Eye of Vecna, and the Book itself in addition to being an 8/8 with indestructible on its own. Of course, the issue is finding all three parts; while black is good at tutoring in general, you still need to commit at least eight mana and three cards to getting Vecna’s parts on board, without any of them getting removed. The Book of Vile Darkness is arguably the weakest of the three components, but still is key to this going off.

I’ve talked a lot about Vecna, largely because The Book of Vile Darkness is, probably deliberately, underwhelming without all their parts to come out. The Zombie trigger only comes about on your end step, obviously rewarding you paying your life to accomplish Things and Stuff. Relying on two other cards to be good, particularly with such a demanding color limitation, seems to bode ill for Constructed play, but at least it’s a cool idea.

Constructed: 2
Casual: 4
Limited: 2 (the main issue is that you need to pay life on your turn to make this work, and the chances of drafting all three Vecna parts are lower than my standards)
Multiplayer: 3
Commander: 3.5