My local gaming store always has a lot of Dice Masters boosters in stock, but I personally don’t know anyone who plays the game.  I’ve never seen anyone playing it at my local gaming shop either. 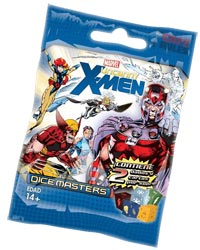 The game store store manager said they haven’t had a league in a while, but folks still buy the product.  And expansions keep showing up in their store.

Being an avid gamer, I was intrigued to finally try this game.  Many websites said that picking up a copy of either of the Teenage Mutant Ninja Turtles (TMNT) Box Sets was a good way to introduce yourself to the game.  There are two versions of TMNT Dice Masters Box Sets.  One came out in 2016, and then a different version came out in 2017.  Both have an MSRP of $34.99, but can usually be found at Amazon.com for a bit cheaper.

I love the Turtles.  I have some old Black & White copies of the original TMNT comics from the 80’s, so I figured I’d give a set a try.

I snagged a copy of the first TMNT Dice Masters – Dice Building Game (Pictured Above).  It says it has “everything two or four players need to play”.  Inside the box: You get 92 dice, 62 cards, 4 paper playmats, a rulebook and 4 Dice Bags.

Upon opening the box – the dice and the cards inside are gorgeous.  Card stock is great.  There are 3 different usable cards per character (ex: 3 different Raphael’s to pick from).  And each of the 16 character gets their own set of 3 custom dice.

The Dice Bags seem cheesy at first, but it appears they’re made of a Tyvek-like material, so they’re actually pretty darn sturdy.  They’re a bit small though.  They’re probably perfect for kids/teens/women, but they are a bit small for my man paws.

The playmats though are ridiculously small.  Anyone who regularly plays a Trading Card Game and hears the word “playmats” knows that playmats are usually are 2 feet wide and over a foot tall.  These so called “playmats” are about 4.7 inches by 4.7 inches.  Sorry, these are not playmats.  And these tiny playmats are just run of the mill paper stock, not the typical mouse pad material a gamer would be used to.

I sat down with one of my daughters, an experienced gamer, and we decided to learn this game at first from the rulebook.   And I have to say, this Rulebook is somewhat tough to follow.  The box might say “nickelodeon” on it, but this rulebook is not geared towards the 2-to-11 year-old demographic like nickelodeon is.

Typical Game Rulebooks vs. TMNT. The Turtles lose this match.

First off, this rulebook is just too tiny! The box is like 13×10, so they could have easily put in a full-sized gaming rulebook in the box, like most other game’s rulebooks.  This rulebook is the same size of those tiny “playmats”.  Then of course, they must use a tiny font to cram in all the rules.  The font here reminds me of something buried at the bottom of a Credit Card application form.  The rulebook is not laid out very logically either.  It’s kind of hard to sift through.  Information just seems in weird spots.  The rulebook just jumps into game play, without explaining what the dice and the cards do for you.  That is explained later in the book.

So, reading this tiny rulebook is a tough way to learn this game.  I am very surprised that Wizkids does not have a Tablet/SmartPhone App that walks you through the first few turns of a game.  Or even a simple example on their website.  The “How to Play” section on their website sends you to YouTube.  And I guess if you don’t have someone to teach you the game in person, that’s where you should really go.  My daughter and I simply gave up on the rulebook and eventually fired up YouTube to learn the game and to watch it played.

For those of you who don’t know how to play Dice Masters, “Let me explain …. No, there is too much. Let me sum up.” (yes … that’s a nod to the Princess Bride).

In Dice Masters, you are going into battle against your opponent – in this case The Turtles vs. the Turtle Villains.  You and your opponent have 20 life points each.  You win by reducing your opponent’s life points to zero … much like Magic: The Gathering.  You bring a squad of heroes with you.  All Heroes are represented by cool trading cards and by their fun, corresponding, colored dice. You have to recruit your heroes into the battlefield before they can help you.

You start off with 8 White Starter Dice.  They call these dice “Sidekick Dice”.  You put them all in your bag to start.  You pull out 4 dice, and you roll these dice.  These sidekick dice will either give you superhero energy to recruit your superheroes, or they will be playable sidekicks themselves.

This is essentially a bag-building game, where you try to build your bag with better and better dice to help you win.

I know I started out this review by bashing the rulebook/instruction book, but I must admit … now that I’ve learned the game … This Game is a lot fun!  The mechanics are fairly simple once you understand the basics.  Building your Dice Bags with lots of Hero Dice is a very cool gimmick in the game.  Rolling Dice is always fun. The artwork on the cards looks great.  The dice themselves look great.  The Turtles vs. Turtle Villains is a nice theme.  During the game, you can have Donatello and Splinter fighting against Bebop and Shredder.  That’s kind of cool for Turtle fans.  If you are an adult, I think this game is easy to teach younger children in person … once you learn the game that is!

Actual 24 inch x 13 inch playmat you can buy.  Much better than the tiny ones in the box.

The game box is also designed well.  It holds all your dice, your cards and your bags very nicely.  The box can hold 105 dice, allowing you to buy and store more dice.  It can probably even hold more dice and cards if you utilize the rest of the box compartments. 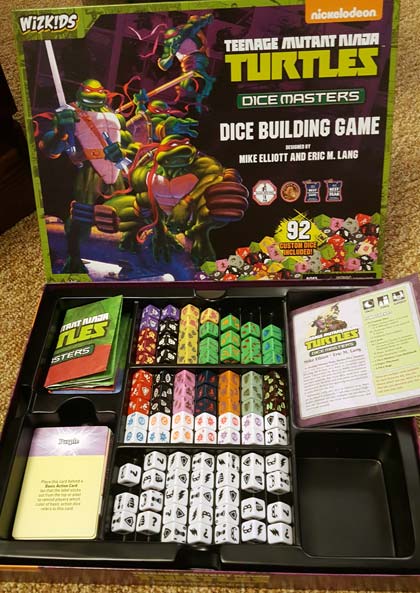 The card artwork choices are somewhat strange here.  You have a mixture of the original 80’s comic book art alongside the cartoon artwork. It’s fine, just somewhat odd.  The card stock is very nice quality, so no problem there.

To me, the dice bags are small.  There are better Official dice bags available online, but these aren’t quite as warranted as better playmats are in my opinion.  But they do have a coolness factor to them, and it’s easier to get your hands inside. 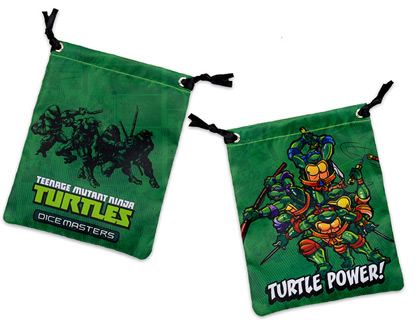 If you like this game, you don’t have to stop with the Turtles.  You can find Starter Decks and Booster packs for: “Marvel” 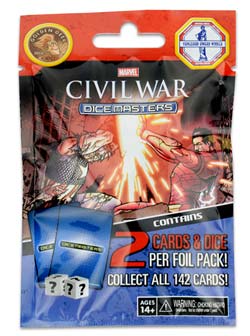 Heroes and Villains; “DC” Heroes and Villains, Dungeons and Dragons and even YuGiOh!  You can build your own squad and have Michelangelo fighting alongside Iron Man, Spider-Man, Superman and Batman.  You can have the Guardians of the Galaxy fight alongside Wonder Woman and The Flash.  Booster packs only cost 99 cents for 2 cards and 2 dice.

Again, this game is well-designed and a lot of fun.  Just don’t expect a grade school child to be able to teach this game to themselves, even if it does say “nickelodeon” on the box.  It’s nice that this is a fully enclosed set.  You don’t have to buy anything more to play the game, but the option to expand is out there.

I look forward to picking up some booster packs to expand my collection.