I am a video game sports fan. I’d say it’s the main reason I started playing console games.  I’m not always looking for “in the game” aspects.  In fact, I have become bored by those franchises where there is little innovation from year to year.

As for soccer, I’ve never played the sport and you’d have to bribe me watch it on TV (aside from some background World Cup action) but an arcade style, non-traditional soccer video game?  Yeah, gimme the sticks. (This is a review of the PS4 version)

“Street Power” mode is 1v1, first to 5 goals wins. 3v3 arcade style soccer…with mini nets.  There are power ups on the field that can increase your speed, slow your opponent, lock your goal, etc…yep, this is arcade style.

In “Trick Shot” the object is to hit as many targets as you can in the allotted time. This mode is fun once you get the hang of the shot meter and controls.

“Freestyle” mode reminded me of guitar hero, you’re not really performing the tricks as much as you are just repeating the pattern on buttons displayed on the screen.  This was my least favorite mode, reminded me of hacky sack…yeah, I’m an American if you couldn’t tell already.

“Panna” mode is 1v1, first to 5 points in a small octagon sized arena. You get 1 point for a goal and 2 points for a “panna”.  You can challenge your opponent to a Panna, which is a mini game of head 2 head guitar hero style button pattern, win the challenge and you have “nutmegged” your opponent for 2 points.

Finally, you have “Become King”, which is essentially the campaign mode.  You progress through the stages by winning matches and completing challenges in a rotation of all the game modes.

The game controls overall are responsive although there is the occasional phantom steal by the AI opponent.   The AI controlled players on your team are nearly worthless, they are never where you anticipate them being…sometimes just standing around.

The soundtrack is rather good, the songs and catchy and upbeat. Some old school tracks in there too.  My two daughters were dancing in their seats. 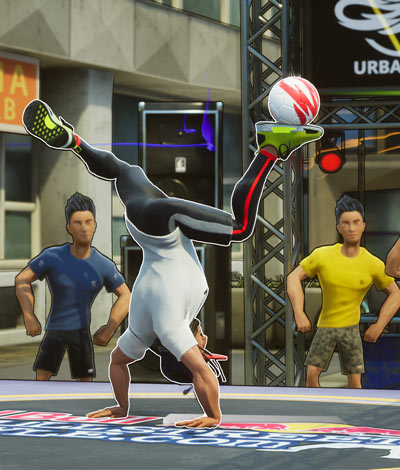 Overall, there are solid local single player modes to keep you busy.  Online multiplayer is there, however, there does not seem to be enough people playing this game at the time of his review as I could not find an opponent.  With 3 young kids in the house we prefer local co-op and local versus games any way and Street Power Soccer provides plenty of enjoyment.

Street Power Soccer is available now digitally and at retailers worldwide for PlayStation®4, Xbox One, Nintendo Switch and Steam. Own the streets and unleash your style in Street Power Soccer. All you need is a ball as you master insane tricks and share the flare of real street soccer legends in a competition that spans the globe through six different game modes, offering the style and diversity of street soccer competition.