10.16.00  Hello again. Sabrina’s Alakazam is today’s discussion. This is probably one of the most deadly psychic Pokemon, yet it poses as no threat to Wigglytuff alone. Making this card work good is difficult, but if you can get the right cards out, this card can be dangerous.

Sabrina’s Alakazam seems a little too slow to survive in the tournament environment, but when played right, it can really beat the heck out of your opponent.The Power of Psylink 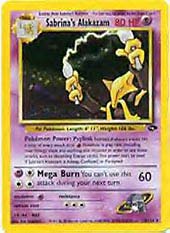 Sabrina’s Alakazam has a special Pokemon Power: Psylink. Psylink allows Sabrina’s Alakazam to use any attack of a psychic Pokemon in play. That’s nice, and makes you immediately think of some interesting things. If you get the right cards on your bench, you can give Alakazam 10+ useful attacks. Rocket’s Mewtwo, MP Mewtwo, Sabrina’s Abra, Sabrina’s Jynx and Sabrina’s Kadabra are just a few things that can make this card amazing. With those cards on the bench, Sabrina’s Alakazam always has many options, and becomes almost unstoppable. It has the ability then to absorb energy from the discard, draw cards, do massive damage, look at your opponent’s hand etc. Mega Burn (One Psychic, Three Colorless for 60) reads “You can’t use this attack during your next turn.” I’m guessing that means you couldn’t use another Alakazam’s Mega Burn, but that doesn’t really even matter, it’s way to hard to get one out, let alone two. Mega Burn with a PlusPower takes out the good stuff(Magmar, Electabuzz, Scyther etc.) and without it it can nail the Mewtwos and Hitmonchans for 120. If your opponent is playing defensive, you can Mega Burn, then copy Sabrina’s Jynx’s Helping Hand(Remove any amount of damage counters from one of your opponent’s Pokemon, then draw that many cards.) Not a bad idea, don’t you think? Psylink can also copy an accumulating Meditate.

Sounds Great- What Stops it?

Unfortunately, the three most popular decks have advantages over a deck with Sabrina’s Alakazam.

The first deck is Trapper. Believe it or not, it’s standard Haymakers that beat Trappers more than anything. The reason Trapper should shut a deck like this down is, they are evolution cards, which when drawn after your hand was destroyed, won’t do anything. There will probably be more energy than normal decks(as Sabrina’s Alakazam requires four to attack), which increases your chance of drawing a mere energy(although this can help), and more importantly: decreases your chance of drawing the Oak or Bill(you won’t max out on Oaks in a Sabrina’s Alakazam deck, it normally wouldn’t be worth it).

The second deck that has a large advantage over a Sabrina’s Alakazam deck is Wigglytuff. Wigglytuff is a Stage 1 evolution and is played fast. Wigglytuff’s speed and it’s killer resistance to psychic will shut down Sabrina’s Alakazam quickly, and it poor Abra probably won’t have time to evolve. It won’t stand a chance.

Last are Haymaker variants. The speed will normally beat the Alakazam.

Her Abras aren’t bad, she has three.

Sabrina’s Abra Level 18: I believe this to be her best Abra. It has one retreat, weakness to psychic, One Psychic looks at your opponent hand, which can be useful, although I think Quick Attack is what makes it a good card. With heads and a PlusPower, this attack takes down MP Mewtwo, Rocket’s Mewtwo, Hitmonchan and Rocket’s Hitmonchan with one attack. Nice. It’s Quick Attack has Haymaker-like qualities. I’d rate is a 7.0.

Sabrina’s Abra Level 12: This Abra was released with different art in Nintendo Power. 40HP, Colorless for 10, then one psychic and one colorless does 40, but can only be used if Abra and the Defending Pokemon have the same amount of energy cards attached to them. It can knock out a Mewtwo with two energy, this is where Energy Removal can come in handy, although no one likes using Energy Removal on something they’re going to knock out. It can do 40 to the built Buzz, also, but it’s just so fragile. I’d rate it a 4.5.

Sabrina’s Abra Level 17: Her last Abra has 40HP and one psychic does 20, and you return a psychic energy to your hand attached to Abra. Not terrible, but not worth it, bringing one psychic back to your hand mostly is more of a disadvantage then benefit, unless you accept the fact that your Abra is getting knocked out- then you saved an energy. (But does it really matter?) This is her only free reteating Abra, however. I’d give it a 3.5. One energy for 20 isn’t bad.

Most of you are familiar with her Kadabra. 70HP, one Psychic: Lifedrain(heads puts damage counters on the Defending Pokï¿½mon so it has remaining HP of 10.) One Psychic, two colorless does 30. Retreat of one. That’s not too bad either. 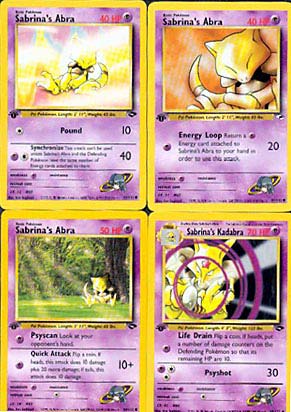 How to Play Sabrina’s Alakazam to Your Advantage

If you do manage to get a built Zam out, then try to get a No Removal Gym in play, cause something with 4 energy is just asking to be supered. Build other Pokï¿½mon too, and be ready incase it gets knocked out to have backup. Goop Gas slows it down, watch out for it.

My Rating (1- Almost completely useless, 5- Average, 10-Totally broken)
The Alakazam isn’t bad, but I don’t think it’s good enough to become a popular archetype. Psylink is just amazing though. I’d give it a 7.5.
~Jason Klaczynski