You will not believe the prices that old Pokemon Booster Boxes are selling for! 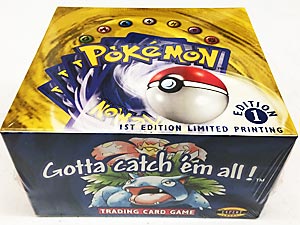 I have been playing and collecting Trading Card Games (TCG’s) since the mid-1990’s.  I started playing Magic: The Gathering (MTG) in 1996.  I remember seeing a Black Lotus card from MTG at my local game store selling for $300.  I still remember thinking $300 for a single card was crazy!

While playing in a large MTG Tournament in January 1999, representatives of Wizards of the Coast were demonstrating their new Pokemon Trading Card Game.  I played the demo, and enjoyed it.  The Base Set of Pokemon had just been released.  My kids and I had been playing the Pokemon Red/Blue games on the old B&W GameBoys, so I picked up some booster packs to teach them a TCG.  Booster packs sold for $3.29 each back then.  And Booster Boxes of the Base Set retailed for about $118.  The real Pokemon Craze started in the Spring/Summer of 1999, about 2-3 months later.

Cut to 2020 and Pokemon still has legs!  There are a lot of Pokemon Collectors/Investors with money to burn.  And there a lot of readers out there sitting on small fortunes.

There were a lot of moms & dads playing in Pokemon Tournaments with their children in 1999/2000.  Some parents would buy two boxes of Pokemon cards: One box of Pokemon cards to open with their kids; And another box stored away for a rainy day.   Well, that rainy just might be here for them!

One particular parent I know would always but 2 Pokemon Booster Boxes when they hit stores.  He would give his kids a pack a day if his kids had good days at school.  Luckily (or unluckily) this was a rare occurrence for him and his kids.  And now, he has some unopened old booster boxes still sitting in his closet.

I’ve been scouring eBay lately, looking at past sales of Pokemon Booster Boxes, and basically freaking out.  There are over two dozen Pokemon booster box expansions selling for more than $3000 each!

So without further adieu, let’s have a look at Crazy Pokemon Booster Box Prices!

Note: When i mention single card values in the article, I’m specifically mentioning cards graded Gem-Mint by an Independent Grading Service.  Card Prices and Booster prices are based on Actual eBay Sales in the United States!

Pokemon Base Set Unlimited Edition, 1999 – $8,500  If you can’t afford $50k for a 1st edition base set box, I guess you go for the next best thing.  Wizards of the Coast printed a limited supply of First Edition Base Set Pokemon Cards.  The unlimited edition cards came out immediately after 1st Edition sold out.  All the cards in this box are same as the cards in the 1st edition box, except that they lack 1st Edition symbols.  This booster box sold for $9,325 in August 2019.  Gem Mint Charizards in this box can sell for $2500 each.

Pokemon Skyridge 2003 – $15,995  It’s funny how one rare card can essentially make the price of a booster box skyrocket in value.  What’s the one rare card in this one?  You guessed it … another Charizard!  This time it’s Crystal Holo Charizard.  A Pristine “10” Crystal Holo Charizard sold for $9000 in April 2020.  This helps these boosters boxes sell in the $15,000 price range.  That makes each booster pack in this expansion worth about $400 each!  Crystal Ho-oh is in here as well, which can sell for about $2,700.

Pokemon 1st Edition Neo Destiny Booster Box, 2002 – $8,299  You would think that boosters like Jungle or Fossil would be here next, but they’re further down the list.  1st Edition Shining Charizards from Neo Destiny can sell for $6000.  Shining Mewtwo can fetch $1300.  There’s also Shining Raichu, Shining Kabutops, Shining Steelix, Shining Celebi and Shining Tyranitar.  This box has quite a few good cards inside.  A PSA 10 Shining Charizard sold for $10,000 in May 2020.

Pokemon Legendary Collection Booster Box, 2002 – $9,050 – Some folks call this Base Set 3.  The Legendary Collection was a 100 card set that featured cards from Base Set, Jungle, Fossil and Team Rocket.  There was no “1st Edition” version of this set.  The set contains Reverse Holographic cards and Box Toppers.  Reverse Foil Charizards from this expansion can sell for over $4,000.  The other reverse foils like Blastoise and Venusaur can sell for over $500 each as well.

Pokemon Jungle 1st Edition Booster Box, 1999 – $7500 – This was the 2nd Pokemon set printed in the U.S.   Even though this is an older expansion, there are quite a few of these available for purchase on eBay.  Basically, all holofoil rares from this box can sell for hundreds of dollars in this expansion if graded high.  Vaporeon, Snorlax and Kangaskhan both can go for over $2000 in PSA 10.  The Unlimited edition booster box sells for about $3200.

Pokemon EX Team Magma vs Team Aqua Booster Box, 2004 – $3,300 – Not quite sure why this booster set goes for so much.  Maybe supply and demand?  I have a feeling there is a lower population of these boxes on the market.  There are not a lot of high value collector’s cards in the set.  The PSA 10’s go for $200-$400 with Entei in the highest demand.

Pokemon Fossil 1st Edition Booster Box, 1999 – $7900 – This was the 3rd set released in the United States (After the Base Set and Jungle).  In May 2020 these were selling for about $8,000 a box.  The hot collector cards in this set are Lapras, Dragonite, Aerodactyl, Zapdos, Moltres, Gengar, Articuno and Raichu.

Pokemon Delta Species Booster Box, 1999 – $4500 – Two cards from this expansion recently sold for $3,000 each on Ebay: Gold Star Metagross, and Gold Star Delta Charizard.  I have not seen a Booster Box actually sell recently.  In May 2020, there was only one box for sale on Ebay, and it was listed for $15,000.  We’ll have to wait for a sale though.  Individual Booster packs sell for about $125 each though.

Pokemon Gym Heroes 1st Edition Booster Box, 2000 – $7800 – There are quite a few of these for sale on eBay.  Chase cards: Erika’s Vileplume, Misty’s Seadra, Erika’s Dragonair, Sabrina’s Gengar, and Rocket’s Scyther are the best of the bunch, bringing in over $200 each in mint form.

Pokemon ex Crystal Guardians Booster Box, 2006 – $6200 – One of the newer sets on this list.  If you consider something 14 years old “newer”.  This value is pushed up by yet another “hot” Charizard card! EX Charizard Reverse Holofoils sell for up $700 in gem mint condition.  There’s also a Gold Star Celebi that can sell for over $500 as well.

Pokemon EX Fire Red Leaf Green 2004 – $4599 – What makes this set valuable?  Having the original Red & Green starting Pokemon in it … in ex holofoil form.  Charizard ex, Venusaur ex and Blastoise ex can all fetch a pretty penny.  Charizard is the key card though, like usual.  This box sold for $4.6K in April 2020

So there you have it.  These prices are crazy!  Will these cards boxes hold their value?  Or will Pokemon card prices go the way of Beanie Babies in the 1990’s?  Should you sell yours now?  Should you buy some as an investment?  Who knows?  These are tough questions to answer.  If you need some money now, by all means .. Sell! Sell! Sell!  If you are financially well off, maybe sit on these a few more years.