PSA is essentially the OG of card grading.  They are the most popular grading company, and their red & white labels are the most recognizable.  And now they have suspended new submissions for at least the next 3 months! 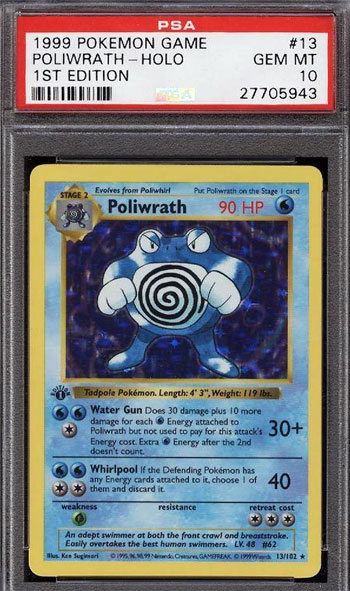 During these troubling COVID times, people found a new passion – getting new cards graded, and flipping them for profit.  PSA 10’s are hot, and everyone and their grandmamas have been sending cards to PSA get them graded. Over the last year, PSA has gotten overwhelmed with card submissions.  They are buried in a mountain of cards of to grade, and they can’t catch up.  PSA tried doubling prices on March 1, 2021 in event to slow the submittals down, but that did nothing to stem the tide.

Steve Sloan, the President of PSA of PSA made this announcement late last night:

“The sheer volume of orders that PSA received in early March has fundamentally changed our ability to service the hobby. The reality is that we recently received more cards in three days than we did during the previous three months. Even after the surge, submissions continue at never-before-seen levels.

Effective immediately, PSA is temporarily suspending our Value, Regular and Express service levels. This will allow us to fully unbox and receive the recent surge of orders and focus on our most impacted service lines.

We will take a tiered approach to reintroducing these service levels. Our goal is to bring all suspended service levels back by July 1, 2021.

Collectors Club members will have their memberships automatically extended to match the duration of the Value suspension. This extension will ensure existing members have 12 full months to utilize their annual Collectors Club benefits.”

Where does that leave us?

The only PSA option available right now is: SUPER EXPRESS, which is $300/card.  Ouch!

So, you basically have 3 few options now for card grading:

Who else is out there?

These are the heavy hitters.  New companies are invading this space as well like HGA, GMA, SGC, etc.

If all things were equal, I would continue to use PSA. I was able to look at my personal collection of cards and essentially know what a PSA 7, 8, 9 and 10 were – for the most part.  But all things are not equal.

I have tried CGC a few times, and I really like their holders, labels, pricing and turnaround times.  But I think CGC grades a little harsher than PSA does.  Many other folks on various forums and message boards feel the same way.

That is not to say grading harsher is a bad thing, it might actually be a good thing.  But many eBay buyers have not caught on to this subtle difference yet.  For the most part, a PSA 9 will sell for more than a CGC 9.  And a CGC 8.5 might actually be a PSA 9.  And a CGC 9.5 might be a PSA 10.  Hopefully this will change in the near future as more and more people try other grading companies.

If you know your card will not get a PSA 10, then I would definitely send it CGC or someone else that is less expensive to get that card graded.  If I have have a a Base Set Pokemon card that I think will grade around 6.0, I’ll send it to a faster/cheaper grading company.  The eBay sales difference between PSA 6 and CGC 6 will be pretty much negligible in medium grade.  I would get that puppy graded ASAP and toss it on eBay.

I have actually done this recently with some older NBA cards I have had sitting around.  I have some old Larry Bird and Magic Johnson cards that I know will get PSA 4’s or 5’s.  So, I just sent those to CSG to get them graded and slabbed for about $7 each (with membership).

If you are a card flipper, you probably can’t afford to wait a year.  You should give someone else a try.  The smaller grading companies really a chance to shine right now.  But will they be able to keep up with the higher demand they will undoubtedly see?  Or will they fall behind even more just like PSA?

If you are going to try a new company, I suggest doing it real soon.  It’s going to get very busy, very quickly!