Looking to unlock the powers of Ho-Oh, Marshdow or Necrozma in your Pokemon TCG Decks? Look no further than the Mysterious Powers Tins. 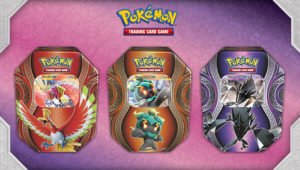 Launched October 20th (or earlier depending on if you ordered from www.pokemoncenter.com), these tins help power up the Pokemon Players decks with some powerful Pokemon.

Let’s take a look at each promo and how to integrate them into your TCG Decks: 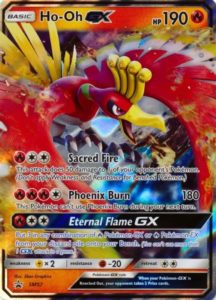 Remember how awesome Ho-Oh was back in Gold, Silver and Crystal? Well, the TCG has brought Ho-oh into the Sun and Moon era with some cool effects. Starting off in these Mysterious Powers Tins, this is a basic Pokemon, meaning you don’t need to evolve it like most powerful GX Pokemon. With 190HP, this Pokemon can take a few beefy hits, especially against Fighting Pokemon with a -20 resistance. It does have a weakness to Electric Pokemon (x2), but the good thing about it being a Fire Pokemon, you are more than likely to run it in a Fire Pokemon deck which normally only has weakness to Water Pokemon, giving you a better spread of countering Water decks.

Sacred Fire (1 Fire and 2 Colorless Energy) – A good sniping move as you get to choose which of your opponent’s Pokemon get the damage.

Phoenix Burn (3 Fire and 1 Colorless Energy) – The main attack of Ho-Oh causing a huge 180 damage which should be able to take out a lot of Pokemon in one hit. Just remember you can’t use it again until the following turn after it hasn’t been used.

Eternal Flame GX (1 Fire and 2 Colorless Energy) – Need a Fire GX or EX Pokemon from your discard pile? Ho-Oh’s Eternal Flame will grab up to 3 to put on the bench for you. 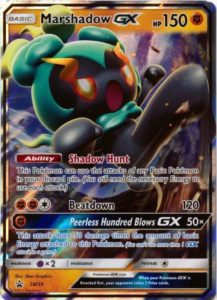 Our newest legendary, Marshadow joins the TCG with Marshadow GX. The cute little Ghost-Fighting Pokemon comes with 150 HP and a weakness to Psychic (x2). That seems a bit weak, but let’s get to its moveset:

Ability: Shadow Hunt – Being able to use a wide variety of Basic Pokemon attacks is cool (of course you still need the correct energy). Getting the Basic Pokemon in the graveyard is easy with cards like Ultra Ball.

Beatdown (2 Fighting and 1 Colorless Energy) – A basic 120 damage attack. The cost is a bit high for it, but unlike Ho-Oh, you can use it each turn.

Peerless Hundred Blows GX (1 Fighting Energy) – Depending on how many energy you like to give to Marshadow, this can become a 1 hit KO attack! Just make sure to decide when is the most appropriate time to use it during your game as you only get to use it once. 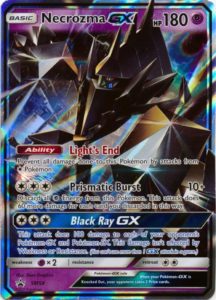 The mysterious Pokemon you meet after catching the Ultra Beasts and Sun and Moon, Necrozma joins the TCG with Necrozma GX. Being in the middle of Ho-Oh and Marshadow in HP (at 180) and sharing Marshadow’s weakness to Psychic makes for an interesting card. Let’s check its moveset:

Prismatic Burst – A discard attack isn’t the greatest in this format. Depending on how many Psychic Energies you ditch can make this a huge attack, but still, you lose all of that energy.

Black Ray GX – To make up for it’s ability and so-so attack, this GX attack can wreck your opponent’s GX and EX Pokemon. It does only do 100 damage to each, but that sets up your other Pokemon to take the kill.

Overall 3 powerful Pokemon in 3 awesome tins! Get a bit of a discount on Amazon on these tins: