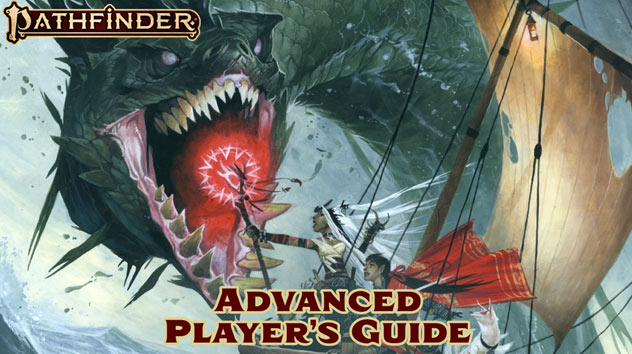 Ready to go beyond the basics? Expand the limits of what’s possible with the Pathfinder Advanced Player’s Guide! This 272-page Pathfinder Second Edition rulebook contains exciting new rules options for player characters, adding even more depth of choice to your Pathfinder game! Inside you will find brand new ancestries, heritages, and four new classes: the shrewd investigator, the mysterious oracle, the daring swashbuckler, and the hex-slinging witch! The Advanced Player’s Guide also includes exciting new options for all your favorite Core Rulebook classes and tons of new backgrounds, general feats, spells, items, and 40 flexible archetypes to customize your play experience even further!

It’s not always what you know, but who you know! The heroes of the Age of Lost Omens forge their path through an uncertain world, but that world has been shaped by many others who came before or who now stand beside them! Lost Omens: Legends provides details on 42 of the Inner Sea region’s biggest personalities, from queens and kings that rule the present to distant figures from Golarion’s past. Uncover details from the inner lives of movers and shakers from all around the globe, as well as the secret techniques, items, and knowledge PCs might gain from encountering these larger-than-life figures!

To learn all about Paizo at Gen Con Online, including online games with Paizo Organized Play, Paizo Twitch Channel interviews and seminars, a 20% off online store discount code, and much more, go to paizo.com/gencon.

Paizo’s Product Release Schedule can be found at paizo.com/releasedate.