Oyobi, Who Split the Heavens – Betrayers of Kamigawa

Oyobi is a fairly straightforward sort of spirit: cast things, get more things. It conveniently tells you what kinds of things it wants you to cast (Spirits and Arcane spells), and the reward is quite nice in terms of being able to crack open a game. The main downside is that Oyobi is a set-up piece that already costs seven mana; it does possess good toughness, but the deck seeking to split the heavens with her is already looking to drag things out nicely. It’s a fun card, and quite vicious in Limited if you build around it, but it’s never really panned out for the issue of taking too long to get going. Still, you can do worse, and if you’re here for more a fun time than a long time, Oyobi can make for an entertaining way to punish your opposition.

Constructed: 1.25
Casual: 3.5
Limited: 4.25 (can win games on its own, and that’s before you slough off an army of fliers)
Multiplayer: 3
Commander: 3.5 (weird to build around, but Spirits are already a competent tribe, and an entrenched Oyobi is a massive issue)

A neat tribal legendary creature for spirits that is way, way to expensive!  I can’t fathom a seven mana value creature in constructed that is not in a green ramp deck, the only reason this won’t work is because most spirits are white, blue, and black…not green.  If you were to get this out onto the field, it could push you forward towards winning the game but…and this is a big but…for seven mana you likely have none to spare and with all of the creature removal out there there is a good chance you’ll never play a spirit creature to use this ability.  It is a cute design but not much else, I would stay away from commander too, there’s just so many other good cards you could use instead of this.  You could build around this in limited but by the time you get this out do you really have enough spirits available to get the win?  By turn seven you either have the game or your opponent has a dominate board state and if they do a 3/6 creature won’t save you.

I’d be surprised if we saw a new version of Oyobi, or even much in the way of the “spiritcraft” mechanic in Kamigawa Neon Dynasty. Then again, I’m still kind of surprised we’re getting Kamigawa Neon Dynasty at all, so take my predictions with a grain of salt. It’s been an awfully long time since Oyobi came out, and we haven’t seen her set the world on fire in casual or Commander settings. That’s probably because she’s a very straightforward card with an eyebrow-raising mana cost. There are similar effects in later sets that are much more aggressive, so you probably wouldn’t be looking at Oyobi unless you think you need to grind out late-game scenarios with a Spirit tribal deck. Being mono-white limits your options severely if you’re using her as a commander, but she might have a role in multicolored tribal decks: when backed up by blue and/or black disruptive spells, she can multiply an army pretty well, and a bunch of 3/3 flyers is a threat even in Commander. 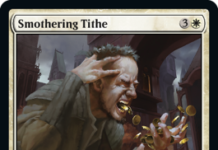