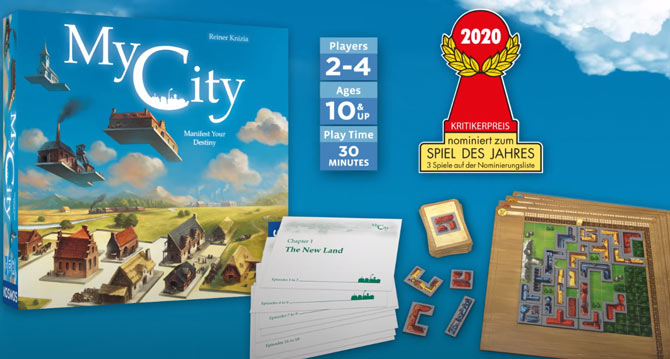 My City is a new family-friendly, “legacy style” board game from Thames & Kosmos.  My City is for 2-4 players, ages 10 & Up.  Gameplay only takes about 30 minutes per session.  My City was one of the 3 nominees for the coveted Spiel Des Jahres in 2020 – The German Game of the Year.

What is a Legacy Game?

A legacy game is a type of board game where the gameboard and gameplay change over the course of a series of gaming sessions.  This usually involves adding permanent stickers to the game board, introducing new mechanics, adding new cards, tearing up cards, etc.

My City is a polyomino type game.  The game might remind some players of Patchwork, Isle of Cats, Barenpark, Feast for Odin, etc.  In polyomino type board games, players usually have their own player boards and have to fit together tetris-like pieces as snugly as possible for points.

In My City, each player is given their own plot of land, and they are fitting building pieces onto the board in order to create their city.

How does My City play?

This game is pretty darn easy to learn and teach.  You give each player a Game Board, and then you start flipping over random Construction Cards.  Players then place that polyomino building token on their board.

In the first scenario, players cannot build in the forest or the mountains.  All players start with 10 points.  You get -1 point if you cover up any free standing trees in the light green area.  And you get -1 if didn’t cover up the boulders.  You also get -1 point for every light green space that remains on the board after all 24 construction cards are flipped over.  And you get -1 point for every construction card you didn’t (or couldn’t build) place on your board.

After all 24 construction cards are played, the game is over.  The winners are awarded Legacy points, but the winner may also be given a handicap for future games.  The losers don’t receive any Legacy points, but might be given a slight advantage in future games.   At the end of the first scenario, the winner gets 2 legacy points for the win (which they physically write on the board).  The winner is also given a boulder sticker to permanently place on their board as a handicap.  The losers get no points, but are given tree stickers to place on their boards to help them in future games.

In the second scenario, we were also awarded points for the number of “like-colored buildings touching each other”.  Each scenario builds off of previous scenarios.  The system is very cool.

There are 8 large sealed envelopes in the box.  The envelopes contain 3 scenarios each.  Thus, players will play through a total of 24 scenarios.  Each scenario will take approximately 30 minutes to play. 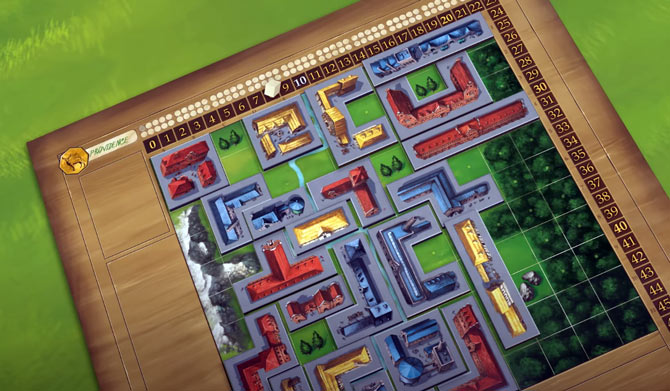 Likes, Dislikes and Final Thoughts on My City

My City games truly only take 30 minutes to play per scenario.  You can play one short filler game per session.  Or you could knock out an entire envelope of scenarios in 90 minutes.

I love that My City is easy to learn and teach.  One person can easily read the rules in 10 minutes, and then teach everyone how to play the game in about 5 minutes.  The 8-page rulebook is in full color, and is very well written.  The pieces, boards, and construction cards are all well made.

The legacy aspect and rebalancing of each game is a great idea.  Dad might win the first scenario, and he will get two points for his victory.  But Dad will have to put a permanent boulder sticker on his card to handicap him in the future.  Junior might be sad he lost the first scenario, but he will get to place a tree sticker on his board to help him catch up in the future.

It’s always fun to open sealed envelopes in Legacy games and learn what’s in store for you now.  It makes games very dynamic, and you don’t have the boredom you might experience from playing the exact same game over and over.

There is not too much to dislike here.  I could be nitpicky and say the game is too easy, but it really isn’t.  Each polyomino building you play requires thought.  One bad building placement might decimate an entire scenario for you.

Our gaming group of 4 players all gave My City a big thumbs up.  We have only played through the first two envelopes (6 scenarios) so far.  We are definitely coming back for more!  We will continue to play through more scenarios, and update our review if our opinions change over time.

My City is for close-knit families and friends.  You really want to play all 24 scenarios with the same 2-4 people.  Each player will keep their personal board for their entire adventure.

Some folks might be worried that they are not getting their money’s worth in Legacy Games.  But guess what, once you are done with the My City legacy scenarios, you can flip the board over and play “The Eternal Game”.  There are directions for playing a regular polyomino building game without stickers and scenarios.