Yeah, I know the picture that I found isn’t positioned properly, but it still has all the text on a card.

Anyways, Lucario VSTAR along with another Lucario-V card is going to be released via “Lucario VSTAR Premium Collection” on April 8, but I might as well cover this card just in case I forget. Looking at its attacks, they could be useful under the right situation. Fighting Knuckle costs FCC for 120 damage, plus 120 more damage if your opponent’s Active Pokemon is a Pokemon-V. Dealing 240 damage for three energies is very good, and the damage alone is enough to wipe out the majority of Basic Pokemon-V, though Pokemon VMAX and VSTAR has enough HP to survive at least one instance of Fighting Knuckle. In terms of energy acceleration, you’ve got Swampert and a DCE lookalike in Brillant Stars (can’t remember what it’s called, it’s not Twin Energy, and that new DCE reduces your damage output by 20) that can help you go from zero into attacking. Aura Star is another one of those “once-per-game” attacks that has to be carefully used. It costs FC and does 70 damage times the amount of Energy attached to all of your opponent’s Pokemon. You’ll need your opponent to have a total of five energies attached to their Pokemon in order to land an OHKO. Not easy, but manageable.

I’m certain that there would be a deck that features Lucario-V. Those attacks are too good to pass up and it can get even better in Expanded, where there’s a plethora of support such as Strong Energy and Diancie (*) to increase the damage output of Lucario’s attacks, eventually OHKOing Pokemon VSTAR. 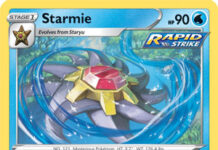