This was the very first Card of the Day ever posted on Pojo.com.  This was written by 3-time World Champion Jason Klaczynski on October 4, 2000.

10.14.00  Hi everyone, I finally have my own section. Everyday I’ll be discussing a card.  My firsts cards are are Lt. Surge’s Spearows, and also, his Fearow. We’re actually looking at 3 cards. 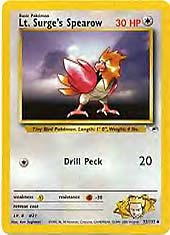 bad as it looks. Sure, it’s not great, but the one colorless for 20 can be useful at times, as well as the resistance can be, the zero retreat(send it out, draw, retreat it, just like you would with a Scyther), and probably it’s best feature is- anti Ditto! It can K.O. Ditto with a PlusPower. Ouch to Ditto. Even better is when Ditto takes 30 damage, and Spearow comes out, knocking out Ditto. A Simple Slash or Thunderpunch leaves Ditto threatened by it. This is even better than a Drill Peck since you haven’t attacked and still have your entire turn to take. It’s not always good to leave it benched to be Gusted, and it’s not really even good to bench it if you’re not going to use it this turn, unless you are Oaking and think it will be useful later, for example.

Scott Gerhardt had the idea of promo Eevee as a Ditto killer, Eevee’s advantage is that it can allow you to pointlessly search your deck when Jiggly evolves(common in tournament environment), and it’s resistant to psychic. It gives your opponent a lot of evolution cards to watch out for, although Eevee’s evolutions aren’t a big threat. Resistance to psychic aka Mewtwo can be useful. Spearow, however, has the resistance to fighting, and more importantly, isn’t weak to fighting, leaving out Jab to your sole Eevee losing the game. Thundershock is still possible for a knockout, but hey- it needs a PlusPower. (Overall since Buzz is more popular than Chan in tournament environments today, I think Eevee is the smallest amount better as a Ditto killer, although the factors are so small we might as well call it even.) I have talked more about Ditto than Spearow, that’s because Lt. Surge’s 30HP Spearow basically is useless except for it’s Ditto killing abilities. Don’t get me wrong though- Drill Peck can be useful! 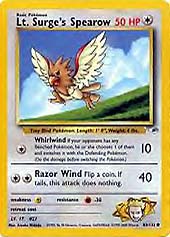 overall, it’s definitely better than his 30HP Spearow, because this one can actually fight. Two colorless, 50% chance of 40. Nice turn one attack, kind of risky since you can get it removed easily if you play it first turn and it’s 50%, but it’s better as a surpriser, than opener, most of the time. By surprise, I mean, play it like you would play a (oh, it’s back again) Ditto. Bench it the same turn you are using it for maximum effect. Buzz has 30, retreat the Scyther, colorless, Razor Wind. Risky, but if you don’t have many other options.. go for it! Whirlwind can be nice too when they have only one benched that doesn’t pose a threat(example: damaged, no energy) Sometimes you can let them attack with it so you can then knock it out(if it’s damaged), you exchanged prizes, but he lost the energy attachments per turn, since he put them on a Pokï¿½mon that just ended up getting knocked out. Whirlwind is seldomly significantly beneficial as almost everyone’s got the Scyther or a bigger threat on the bench.

Lt. Surge’s Fearow
His Fearow is interesting. 5 coin flips, averaging 20-30 for two colorless, not bad, but it’s attack that 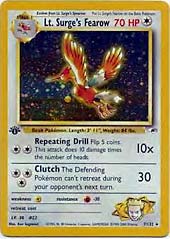 makes it different and interesting is Clutch. Can’t retreat next turn? Poor Scyther can’t take a hit and run. Once Clutched, Scyther faces knockout next turn from PlusPower/Vermilion City Gym/Lucky Repeated Drill (Scyther is an example, Clutch can stop Hitmonchan, Mewtwo, Ditto, and lots of things well). So Scoop Up and Switch need to help Scyther, that’s when you Lass or Sneak Attack your opponent- right before you do a nice Clutch. It’s weakness to lightning really hurts it, making Thunderpunch automatically fatal with a PlusPower.

Comments
So overall, is Lt. Surge’s Spearow/Fearow the next popular archetype? No. They are cards that are useful in the right situation. In a Fearow deck one 30 HP Spearow should show up as the Ditto killer.