Before you start reading, I just want to warn that this is probably one of my longest review that I have on a card.  If for some reason you are busy with something else, you can always bookmark it and come back to it later.

Hello readers! Vince here, and I’m about to review a card that I used to have but it is still fun to talk about.  That card is Kecleon from Platinum Rising Rival.  Yes, a card from about eight years ago is about to be explored.  Upon looking at the card, it may not seem much, but I think this card has some potential if I know what I’m doing.

Kecleon is a Colorless type, which won’t hit anything for weakness, but as we shall see, it is more than just a Colorless type.  Being a basic that doesn’t evolve is saving deck space by a lot.  70 HP is legal target for Level Ball, but the HP is quite low that weakness/resistance won’t matter much unless the opponent whiffs their setup.  Speaking about weakness, taking an extra 20 damage instead of x2 makes it slightly bulkier.  Fighting weakness still hurts, as it can hit hard for one energy and other buffs.  And finally, a retreat of one is good.

Now for why Kecleon is more than just a Colorless type, is due to its Colorful Body Poke-Body, which makes Kecleon become multiple types: Grass, Fire, Water, Lightning, Colorless, Fighting, Psychic, Dark, and Metal. Nine types! That does not include Dragon and Fairy due to this card being behind the times, but even with those two missing types, Dragon and Fairy can only hit BW-era and XY-era Dragon for weakness.  With those nine types, Kecleon enjoys type specific support among those nine types. So I’m about to make a detailed list of Expanded cards that will support Kecleon.  And believe me, this list is excruciating long, so if you don’t feel like reading them all, just keep scrolling down the review.  If I missed something, then I’ll update it later.

-Evoilite/Hard Charm: Cancels out fighting weakness while taking 20 less from others!  Still, competitive decks can hit for 100 or more, rendering the reduction pointless.

-Rocky Helmet/Rock Guard/Bursting Balloon: Punishes attackers into attacking Kecleon, though at 70 HP it isn’t hard to do.

-EXP share: gets a single energy from KOed active to itself, to help meet the three Colorless cost.

-Dark Patch/Aqua Patch: Can get from zero to attacking!

-Zoroark DEX: Kecleon will help Brutal Bash do 20 more because of being a dark type.

-Vileplume’s Allergy Panic quadruples weakness. You can find it in Ho-Oh decks in retail stores.

-Shadow Circle: Having a dark energy means no weakness!

-Focus Sash: Survives anything from attacks that will OHKO Kecleon! Might be better than damage boosting tools, as focus sash serves as an insurance for the Kecleon to survive once land 2 KOs before it goes down.

-Regirock EX/Machamp: Can help Kecleon do 10/20 more damage due to being Fighting type as well! 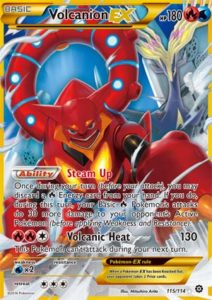 -Volcanion Steam Up: Helos Kecleon do 30 more damage times number of fire energy discarded due to using steam up Ability! With four uses of Steam up, triple smash with weakness will reach OHKO levels!

-Altar of the Sun: No weakness

-Altar of the Moon: reduced retreat cost if attached Dark or Psychic energy.

-Dangerous Energy: Punishes Pokémon-EX who try to attack by tacking on 20 damage. 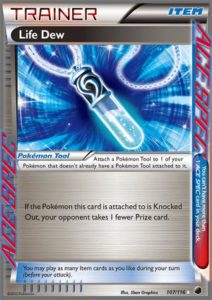 -Steel Shelter prevent status conditions for Metal Pokémon, which Kecleon is part of.

Whew, that is a long list to talk about type related benefits as well as Kecleon helping them (about 50+ cards), and not all of them sees play!  Unfortunately some cards mentioned above and other unmentioned hindering card’s may also backfire on Kecleon, namely opposing Aether Paradise, opposing Altar of the Sun, Parallel City (forest side will make grass, fire, and water Pokémon do 20 less damage), M Rayquaza EX Dragon (Delta Wild will resist grass, fire, water, and lightning by 20), Pyroar (blocks damage from Basic Pokémon), Jolteon EX’s Flash Ray also prevents damage from Basic Pokémon and is already an OHKO on Kecleon, and Araquanid (prevents damage from fire Pokémon, which Kecleon is part of).

So being nearly every single type seem fun and all, but none of that would really matter if it has bad attacks, and indeed, it has a bad attack.  For Kecleon, however, because of Colorful Body and other Pokémon that I’m about to mention, this attack is actually decent!  Triple Smash cost CCC and it does 10 damage and requires three coin flips so that it does another 20 damage for each heads. Again, Dimension Valley will make it CC instead.

So Victini is definitely a good partner for Kecleon.  Another partner is Vileplume from BW Boundaries Crossed. It’s ability QUADRUPLES the weakness instead of double.  So triple Smash could do 40, 120, 200, or 280 damage depending on how lucky your coin flips are, and that’s even before factoring damage buffs before applying weakness!  With a Strong Energy, Muscle Band, and Professor Kukui/Giovanni’s Scheme, you are already OHKOing anything in the game (minus Wailord EX with Fighting Fury Belt) without needing to flip a coin (10+20+20+20)x(4)=(280)!  Wow! The power of X4 weakness is staggering!

Another partner would be Volcanion-EX.  You may not enjoy the X4 weakness, but using four steam ups will get Triple Smash doing 130 damage before coin flips, which you don’t need because 130 with weakness is reaching “OHKO anything” territory (again, except Wailord EX with FFB).  Victini is there for retrying coin flips and no evolutionary line or strong energy is needed.  You need recovery options, however, if you need to repeat Steam Up usage. Fisherman, Energy Retrieval, etc. will help you use it again.

So after all being said about some uber-combotastic strategies, let me stress that Kecleon is not as invincible as the review suggest, but it comes pretty damn close.  70 HP is very low to the point that any competitive deck would be able to shoot for OHKOs without brining too many resources.  Triple Smash’s failing coin flips can bring to a halt.  Shutting down abilities (not Colorful Body), will stop the nightmare of boosting the damage output such as Steam Up, Allergy Panic, or any other ability that’s designed to support Kecleon.  Fighting Pokémon will make quick work against Kecleon.  Kecleon may excel against EX/GXs for prize trade, but will struggle against Garbodor and Greninja decks.  Also, since it can’t hit dragons as hard, Noivern-GX is anticipated to be a threat for Kecleon, as item lock hurts as well as 50 damage which it could be boosted even further.

In Standard, Kecleon will be welcomed by Volcanion EX and Rainbow Road Xerneas decks. In Expanded, we additionally got Vileplume to spice things up as well as Blacksmith for acceleration. Sadly for limited, the Rising Rivals set doesn’t have any crazy speedy strategy to quickly use Triple Smash, and opposing weakness is +10, +20, and +30, limiting the damage’s effectiveness.

To finish this review off, this is a special rotated review.  If this card were to be reprinted, Kecleon would be fun to use that can fit into many decks that not people will expect.  Nothing is perfect there, but if you play to its strengths, then the payoff will be great.

If fact, there is another Kecleon card in SM Celestial Storm that is similar to this card. It is a Basic Colorless Type with 80 HP, weak to Fighting, and a retreat cost of one. It’s ability, Unit Color 2, states that as long as this Pokémon has Unit Energy LPM attaches to it, it is also a Lightning, Psychic, and Metal Type, which allows Kecleon to hit a variety of Pokémon for weakness, as well as providing 90 more damage for Rainbow Road variants. Slash does 80 for CCC, which is barely adequate; damage boosting items may help achieve certain numbers. With Choice Band, it can OHKO Buzzwole-GX, Lucario-GX, and Glaceon-GX. As good as it sounds, I still wouldn’t rely on using Kecleon too much.

Notes: Why am I scoring this high?!  I believe some decks will do some adjustments in deck building in order to address/overcome some of Kecleon’s shortcomings so that Kecleon can continue wrecking shop.  Even without other Pokémon helping Kecleon, Kecleon is a good self-serving attacker with the help of some Trainer and Energy cards.  I might or might not have mentioned it before, but on the same turn, using Blacksmith, plus manual Strong Energy, and attaching the Muscle Band tool card, Triple Smash will start with 50 and depending on the flips, will be 70, 90, or 110 damage before factoring weakness.  220 damage without help is insane, only Stage 2 GXs and some Mega Evolutions barely survive (unless Fighting Stadium is present).

I just want to address that creative decks can pick up a surprise win here or there, but most of the time, creativity is trumped by decks that define the metagame to the point where you use cards to counter them or use said meta decks to go toe-to-toe with them.  Just look at Ross Cawthon. His deck, “The Truth”, was a rogue and creative deck that uses some Pokémon that you don’t normally see being used (Suicune and Entei Legend and Blissey Prime), and that brought him to the runner-up position in 2011 worlds Masters Division.  I can hope that once in a while that I stray away from frequently used Pokémon and use other lesser known Pokémon and try to play to its strength.