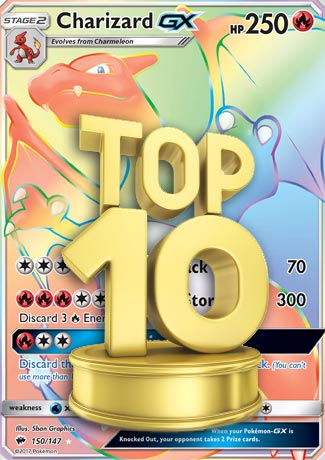 One of the things we enjoy here at Pojo.com is counting down lists of cards. While we didn’t start out doing such countdowns, they nearly go back to the beginning of the website in one form or another, even when the only regular contributor was Jason “Ness” Klaczynski. What was once a rare occurrence became a year occurrence and now is a regular occurrence, as we have three major different kinds of countdowns per year for

We usually aim for 10 cards, which is two week’s worth of our Card of the Day reviews. Sometimes there won’t be enough time or cards to justify that long of a list, so we’ll do less like a Top 3 or Top 5 countdown, and when we have both enough time and worthwhile cards, we’ll something larger: I believe “Top 20 cards lost to Rotation” is the current record holder.  The Pokémon section of the site switched to reviewing seven days per week, so we’ve seen an increase in “Top 15” lists, the countdown beginning on the Friday on which most Pokémon sets release.

The reason we began doing these lists was to ensure we had covered the best, most important cards at least once… and because it is fun. The way we do it in the present is that all Card of the Day Reviewers who wish may submit their own, personal top cards list. We try to give the reviewers quite a bit of freedom in this; regardless of what size of list we’re aiming for, contributors can submit a shorter or longer list.  From experience, however, I’m pretty sure that a Top 10 countdown shouldn’t be built with anything larger than a Top 25 submission.  For all lists, it is normally one card per entry; exceptions are granted for cards that feel redundant to review separately.  This can be because they have very similar effects or because they are in some other way related.

For yearly or expansion based countdowns, reprints are ineligible barring special circumstances e.g. it is not only a really good card but the reprint makes it once again legal for Pokémon’s Standard Format.*  Reprints are usually ineligible, to avoid the same card winning year after year just because the company behind a game realizes it is a good idea for such cards to be readily available to players.  We typically want to focus on the latest cards.  The exception occurs when a reprint is for some reason significant.  In Pokémon, this usually means something not only being good enough to make the list, but being a reprint of something that hasn’t been Standard-legal for some time.  Another reason might be if something had been banned from Standard Format play, but was recently removed from the Banned List.  Countdowns based on cards lost to set rotation don’t have to worry about this, but they do have to worry about cards we know are about to be reprinted.

Each contributor’s list is submitted to a member of the team in charge of scheduling.  Often this is Pojo himself, but sometimes it is another reviewer (like myself).  When I do it, I enter all the individual lists into a spreadsheet and then assign “voting points” to each individual entry based on its ranking: this can vary depending upon how many cards are on the lists and/or how many are actually slated for reviews. Cards that show up on multiple lists then have their voting points totaled, and the new list is organized from what received the most voting points to what received the least. This can lead to ties, however, and that calls for tiebreakers.

I cannot speak for Pojo, but I handle ties in a few different ways.  If neither card involved in a tie made my list, I break the tie manually, based on which card I think is better.  Otherwise, I look at which card appeared on more lists.  If that is the same, then I either flip a coin or roll a die.Currently, if it is a tie between two cards and neither made my personal top 10, I break the tie according to which I think is better. This doesn’t happen all that often; usually one or both cards made my own personal list, in part because I like to submit extra long lists for just such reasons.

You’ll notice I haven’t said anything about being a deck’s focus, being general use, winning events, etc. That is because we leave such considerations to the discretion of the individual reviewer. Besides wanting to enjoy the process, it is also very difficult to properly qualify and quantify these things. Should a card that is useful – but not vital – for most decks rank higher or lower than a card that is vital to a particular, successful archetype? What about how a card’s performance varies throughout the year?  That’s for cards that are already proven, like in yearly countdowns.  With new cards, it boils down to speculation… and maybe how they’ve performed in Japan (for games where Japan receives new cards first).  In the end, it just works out better for that reviewer to decide what qualifies a card for their list.

I hope that explains how we compile our countdown lists, and that this helps you enjoy them more.

*For those unfamiliar with Pokémon, each year, usually in August or September, there is a day in which the oldest sets (and all cards within them) stop being legal for the default tournament format, the Standard Format.  This is referred to as “set rotation”.  Typically, this number of sets rotated covers three to five quarterly set releases.  New releases typically become legal the third Friday of that month.  If a card that has previously rotated out receives a reprint in a newer release, all copies become Standard legal unless there are significant differences in the card’s text.