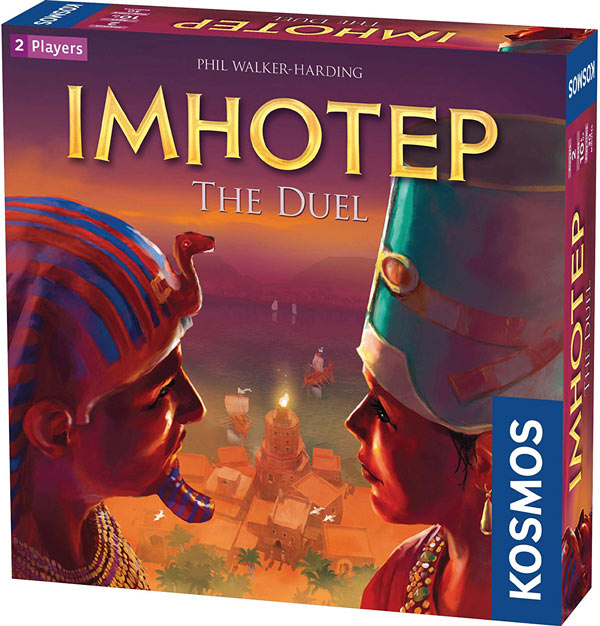 Imhotep: The Duel is a new 2-Player board game from Kosmos Games.  The original “Imhotep: Builder of Egypt” board game was released in 2016 and was nominated for the coveted Spiel Des Jahres Award (which is kind of like the Academy Awards for Board Games).

We are big fans of the original Imhotep board game (as well as the expansion A New Dynasty).  We enjoy those games so much, we bought the Imhotep playmat at GenCon one year for our gaming table.

What / Who is Imhotep?

According to Wikipedia: Imhotep (27th century BC) was an Egyptian chancellor to the pharaoh Djoser, probable architect of the Djoser’s step pyramid, and high priest of the sun god Ra at Heliopolis.

In the Board Game, you take on the roles of Egyptian Architects and assist in the building of Pyramids, Obelisks, Tombs and more.

The Original Imhotep board game (Builder of Egypt) is for 2-4 players.  And players use wooden cubes (representing stones) to build 3 dimensional pyramids and other structures.  The players share in building a common city using stones from all players. Each player has their own stones that they load ‘turn by turn’ onto varying ships, and players then send those stone-ships to the Pyramids, Obelisks, Temple and Burial Chambers and unload them. Players score points based on how many stones they contributed to various monuments.  There is a little more to it, but that is the gist of the game.

The original Imhotep is extremely easy to learn, teach and play. You basically only have a few choices on your turn:

The strategy is to try to score more points than your opponent by placing your stones in varying places on the boats, knowing which boats to place them on, knowing when is a good time to sail a boat, and determining the best monument to sail that boat to.  Example: It’s your turn, and your opponents might be loading a large boat, and they are obviously trying to get to a taller Obelisk than you, so you might use your turn to sail their ship of stones to the Pyramids or Burial Chambers instead. You might not have any stones on that particular boat, but you have the tallest Obelisk, and you want to keep it that way.

The original Imhotep board game is simple and easy, but requires planning, cunning and sometimes ruthlessness!  It’s a brilliant game.

What is Imhotep: The Duel?

Imhotep: The Duel is for 2 players only, and based off the original.  The original Imhotep board game can be played two players as well, and actually plays very well with just two players.  I guess for “The Duel“, the designers were looking for a lighter version or a travel version?

The wooden stones have been replaced with 2 dimensional cardboard tokens.  And each player now builds their own individual kingdoms, instead of a common group kingdom.

The ships’ cargos are more than simple stones in The Duel.  The Cargo are dedicated Obelisk pieces, Pyramid pieces, Temple pieces, Tomb Pieces, and Action Tiles.

And 1 Harbor Board – the game board (with 1 reserve space, 9 harbor spaces, and 6 moorings)

How to play Imhotep: The Duel

Here is a brief overview of gameplay.  The goal of The Duel is to score more points than your opponent by building a better city consisting of Tombs, Pyramids, Obelisks and Temples.

The Cargo Ships are randomly filled with Cargo Tokens for each structure.  There are also Action Tokens that don’t help you build structures immediately, but can help you take bonus actions on future turns.

Similar to the original game, you only have simple choices to make during your turn:

That’s it. Turns are as simple as that.  The strategy and difficulty come in the form of determining which choice is best for scoring points?

You do not ship boats to structures like you do in the original game – Instead, ships are simply unloaded.  A player can unload a boat in a “row” or “column” as long as there are two or more Meeples in that row or column.  And those Meeples do not have to be your own, there just needs to be two or more Meeples of any color.

Looking at this image again: 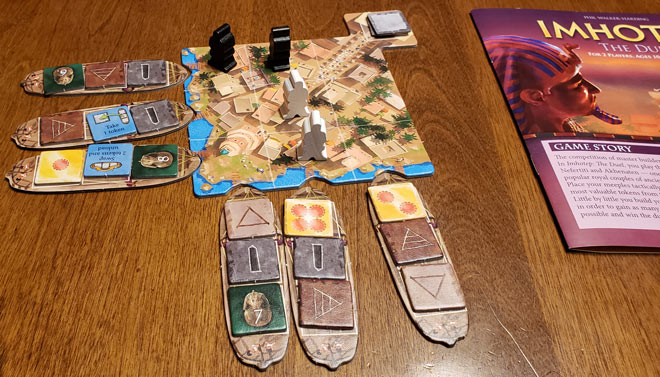 If it was your turn, and you were black, you could:

If you decide to unload a boat, then all the meeples in that row or column on the tic-tac-toe board are removed from the board and returned to their owners, and the Ship’s Cargo is refilled with tiles from the Supply pile.

Play continues until you can’t load more tiles onto a ship.  If a ship is empty it is removed from play.  When only one ship remains, the game is over.

Each site board will tell you how to score your tiles.  If you have more points than your opponent, then you win the game.  It is very simple to add up the final scores with a pen and paper.

Final Thoughts on Imhotep: The Duel

This is nice little two player game.  It is incredibly easy to teach.  It plays quickly and offers a decent amount of strategy.  Luck is only slightly apparent in this game.  Your strategies are not ruined by luck, they are ruined by your opponent and you have to do your best to plan for that.

If you like the gameplay of the original Imhotep, but thought the original game was a little too cutthroat for your tastes, then you might really like this version.

If your gaming group mostly consists of playing with 1 friend or your significant other, then this is probably the version for you.

The game retails for about $19.95, and that’s a reasonable price for this game.

I personally prefer the original version of Imhotep, but “The Duel” makes for an excellent 2 player travel game.  It is much simpler to set up and get gaming.  I can easily see myself tossing this game in my luggage for a vacation.  With it’s small footprint, you can easily play this at a small pub table while throwing down some cold ones.