A few years ago, I had an overall positive outlook on Hearthstone.  A major company (Blizzard) took TCG’s and made them very accessible.  Before that, there were very few TCG video games out there, though I enjoyed Baten Kaitos Origins on the Gamecube.  The Magic and Yugioh games were mostly terrible.  This was an opportunity for Hearthstone to dominate such an under supported game genre.  However, years later I still feel like it hasn’t evolved into the game I expected it would.

It’s definitely a clone of Magic the Gathering in nearly every sense, but it’s made simpler so that beginners can learn it in an hour rather than a week.  Cards are moved automatically by the player’s instruction so the player can focus on making in-game decisions rather than worrying where each card goes.  Card effects are simple enough to fit into a sentence, so the player doesn’t have to read long card texts.  With a smaller hand size and card effects which often activate on their own, the player isn’t overwhelmed by too many decisions.  To reduce any headaches on lands (how many to run, which to run, which to use, when you’ll draw them), Hearthstone steadily increases the player’s mana by 1 per turn to make it fair and reduce the player’s capability of building an imbalanced deck.  Additionally, a less cluttered field means that the game is more playable on a 8” tablet.

Hearthstone uses 9 separate classes (each with a different focus) instead of 6 combinable colors like Magic; there’s less customization but also less room to combine colors in a way which may be overly risky or overpowered.  In that sense, Yugioh has gone this route as well.  Instead of 9 classes, there are dozens of archetypes; except each archetype has a smaller card pool and only a few archetypes are viable per format.  To continue on the Yugioh comparison, Hearthstone is a reminder on how bare bones Duel Links is.  While Duel Links has very little element of customization and strategy, Hearthstone does have a reasonable balance.

In my earlier review, I mentioned the positives of crafting, the smooth tutorial, a hassle-free interface, a colorful art style and a vibrant mood overall.  Those aspects still hold up well today.  The game has remained stable, the community grew and it’s a success.  As far as the game being developed into something as deep as full-on TCG’s, not so much.  But I can accept that this game was not designed for the minority of people who want to spend a large amount of time learning a deep card game.

The Dreadful Free to Play Model

The free to play model is still questionable.  In all fairness, real-life card games are expensive.  Also, even Yugioh and Magic’s online TCG’s still charge for their game and expect players to buy real cards.  However, Hearthstone is yet another free to play game that’s a total grind unless you spend a lot of money. 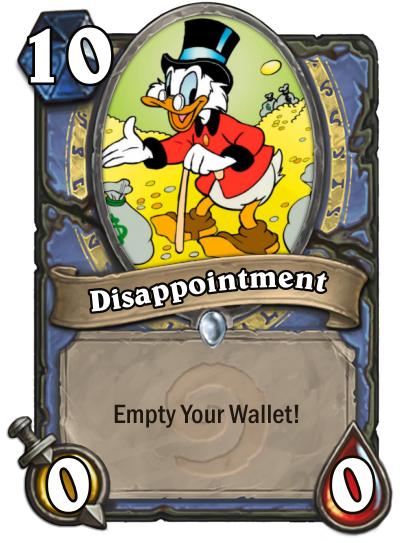 Some will say “This is just what Blizzard always does.  They take a popular genre and dumb it down for the masses to make a quick cashgrab.”  Except, this is not what Blizzard did with Overwatch.  Firstly, Overwatch has a one up-front price of buying the game, and after that, all additional content is free.  I understand, with Hearthstone, it’s harder to get people to pay $40-60 for a 2D card game than an immersive action game, but more still could’ve been done.  While Overwatch is more accessible as a first-person action game rather than a full-on MOBA, it still has many subtle nuanced strategic elements in team coordination and positioning that make a game with such simple abilities have depth.  While I’m not a great Hearthstone player, it never had the depth that other TCG’s had.

To get the majority of cards in Hearthstone, the player has to spend hundreds of dollars.  Real-life TCG’s can get much higher, but paying hundreds for cards I can’t hold in my hand, trade and sell freely is a stretch.  Originally, I thought Hearthstone’s model relied on millions of players spending a few dollars here and there.  But now it seems like most of their money probably comes from people who are addicted to the game or strive to be competitive.

At the moment, Elder Scrolls Legends seems like the better choice.