Halvar, God of Battle / Sword of the Realms – Kaldheim

The newest take on Gods for Kaldheim, and our first spoiler from the set, appears to prognosticate creatures who can also take to the field as a stabulous sword if need be. Halvar, God of Battle is less concerned about durability and more about killing; double strike is quite the payoff for a deck that loads up their creatures Voltron-style, and you even get the ability to shift one piece around for free each turn. This has obvious synergies with cards like Colossal Hammer (high equip cost), but even beyond that, it lets you reposition your tools to do the most damage. A 4/4 is mediocre with no other abilities…but you can oft count on his skillset to offset his intrinsic vulnerability.

Sword of the Realms, by contrast, isn’t an earth-shattering card, but it can be nice to have that as an option when Halvar himself wouldn’t be all that impactful. Halvar himself is pretty powerful, but this presents an incentive to run multiples of the god and benefit. Equipping him with “himself” might happen a couple of times, who knows?

Halvar’s pretty intriguing. I think he’s strong, but he does have the issue of being currently in what’s seen as the weakest single color. I don’t know for sure that he overcomes white’s weaknesses, but he doesn’t exacerbate them, and there will be plenty of shells in white and white-containing pairings where he can create carnage.

Constructed: 3.5 (consider this provisional until I see what else Kaldheim has in terms of equipment)
Casual: 4.5
Limited: 4.25
Multiplayer: 4 (note his wording: each combat)
Commander: 4

This is how it begins. Take up your axe, and hoist the dragon’s head upon the longship’s prow; the battle is about to start. And I presume you’re putting Halvar in a deck that already has auras and equipment in it, so the battle-sweat might start flowing freely the moment you cast him. Double strike is particularly notable in multiplayer settings, as white decks tend to like to win with creatures and all those extra life points make for an uphill battle.

Plus, of course, this card has two faces with completely different card types, a Loki-bargain unique in Magic’s universe. The Sword of the Realms gives a standard combat boost, but many people will be playing it because it makes a creature much harder to kill. You might not always want to use a whole deck slot on just the blood-worm if it were a stand-alone card, but it’s much more worth the investment as an alternate for and with Halvar himself. Also, you might get to basically use a sword as your commander in that format, a brain-teaser worthy of the High One himself. 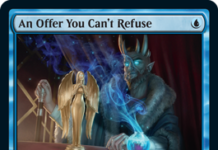