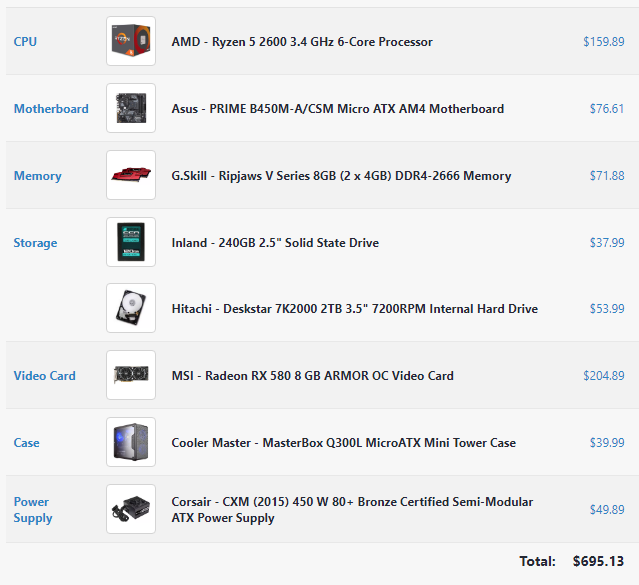 The goal of this build list: bang-for-buck and overall balance.

Inland SSD’s, at the moment, offers the most GB of storage per dollar and has a lot of positive reviews.  Since SSD prices have come down a bit, try to go for a ~250 GB because 120 GB fills up very quickly.  For the hard drive, may as well get 2 TB since it only costs a little bit more than 1 TB.

Ryzen 5 2600 is one of the best deals we’ve seen on a mid-range CPU in a long time, outperforming Intel’s i5-8400 and CPU’s below it.  The 2600 has 6 cores, is overclockable, has improved clock speeds over previous-gen and a decent stock cooler.

8 GB RAM is fine for gaming at the moment.  16 GB offers additional benefits, though marginal, and can be had later.  4×2 for dual-channel, though 2 4GB sticks can be added later.  By the time anything more than 16 GB will be used for gaming, it’ll be time to rebuild anyway.  For Ryzen, go for faster speeds 2666+ MHz and b-die RAM (i.e. Ripjaws V, Trident Z).

Now that AMD’s cards are beyond the mining craze days, the RX 580 is a standout mid-range GPU option.  Brand of video card isn’t that important, though larger cards typically have better cooling than smaller ones.  GTX 1060 is also an option.

How to Record Vocals Professionally