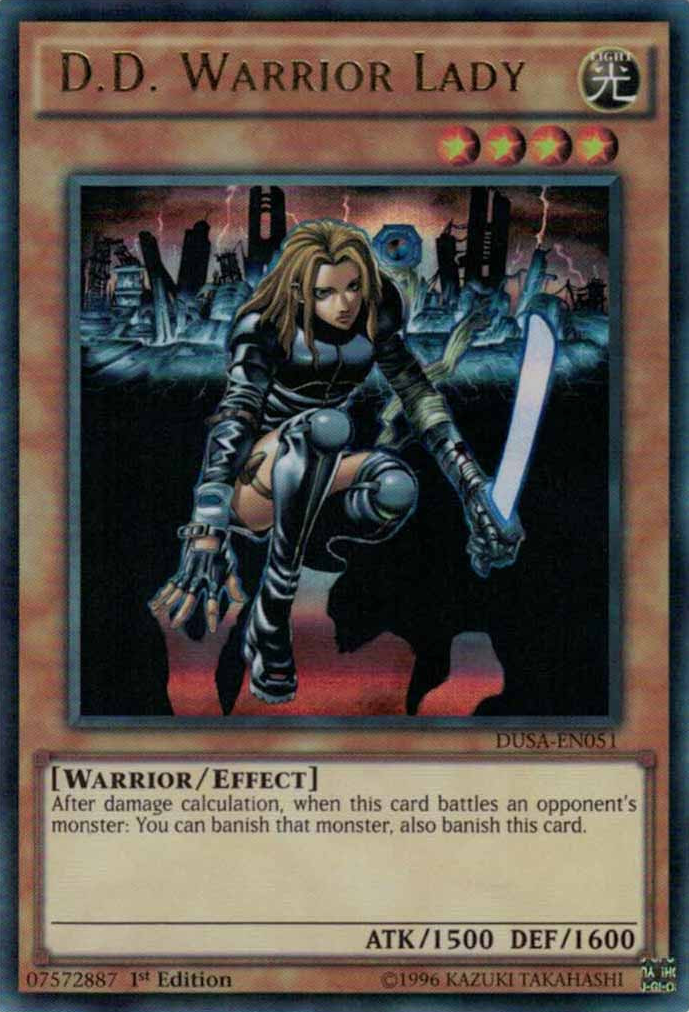 D.D. Warrior Lady is a very useful card in the Goat Format overall, however there is a fallacy that DDWL is a staple and that every deck should use it.  I definitely see the benefits: decent ATK/DEF stats, LIGHT for Chaos, searchable via ROTA, handles recruiters, handles beaters; very well-rounded.

However, the meta of Goat Format (mid 2005) is much different than the meta of which DDWL came from (late 2003).  Before Goat Format was realized, it was a beatdown meta in which DDWL was used to eliminate (or at least threaten) LV4 threats with higher ATK.  However, Goat Format is often about flip effects and avoiding battle entirely.

Against flip effects like Magician of Faith and Magical Merchant, it can destroy them, but it doesn’t interact with or punish them in any way.

Against Scapegoats, DWWL’s attacks are blocked and the opponent can punish it by absorbing it with Thousand Eyes Restrict (TER).

Against TER, it basically does nothing since it relies on combat (and TER blocks attacking).

It loses against Breaker the Magical Warrior and Tribe-Infecting Virus in Attack Mode, which is bad, considering that those monsters are floaters once their effects are triggered.

Yes, it can eliminate Airknight Parshath and BLS – Envoy, but in the former case the opponent +1’s and in the latter case you lose a substantial amount of life points (in a situation in which you may have already lost a lot of life points).

Of course, it has its uses against meta matchups.  It punishes Spirit Reaper and Sangan.  One could definitely make the argument that it counters Tsukuyomi, Dekoichi and Asura Priest due to its survivability in battle, and I wouldn’t disagree.  However, this is also true of basically any monster with good states.  The vast majority of the time DDWL won’t be performing any differently than Skilled White Magician or Skilled Dark Magician.

Am I saying DDWL should never be mained?  Of course not.  Certain decks may want the versatility or they need to use a card like DDWL as an out to certain rogue decks.  However, DDWL should be used with intent and purpose rather than just thrown in because its considered to be a staple.

I’ve made the case of re-considering DDWL as a main deck card.  However, DDWL is still a great card in the side deck because a lot of non-meta decks can be countered by her.  It is a favorable side in against Recruiter Chaos, Zoo/Beastdown, Zombies, Dimension Fusion OTK, Rescue Cat and others engage with those beaters.  Of course, while siding in one DDWL won’t put the matchup in your favor by itself, the versatility that DDWL offers is great for enabling the player to side out as many disadvantageous cards as possible so they can side in more cards that actually interact against the deck they are facing.