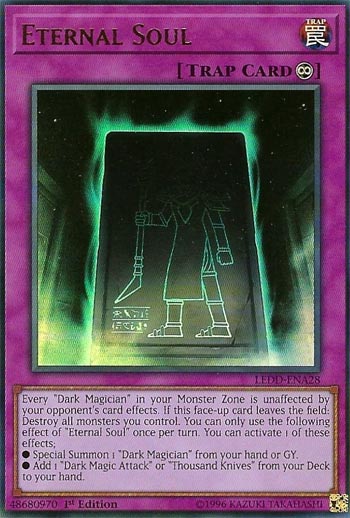 Every “Dark Magician” in your Monster Zone is unaffected by your opponent’s card effects. If this face-up card leaves the field: Destroy all monsters you control. You can only use the following effect of “Eternal Soul” once per turn. You can activate 1 of these effects;
● Special Summon 1 “Dark Magician” from your hand or GY.
● Add 1 “Dark Magic Attack” or “Thousand Knives” from your Deck to your hand.

Eternal Soul is one of my favorite cards as a dedicated Dark Magician player, and today’s Throwback Thursday choice.

Dark Magician get their cornerstone card with this. Special Summon either turn a DM from hand or grave: consistent support for a Level 7 Normal Monster that wasn’t even the best high level monster in the first ever starter deck. All DM’s are unaffected by opponent’s card effect, nothing like blanket protection from stuff like Dark Hole and targeting stuff like Impermanence to strengthen your chances of winning. You can always search a Thousand Knives or Dark Magic Attack, but the odds are you aren’t playing those with better choices available that you can draw. Special Summoning Dark Magician over and over and using him for fodder for Extra Deck summons that need him and don’t are far more important, especially when you pair him with Dark Magical Circle and start banishing cards.

The search would be broken if it were like True Light or Magician’s Rod, but it makes up for it with the blanket effect protection. The destruction punishment is a good balance and can be avoided with Dark Magician the Dragon Knight. It is all about repetitive Special Summoning of Dark Magician, being able to get that Level 7 Normal Monster to put in work for you. You can’t run Dark Magician without Eternal Soul, you’d be a fool if you tried.

Throwback Thursday this week is a card mentioned on Monday and basically a copy-paste from yesterday, though this is the original, and that is Eternal Soul.

Eternal Soul is a Continuous Trap that makes every Dark Magician in your Monster Zone unaffected by the opponent’s card effects, which is just great considering that is behind 2500 ATK (or 3000 ATK if you got Dark Magician the Dragon Knight). Makes your DM hard to get rid of. You got the downside of this going from the Spell/Trap Zone while face-up to grave destroying all your monsters, but it’s a price you are likely willing to pay. Finally, you get two effects to choose from and you can only do so once a turn. First effect lets you summon a Dark Magician from your hand or graveyard, something better to keep doing in Dark Magician over Blue-Eyes mostly cause Dark Magical Circle can keep banishing cards when Dark Magician comes back, which you can keep putting in grave easily being detached as Xyz Material, used as Link Material, or it’s just destroyed in battle. Second effect lets you search for Dark Magic Attack or Thousand Knives directly from your Deck. Sadly not any Dark Magician related Spell/Trap, but that would probably be too good in Dark Magician compared to Blue-Eyes since this Deck is known for its Spells and Traps. Getting a Harpie’s Feather Duster or free monster removal could be nice, though you mainly prefer to just use Dark Magic Attack while Dark Magical Circle takes care of monsters. Overall, a key card for Dark Magician for them to keep doing what they do best, and that’s keeping Dark Magician on the field and removing cards with Dark Magical Circle. 100% a staple for DM in my opinion.

Art: 4.5/5 Like the darker counterpart compared to yesterday, the hieroglyph is pretty cool as well.

Throwback Thursday, if you couldn’t/hadn’t guessed, is Eternal Soul.  I’m not sure what more I can add to this that I haven’t said (yesterday or earlier this week) but still a Continuous Trap, does essentially the same as True Light, with the same unnecessary end result with this card leaving the Field.  This card isn’t really any better (or worse) than it’s BEWD counterpart.  But given that Dark Magician has a larger and better card pool at doing these things, even as referenced yesterday pertaining to BEWD, this card probably isn’t one of the first several I’d go for.  It has its uses, but there’s many a card I’d play over this, and this just isn’t enough to make me WANT to include it.

Art:  3.5/5  I think I kinda like this pic more, the dark and ominous tone is fun, but it doesn’t make as much sense at least in terms of name to card.

Following up on yesterday’s True Light, Throwback Thursday gives us Eternal Soul, the Dark Magician trap that it’s based on. It’s a continuous trap and, while it’s not a Dark Magician card by name, it can still be searched by Magician’s Rod since it contains “Dark Magician” in its text, not to mention it can be directly searched by Magician’s Salvation, reviewed earlier this week. While Eternal Soul is face-up, Dark Magician (or any monster treated as Dark Magician, like Dark Magician the Dragon Knight) is unaffected by your opponent’s card effects, which is one of the most powerful protections in the game. Sadly, if it leaves the field, it will proceed to destroy all of your monsters, likely removing your army of Dark Magicians. Thankfully, the aforementioned Dark Magician the Dragon Knight will protect this card which protects it in turn, and Red-Eyes Dark Dragoon won’t be destroyed at all.

You can only use 1 activated effect of Eternal Soul each turn on a hard once per turn, so you can’t use both if you happen to have 2 Eternal Souls active for some reason. The first activated effect summons a Dark Magician from your hand or graveyard. You’ll be using this one a lot, not only to build up your army of unaffected Dark Magicians, but also to trigger Dark Magical Circle, which banishes one of your opponent’s cards (on both player’s turns, no less!). The second effect isn’t as useful, allowing you to search Thousand Knives or Dark Magic Attack. Still, if there isn’t an immediate threat to banish, you can always search them on your turn. Overall, still a fantastic card for Dark Magician that has withstood the sands of time.

Blackwing – Boreastorm the Wicked Wind – Yu-Gi-Oh! Card of the Day