Den of the Bugbear
– D&D: ADVENTURES IN THE FORGOTTEN REALMS

At first, I was slightly turned around by some of the text on this and other nonbasic lands in Adventures in the Forgotten Realms, but it’s actually the same concept as the Concealed Courtyard/Copperline Gorge cycles.

This means that you might not be able to do things like block with it during the same turn cycle that you played it, but that’s okay. I think it’s outweighed by the fact that you can very quickly overrun an opponent once it does get going, and leaving a token on the table opens the door to a range of other interactions. Cards like Goblin Rabblemaster and Purphoros, God of the Forge like this card a lot better than most of the longer-established creature lands. Plus, it’s fun to say “Bugbear”!

Constructed: 3/5
Casual: 4/5 (anything that helps creature decks not roll over to the overloaded number of sweepers in large card pools is welcome)
Limited: 3/5
Multiplayer: 3/5
Commander: 3/5 (see note for Casual rating!)

Part of the rare cycle of creature lands, Den of the Bugbear is pretty nice as a way for a red deck to keep the gas going in a late game scenario. It’s a decent enough land on its own (and may well see a spot in red decks because of its relative lack of drawback), and while a 3/2 isn’t the biggest body, it attacks with 4 power and as a member of a tribe with a lot of good tribal support. It’s pretty solid; I don’t think it’s quite a force in Constructed to be reckoned with, but it’s a good insurance policy for a color sometimes lacking in those.

Constructed: 3.5
Casual: 4
Limited: 4 (in a late-game scenario where both players are low on gas, this can get you across the finish line)
Multiplayer: 3
Commander: 3.5 (Goblin decks might like this) 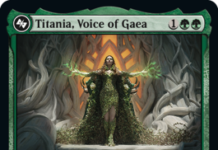