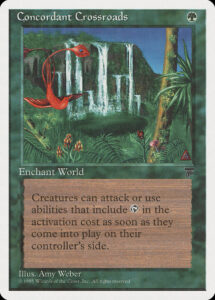 This particular reprint really brings a smile to my face. I used to play with the Chronicles version of Concordant Crossroads back in the 90s, mainly using it to give my War Mammoths haste and admire its art. I was very reticent to take it out of my deck, even when I lost games to it giving other people’s creatures haste! It turns out, though, that when you can use it in a more carefully constructed deck, it’s actually capable of some crazy blowouts. For example, in 93/94 Old School, people have combined it with Eureka to attack with all five of Legends‘ Elder Dragons at the same time. If you use it alongside Chatterstorm, it’s a nice cheap spell to increase your storm count, and also removes your opponent’s one last chance to draw an answer for your 200 squirrel tokens. And Commander decks whose color identity lacks red can use it to get around some big green creatures’ relatively slow speed even when cards like Fires of Yavimaya aren’t available.

Between this and the random World Enchantment in the Mystery Booster playtest cards, I can’t help but wonder if Wizards of the Coast is looking at them again for current design purposes. It might provide a fairer way to have effects like Blood Moon, if they can be removed by a random World Enchantment that benefits you instead. Either way, it’s worth noting that the card type’s legacy lives on in Planechase, which was able to capture the concept of moving the duel to a different plane much more directly.

Well, this is different enough, eh?

Let’s start at the top: the return of World Enchantments to print for the first time since Visions. World enchantments function a bit like, to draw parallels to other TCGs, Field Spell cards in Yu-Gi-Oh! and Stadium trainer cards in Pokémon. Or, at least, older versions. One can be in play at a time, another one coming into play causes the other World cards to be put into the graveyard, and they affect all players. Concordant Crossroads is the only World Enchantment in Double Masters 2022, and while the “world rule” is unlikely to matter, it’s still worth mention.

As for the effect, mass haste is quite powerful…especially in green, since the other sources of mass haste tend to be red. Mass Hysteria from Mirrodin comes to mind, functionally the same in at least 69% of cases. But this being green is subtly powerful, given that Elves is a combo engine that certainly won’t mind having a bit of extra kick in their step!

While the effect is generically powerful, it’s not without risks, as it grants haste to all creatures. It’s unique enough in green to be remarkable, and it’s irreplaceable in a couple decks, but I’m not sure I’d call this a “staple” card. But when Concordant Crossroads shines, it shines.

Constructed: 3 (I believe it’s seen Legacy play from time to time, but it’s mostly a fun piece instead of an irreplaceable engine card)
Casual: 4.5
Limited: 3.5 (potentially rewarding, but not without risk)
Multiplayer: 3
Commander [EDH]: 4 (in particular, some decks can really abuse this like Yisan cEDH shells, and those are decks that can’t run Mass Hysteria as easily)

Koth, Fire of Resistance – MTG COTD – Phyrexia: All Will Be One

Elesh Norn, Mother of Machines – MTG COTD – Phyrexia: All Will Be One