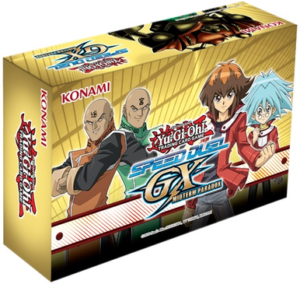 Well looks like we are in for a shock, cause here are the Brothers Paradox. Hello Pojo Readers, Crunch$G here to discuss the latest Speed Duel box, Midterm Paradox. This box set is smaller than the Battle City and Duel Academy boxes we’ve seen in the past, as we only get 4 characters and 12 Secret Rares. This box gives Jaden yet another Deck while also finally giving proper Decks to Syrus, Bastion, and the Paradox Brothers. We also get less Skills in this set compared to the bigger boxes, with just 12 instead of 20. Overall, there’s a few new strategies that are now viable in this box for the Speed Dueling format, so let’s go over everything and see what we got. 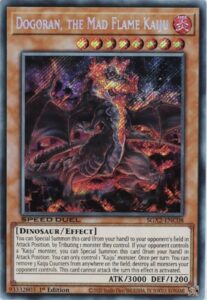 We start off with the Secret Rares for each of the Decks. Of course Jaden was going to get a decent chunk of Secret Rares, so he gets Elemental HERO Bubbleman, Elemental HERO Tempest, and A Hero Lives all upgraded to Secret Rare. Syrus also gets 2 Secret Rares to himself with Drillroid and Super Vehicroid Jumbo Drill both getting the upgrade. Jaden and Syrus also technically get a combined choice for Secret Rare with UFOroid Fighter. Bastion’s Deck also gets 2 Secret Rares with his Water Dragon now matching Hydrogeddon, as well as the Dogoran, the Mad Flame Kaiju in his Deck getting a Secret Rare upgrade. Finally, with the Paradox Brothers being a key part of this product, they get Gate Guardian, Sanga of the Thunder, Kazejin, and Suijin in Secret Rare. 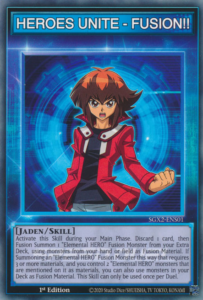 Now we get to the new Skills for each character. Jaden gets 2 new Skills in this set, Syrus gets another 3 Skills, Bastion gets 2, The Paradox Brothers get 3, Chumley gets 1, and both Syrus and Jaden get 1 Skill together. HEROES UNITE – FUSION!! can be activated in the Main Phase once per Duel by discarding a card, letting you Fusion Summon an Elemental HERO from your Extra Deck by using materials from your hand or field as material, or you can also use materials from the Deck if you Fusion Summon a monster that needs 3 or more materials and you already control 2 of the listed materials. HERO World activates at the start of the Duel and can trigger once per turn by targeting a HERO Normal Monster or Fusion Monster and discard a card to activate an effect based on the 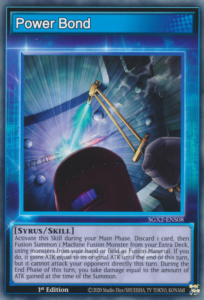 targeted monster’s Attribute with EARTH letting you destroy an EARTH monster you control and a face-up monster the opponent controls, WIND letting you destroy a face-up Spell/Trap on the field, FIRE letting you return all face-up non-FIRE monsters that were Special Summoned to the hand, WATER letting you draw a card and until the end of the next turn letting you use any Normal Trap from your hand, and LIGHT letting you change the battle position of any monster on the field. The Roids are Alright activates at the start of the Duel, letting you Fusion Summon any roid Fusion with Vehicroid Connection Zone, lets you Normal Summon 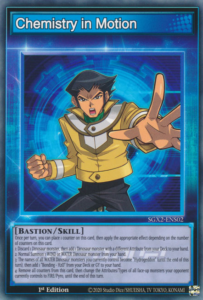 any Level 6 or lower roid monster without tributing, and a non-Fusion roid Machine you control attacking an opponent’s monster lets that has an original Level of 6 or lower gains ATK equal to its Level times 100, but this Skill is flipped over if you control a non-Machine monster. Power Bond is a Skill you can activate during your Main Phase to basically gain Power Bond’s original effect by discarding a card, just the summoned monster cannot attack directly. Small Roid Big City is a Skill version of Megaroid City. Chemistry in Motion activates at the start of the Duel, gains a counter once per turn, and can apply the various effects based on the number of counters on the cards with 1 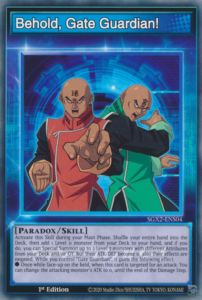 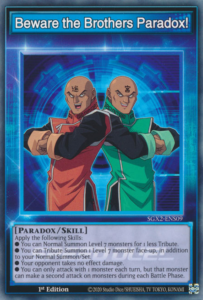 Deck to apply effects based on the monsters revealed where revealing Carboneddon letting a Hyozanryu you control gain 1000 ATK for the turn, revealing Hydrogeddon lets a Hyozanryu you control be unaffected by the opponent’s monster effects for the turn, and revealing Oxygeddon lets you destroy a face-up monster the opponent controls and burns them for 800 damage, and then all the excavated cards return to the bottom of the Deck in any order. Behold, Gate Guardian! is a Skill that can be flipped face-up if you control Sanga of the Thunder, Suijin, or Kazejin and can be activated during your Main Phase by returning your entire hand to the Deck to add a Level 11 monster from 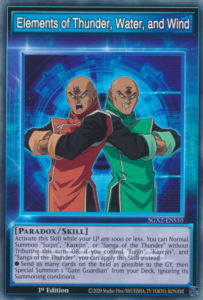 your Deck to your hand and then Special Summon up to 2 Level 7 monsters with different Attributes from your Deck with their effects negated and ATK/DEF becoming 0, also a Gate Guardian you control gains the effect where once while it’s face-up on the field and it’s targeted for an attack, you can make the attacking monster’s ATK become 0 for the turn. Beware the Brothers Paradox! is a Skill that can be flipped over by revealing Gate Guardian, Sanga of the Thunder, Suijin, or Kazejin in your hand and having no cards in the Extra Deck to apply the effects where you can Normal Summon a Level 7 monster with 1 less tribute, you can 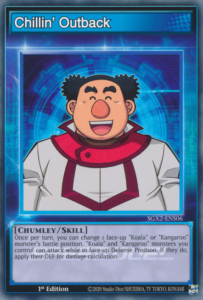 Tribute Summon a Level 7 monster face-up in addition to your Normal Summon/Set, your opponent takes no effect damage, and you can only attack with 1 monster each turn, but it can make a second attack on monsters during each Battle Phase. Elements of Thunder, Water, and Wind can be flipped over when activated and can only be activated when your LP are 1000 or less, letting you Normal Summon Sanga of the Thunder, Suijin, or Kazejin without tributing that turn, or if you control all 3 you can send as many cards on the field to the graveyard to summon a Gate Guardian from the Deck, ignoring the summoning conditions. Chillin’ Outback can be flipped over at 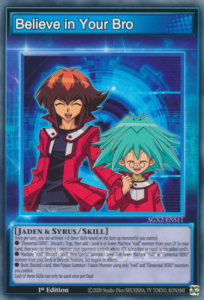 the start of the Duel and once per turn can change a Koala or Kangaroo monster you control to Defense Position, as well as letting your Koala and Kangaroo monsters attack while in Defense Position while applying their DEF for damage calculation. Finally, Believe in your Bro is a Skill that’s flipped at the start of the Duel and once per turn can apply effects based on face-up monsters you control with an Elemental HERO letting you discard a Trap to add a Level 6 or lower Machine roid from your Deck to your hand and then destroy a face-up monster the opponent controls with ATK less than or equal to the added monster’s, a Machine roid letting you discard a Spell to Special Summon a Level 6 or lower Machine roid or Elemental HERO monster from your Deck in Defense Position with its effects negated, and having both lets you discard a card to Fusion Summon a Fusion Monster using roid and Elemental HERO monsters you control, with each Skill only being able to be activated once per Duel. 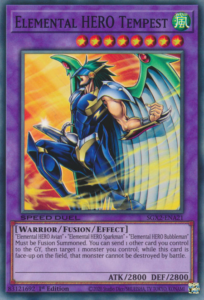 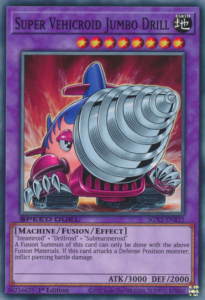 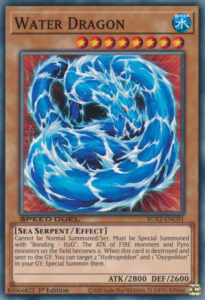 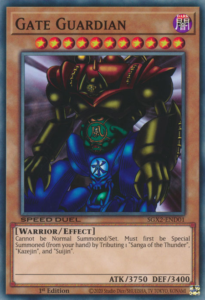 Finally, we get to the Paradox Brothers’ strategy of summoning Gate Guardian as fast as possible. This Deck gets 3 reprints dedicated to it with Soul Exchange, Tribute Doll, and Judgment of Anubis. The new cards in this Deck are Gate Guardian, Labyrinth Wall, Crass Clown, Dream Clown, Jirai Gumo, Shadow Ghoul, Sanga of the Thunder, Kazejin, Suijin, Stone Statue of the Aztecs, Ryu-Kishin Clown, Kaiser Sea Horse, Unshaven Angler, Whirlwind Prodigy, Fairy Meteor Crush, Double Summon, and Labyrinth of Nightmare all making their Speed Duel debut to build your dedicated Paradox Brothers Deck. 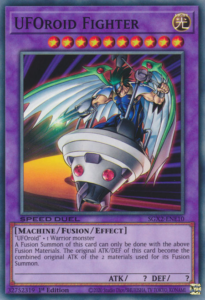 Finally, we get some extra cards in this Deck to boost the Decks in this box or help build other strategies in the Speed Duel format. Des Koala and Sea Koala are both in here as extras for a Chumley Deck, alongside Des Wombat since it’s another Beast he would play. White Magician Pikeru and Pikeru’s Circle of Enchantment are in here since they closely associates with Bastion, Disposable Learning Device since it feels like a Bastion card, and Frost and Flame Dragon and Loud Cloud the Storm Serpent since his Deck might be the best to use them. Jaden also gets Fifth Hope and Elemental HERO Necroid Shaman in here for extra Elemental HERO options. Finally, if you want to play a Jaden/Syrus combo Deck, you got UFOroid Fighter.

This is a fine update to Speed Dueling. Jaden gets a boost while you can finally build a dedicated Syrus, Bastion, and Paradox Brothers Deck if you wanted. The Decks themselves are pretty true to what the characters played in the anime, but I imagine they’ll be edited for more competitve play by players. The three new strategies do look somewhat viable thanks to the Skill support they got. I still don’t know if you can play a Chumley Deck. Bastion did get a lot of Dinosaurs for when Hassleberry arrives I guess. Jaden getting more Fusion options and Skill variety is good. I think the Secret Rares are all right, since these mostly appeal to non-Speed Duel players. Most are collectible besides Dogoran actually being playable, since its better in the actual game than in Speed Duels where there’s anything barely worth tributing over to give the opponent a 3000 ATK vanilla for in this format. Though I will say Bubbleman is nice for past format HERO Decks and A Hero Lives is good for HERO Decks in general. Overall, it’s a decent product for Speed Duels with okay Secret Rares for outsiders.