There is a lot going on in Magic’s long-awaited revisit of Kamigawa. This is true in the set’s design and gameplay, and it’s true in the set’s flavor, too. It’s a busy set, with diversity of concepts, art styles, and moods, much like the modern cities that inspired it. In limited formats, you’ll likely end up jamming spirit-world cards alongside ninjas who look like they stepped out of Netrunner. It’s rare to see such a broad range within one work. There are only a couple of recent things that come close: the Pathfinder RPG’s default setting, Golarion, and Magic itself – and both of these usually corral each concept and mood in its own place, with Golarion having its viking stuff and gothic horror in separate countries and Magic having its in separate planes. In one sense, it’s incredible to see that Magic concepts like the graveyard and library – and planeswalkers – which were designed for high-fantasy Dungeons and Dragons tropes, can be bent to work in such a context. In another sense, though, it’s possible that we’ve all become too fixated on the tropes and not enough on the parts that really matter.

Think about it this way, using an example from a different story. Most of us would say that visitors from outer space belong more to science fiction than to fantasy. So a story about a visitor from a distant green planet who is imprisoned and exploited by an unscrupulous glory-seeker would go into that genre. Its intention is probably along the lines of asking readers to consider how we treat the “other” among us; doing so in a setting with outward elements of advancement questions how much progress we are really making.

Except . . . that plot point is the big reveal in “Tower of the Elephant”, the third Conan story ever published, back in 1933. And since Conan is one of the pillars of modern fantasy, this blurring of genre lines either survived surprisingly late, or has always existed but is downplayed (depending on your perspective). John Carter’s adventures can be summarized imperfectly as Conan in space; C.S. Lewis’ Space Trilogy is heavy on both planet-hopping and demonology, and makes use of Arthurian elements in its third act. The first published campaign settings for Dungeons and Dragons were Greyhawk and Mystara, with the former featuring a crashed spaceship as a high-level dungeon and the latter being shaped by the lost ancient high-tech society of Blackmoor. Speaking of Dungeons and Dragons, its spellcasting system is based on that in a science fiction novel, namely Jack Vance’s The Dying Earth. The influential series Dragonriders of Pern and Helliconia combine sci-fi and fantasy tropes as blatanly as H.B. Reese did with peanut butter and chocolate. Star Wars has a concept – and numerous plot points – lifted from high fantasy and dropped into a science fiction aesthetic.

And I could go on like this. The point is, the place where you draw a line between genres is an individual decision, not an inherent characteristic of the works themselves. And Kamigawa Neon Dynasty usually does a pretty good job at feeling like Magic cards rather than a lost Netrunner set; it seems that if you put a mana cost on almost anything, people will accept it as a Magic card. In fact, to me, the most noticeable thing about it is not the technological elements in a “fantasy” game; rather, it’s the widespread and blatant references to popular culture.

It’s not exactly that these weren’t present in Champions of Kamigawa, but they were much more subtle. There is nothing subtle about Neon Dynasty‘s references: some cards have characters that look like famous Pokemon on them. I spotted at least one Megazord-inspired card, and a character referred to in flavor text who sounds an awful lot like a refugee from Neon Genesis Evangelion. There is a card that quotes Fist of the North Star; there is a sword that looks suspiciously like Cloud’s, and a Turtle Ninja.

If we’re going to ask what parts of Neon Dynasty do and don’t fit in Magic, it would make a lot more sense to be talking about things like this. After all, the premise of Magic’s multiverse has always been that it is literally infinite; in an infinite amount of time and space, everything that can happen will happen, so someone out there was arguably guaranteed to have invented cars and skyscrapers and mechs. But there may be a difference, even if it’s only a gut feeling, between Magic’s cars, skyscrapers, and mechs, and someone else’s.

Yet this just brings us back to the same question: where do we draw the line? If Kamigawa Neon Dynasty feels transgressive, why doesn’t Theros? Are we just blinded by tropes, by the way the former has high levels of technology compared to the majority of fantasy properties? Maybe it’s because the stories that directly contributed elements to Theros are ancient rather than modern – except when they’re not, because alongside the Akroan War just being the Trojan War, Elspeth climbs to Nyx and kills gods just like Kratos does in God of War.

Cyberpunk is one of the most frequently bowdlerized genres. All it usually takes to get that label (and the cool points that go with it) is having some characters hack computers, or implant computer chips in their arms, or interact with AI, or what have you. But the foundational stories of the genre – and the best modern examples of it – pose hard questions. They point out the tension between spirit and technology, reflect on the role of individuals in a world controlled by institutions, and question the nature of identity, memory, and narrative in the age of interconnected information. In that light, Kamigawa Neon Dynasty is an incredible success, because it poses hard questions about what Magic is and where Magic needs to go, questions with no single answer. In that light, it is perhaps necessary at this moment in Magic’s history. 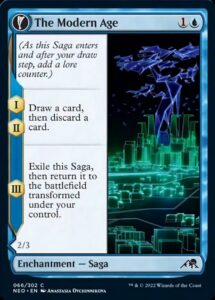 Now, let’s hope it takes less than 17 years for us to visit Kamigawa again.